Has the oil industry made $1 trillion dollars of profit a year for 50 years?

A headline in the Guardian on July 21 2022 claims the following:

[Note that $3 billion/day is roughly $1 trillion per year.] In more detail, one of the sources for the numbers claims:

The rents captured by exploiting the natural resources are unearned, Verbruggen said: “It’s real, pure profit. They captured 1% of all the wealth in the world without doing anything for it.” The average annual profit from 1970-2020 was $1tn but he said he expected this to be twice as high in 2022.

The context of the article is a claim that this profit is so high that the industry can effectively buy any political influence it wants to avoid any limits on its activity. But that is a different question and not relevant to the central claim.

But the key claim feels high on normal definitions of profit and the article seems to fudge this by talking about "economic rents" not profit.

Is the central claim true? And, on what definition of "profit" is it accurate if there is some validity to it?

Has the oil industry made $1 trillion profit on average for 50 years?

It's probably an overestimate, because the OPEC revenues generally did not reach that high, on average. 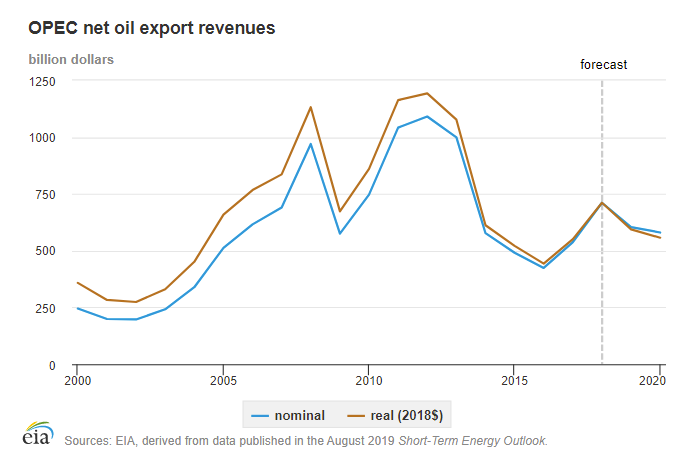 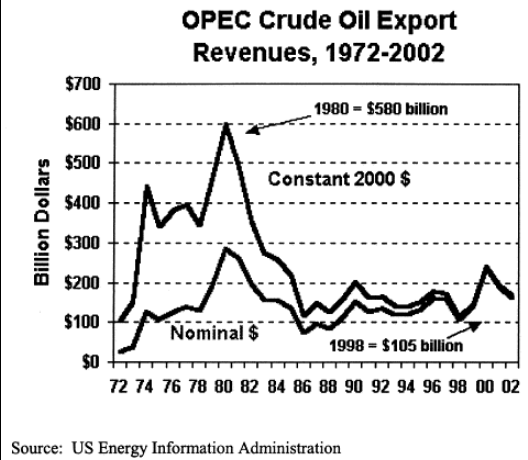 However, coming up with a concrete, true counter-figure for oil profits is probably a lot of work, over such a long time span.

Although the EIA sometimes refers to these revenues as "earnings" or more precisely "net oil export earnings"(which might be source of some confusion), their methodology doesn't seem to indicate any subtractions from the dollar amount, but only from the exported quantity amount (quoting from the 2021 version):

EIA derives net oil exports based on the country’s oil production and consumption estimates from the October 2020 STEO. [...]

EIA assumes that these exports are sold at prevailing spot prices. [...]

Also of note, OPEC produces about 40% of the world's oil. As far as I know, profits in non-OPEC countries are generally less (per barrel), e.g. see this Q/A comparing Canada with Saudi Arabia in that regard.

Now reading the article linked by the OP, they use a different source of data, from the World Bank, so that might not agree with EIA, but I haven't checked... Alas I cannot locate the actual analysis discussed in there. There is one easily found by searching for the author, i.e. Aviel Verbruggen, but it's from 2008, so I suspect they mean a more recent one (and that 2008 one doesn't contain such a calculation). Verbruggen's home page doesn't list anything newer than 2021, so I'm not sure if the paper discussed in the Guardian has been publicly circulated. The Guardian (in the article linked by the OP) says that:

Verbruggen’s analysis used the World Bank’s oil rent and gas rent data, which the bank compiles country-by-country and is expressed as percentage of global GDP. He then multiplied this by the World Bank’s global GDP data and adjusted for inflation to put all the figures in 2020 US dollars.

So it is a somewhat more indirect calculation. It's also not limited to OPEC and includes gas too. At least the oil rent data by the World Bank can be easily located so maybe someone else [here] wants to replicate the calculation... (N.B. gas data is separate.)

The WB metadata says (about the oil rent):

The estimates of natural resources rents are calculated as the difference between the price of a commodity and the average cost of producing it. This is done by estimating the price of units of specific commodities and subtracting estimates of average unit costs of extraction or harvesting costs. These unit rents are then multiplied by the physical quantities countries extract or harvest to determine the rents for each commodity as a share of gross domestic product (GDP).

So it doesn't seem to include profits on any derived products (like gasoline, never mind plastics), as someone suggested in the comments.

Come to think of it, I can see another source of difference now: the EIA data only includes exports, excluding domestic consumption, whereas the World Bank includes the latter.

For Russia, the other major non-OPEC producer, this kind of quick calculation is more tenuous, but assuming around 10% (of GDP oil rents) after 2000, and using their 2020 $1.5 tn GDP, that would give around $0.15 tn rents per year. So somewhat more than the US, but still US+Russia would claim around 25% of those ($1tn) rents.

Now US+Russia+Saudi Arabia do have around 42% of oil production too, and according to my quick calculation above somewhere around 53% of the (putative $1tn) oil rent. So it doesn't look totally outlandish in that regard (as these three probably span the range of production costs), although there's most uncertainty regarding Saudi rent contribution over time, since their GDP drops pretty fast before 2010 (to around 1/4 of the present figure in the 2000s), and it's not clear to me who else made up for the [lack of] large Saudi rents back then.

As to the 3rd significant non-OPEC producer (and 4th overall), Canada, their GDP is comparable to Russia's but their oil rent share more comparable to the US (maybe twice as high, around 1% post 1985), so in the end Canada has a fairly negligible contribution in this oil rent affair, under 2% of the ($1 tn) oil rent, by my estimation. Which illustrates the difficulty of any further "back of the napkin" checks for the claim, as we move down to the (long tail of the) lesser producers.

I suppose one could leverage a more conceptual critique of treating oil rents merely as "pure profit" as the Guardian declares them, because in both Russia and (more so in) Saudi Arabia that's one of the main sources for the state budget (something like 70% in the former and 45% in the latter at least in recent years). If someone said that a state is making "pure profit" by leveraging taxes (which is a common form of revenue for the state budget), you'd probably get more pushback. E.g. oil production in Saudi Arabia is taxed at 50% - 85% compared to <20% for other activities. So while it's technically correctly to treat resource rents as pure profit, the government's share thereof, in the form of taxes, may be quite high in some of these cases.

Addendum2: as TimRias seems to have tried to replicate the whole calculus, he seems to get $1.5 tn rents for oii in 2018 (in his graph), but from the World Bank's own publication that was only $ 1tn. Even accounting for 2018-2021 inflation, that doesn't seem to fully explain the difference. 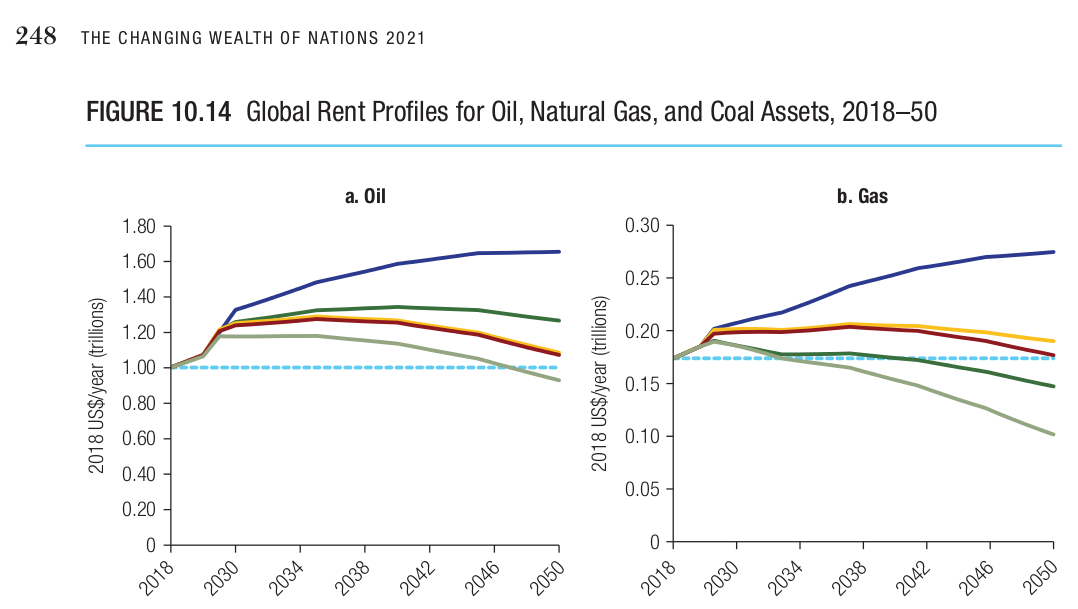 (Alas, as you can see, most of the WB focus is on future projections, at least in that publication.)

Based on a sentence on p. 233, I think it's very likely that the baseline from the graph above is the average for 2014-2018 though... which in TimRias' graph is $1.12 tn by my calculation; that would be much more easily explained by the inflation when translating 2018 to 2021 dollars.

The numbers check out if one used the data provided the WorldBank. In particular, the world bank provides data on the so called "Rents" for Oil, Gas, and Coal. The Oil Rent is defined by the WorldBank as

Oil rents are the difference between the value of crude oil production at regional prices and total costs of production.

And are given as a percentage of GDP. (And similar for Gas and Coal.) The complete methodology for collecting these numbers is described here.

So, if we take the various annual rents for the region "World", and multiply with the annual "World" GDP for the WorldBank data (expressed in 2015 USD), and further correct for the difference between 2015 and 2021 USD, we obtain the total money earned each your from mining Oil, Gas, and Coal, inflation corrected to 2021 USD.

This gives the following graph: 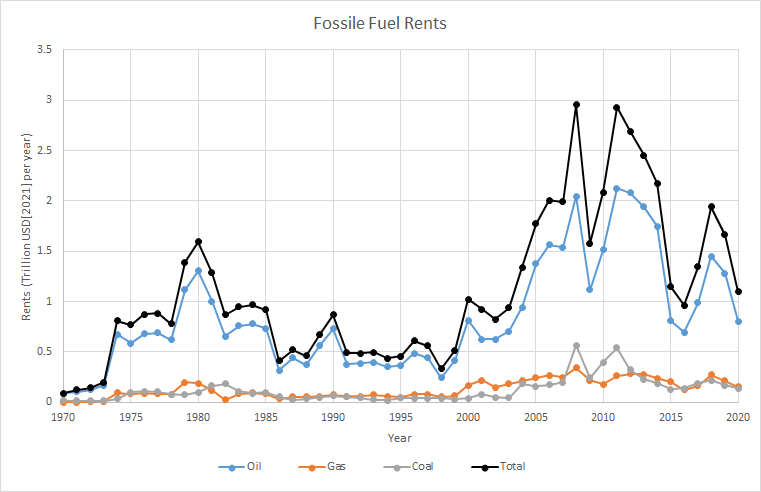 This makes it clear that the precise notion of "profit" used as the basis of the claims in the Guardian is that of a "rent". The difference between production value and production costs. In a newspaper it makes sense to refer to this profit rather than the technical economical term "rent", since the latter to the average UK reader would refer to the amount of money you pay a landlord to live in their house.

However, it is worth noting that the rent produced in this way is not all directly flowing into the pockets of private companies. A significant fraction of this rent will end up in state coffers, either through taxes, or state-owned oil (gas/coal) production companies.

On the other hand one should note that the oil/fossil fuel industry as a whole is much bigger than just the production of raw products. The notion of rent does not capture the economic activity of refining to derived products (gasoline, plastics, etc.) and the margins made when selling these to final consumers. The total economic interests of the fossil fuel industries are therefore under estimated by just the "rent" numbers.

Not the answer you're looking for? Browse other questions tagged economics fossil-fuel business .