Did the Russian government have a 20 billion Euro budget surplus in the first half of 2022?

Various German media outlets (including the Tagesschau) have reported, that the Russian state has made a 23 billion Euro surplus in the first half of 2022.

Despite the sanctions, Russia achieved a budget surplus of around 20 billion euros in the first half of the year.

According to official figures, Russia achieved a budget surplus worth more than 20 billion euros in the first half of 2022 despite the war and sanctions. In total, the plus is 1.374 trillion rubles (about 23 billion euros) thanks to increased revenues, the Finance Ministry announced according to the Interfax news agency.

— English translation from the Tagesschau link

This is supposed to be due to increased oil and gas prices but the numbers are from the Russian state. Do the amounts of oil and gas exported from Russia support these claims?

It is plausible based on trade data. Last year Russia's state budget was made by some 45% from energy exports. Prices for those are some 60% higher than last year, while in the first half of this year the reduction in exports volume from Russia has been pretty negligible overall. The US probably had the strictest ban, but they hardly import Russian energy products directly. You can read the whole analysis in the NYT based on a CREA report

In 2021, revenue from oil and gas alone made up 45 percent of Russia’s federal budget, according to the International Energy Agency. [...]

Russia earned what is very likely a record 93 billion euros in revenue from exports of oil, gas and coal in the first 100 days of the country’s invasion of Ukraine, according to data analyzed by the Center for Research on Energy and Clean Air, a research organization based in Helsinki, Finland. About two-thirds of those earnings, the equivalent of about $97 billion, came from oil, and most of the remainder from natural gas. [...]

The research found Russia’s export prices for fossil fuels have been on average around 60 percent higher than last year, even accounting for the fact that Russian oil is fetching about 30 percent below international market prices. [...]

As for volumes, not much change in the first 100 days.

The European Union made most progress on reducing its imports of natural gas from Russia, buying 23 percent less in the first 100 days of the invasion than the same period the previous year. Still, income at Gazprom, Russia’s state-owned gas giant, remained about twice as high as the year before, thanks to higher gas prices, the Center for Research on Energy and Clean Air found.

The European Union also reduced its imports of Russian crude oil, which declined 18 percent in May. But that dip was made up by India and the United Arab Emirates, leading to no net change in Russia’s oil export volumes, the research showed. India has become a significant importer of Russian crude oil, buying 18 percent of the country’s exports over the 100-day period.

The United States has made a dent in Russia’s earnings, banning all Russian fossil fuel imports. Still, the United States is importing refined oil products from countries like the Netherlands and India that most likely contain Russian crude, a loophole for oil from Russia to make its way to America.

This figure from the report itself is probably the most useful (alas it only covers a single month): 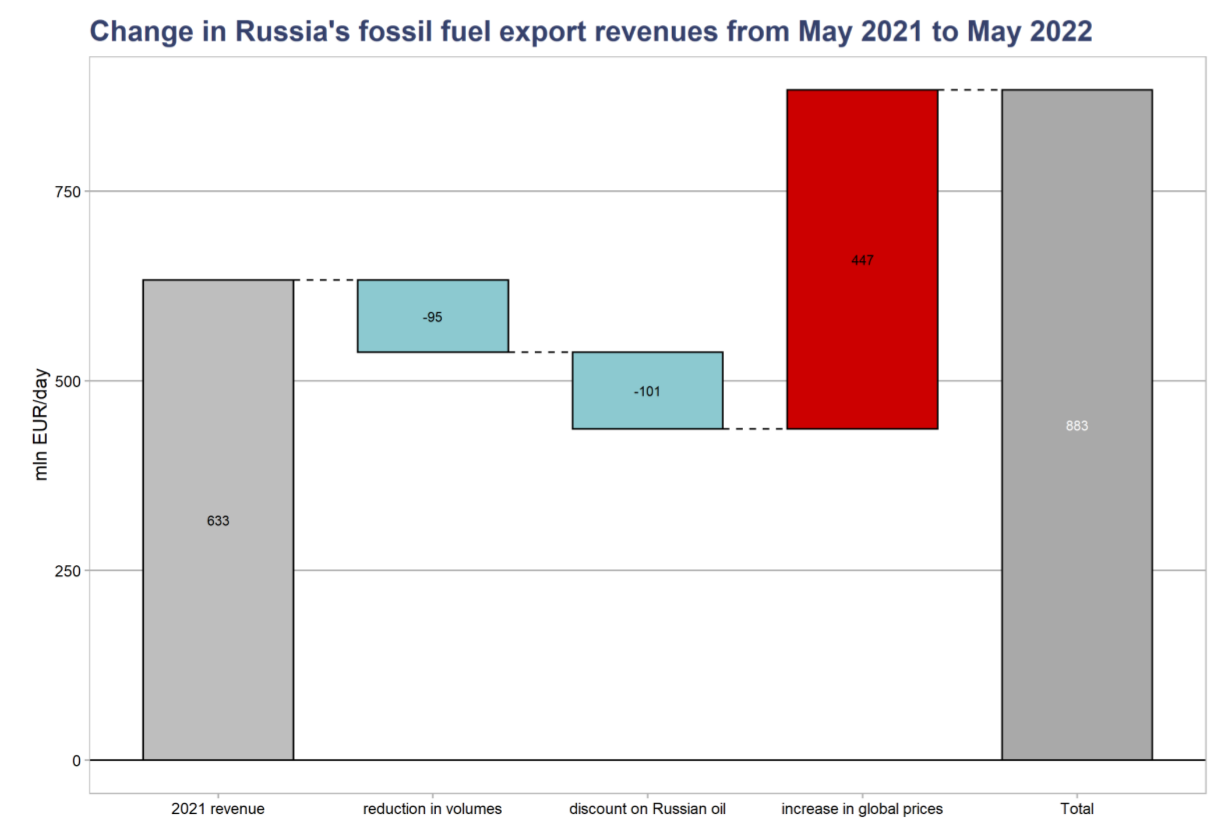 That's some 250 million euros extra income per day, compared to last year. Assuming they were close to break even in their state budget last year (I haven't really checked) times 100 days or so would give an extra 25 billion euros. So that's already more than their claimed budget surplus.

However, since you're talking about Russia's budget surplus rather than trade balance, the exact surplus can't really be confirmed from external sources, which don't know any better how much Russia's government is really spending in their own country (or war). (One would also have to take into account the 10% or so reduction in retail activity [seemingly a few months in a row], which would result in some VAT income decrease etc.)

For whatever that's worth (since the OP wants non-Russian sources, but I'm being egged on in comments that the translation in original article may be wrong), TASS says

ST. PETERSBURG, June 16. /TASS/. The Ministry of Finance estimates the federal budget deficit at the end of the current year at 2% of GDP, Finance Minister Anton Siluanov said on Thursday. [...]

According to the minister, the current federal budget surplus is rather conditional, it currently reaches 840 bln rubles ($14.44 bln). "In general, we have a budget surplus, a conditional surplus, because all spending will go towards Q4, when we have to use all resources," the Siluanov said.

Siluanov added that about 3-4 trillion rubles ($51.59-68.79 bln) from the National Wealth Fund of Russia will be allocated to finance the budget deficit.

Russia will start restricting public access to some government data in an attempt to protect the country from additional sanctions, the finance ministry said on Tuesday.

In a statement, the ministry said it will partially restrict the information about budget spending it makes public in response to the "negative consequences" of sanctions on the Russian economy.

The energy ministry has restricted access to its monthly oil and gas output data, a number of big companies were not allowed to disclose their financial statements and the central bank has also limited some data release.

Not the answer you're looking for? Browse other questions tagged economics russia .

10
Did the "Russian Sleep Experiment" happen?
67
Has the Red Cross raised half a billion dollars for Haiti to build 6 houses?
18
Were the "DNC leak" emails stolen by the Russian government?
7
Did the US national debt fall by $100 billion in the first two months of Trump's office?
30
Was Ukraine planning an attack in Donbas/Crimea prior to the 2022 Russian invasion of Ukraine?
3
Did Putin claim that the predominantly Russian-speaking Donbas region is pro-Russia?