Did America change size in NASA photos over the last 50 years? 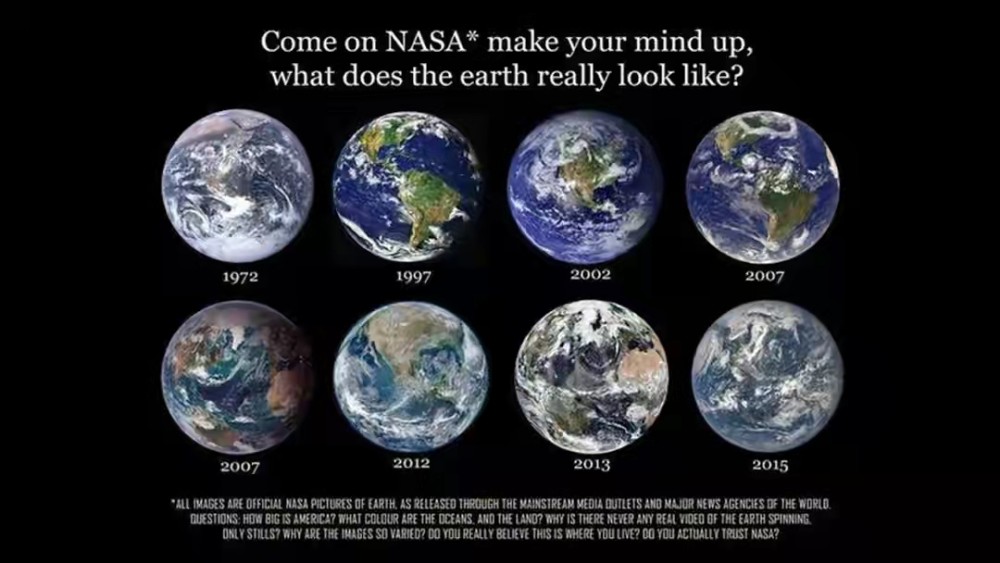 Caption: Come on NASA* make your mind up, what does the Earth really look like?
*All images are official NASA pictures of Earth, as released through the mainstream media outlets and major news agencies of the world. Questions: How big is America? What color are the oceans, and the land? Why is there never any real video of the earth spinning, only stills? Why are the images so varied? Do you really believe this is where you live? Do you actually trust NASA?

I'm not exactly sure where this image originated; I first saw it on this Chinese news article about flat earthers. I found similar images here, here, here and here via image search.

The above image has a lot of claims; here I'm only talking about...

How big is America?

(The rest are just "that's how [cameras/weather/space] works".) But in the 2012 image especially, America (the continent) looks bigger, and Britannica cites it as a NASA photo from 2012:

I guess it's because the photo was taken closer up than the others, but I'm not sure.

Question: Did America change size in NASA photos over the last 50 years?

The 2012 photo makes Mexico and the US look big because the photo is from the Suomi NPP satellite which is only 518 miles above the surface of the Earth. So it is only 518 miles from Mexico, but several thousand miles away from other points on the hemisphere and much less than an entire hemisphere is seen.

So it is not comparing like with like. In the images where America is off to one side, of course it looks smaller, because the Earth isn't flat: it is a globe.

There are only two images where America is reasonably central (2002 and 2012). In 2002 America, the largest part of the land mass is partially obscured by cloud, so at first sight it does look smaller. The 2002 America is also a bit further north, and this too makes it look smaller, as it is less central that in 2012.

Did America change size in NASA photos over the last 50 years?

No, America has remained the same size, apart from a few centimetres of tectonic plate movement. However due to spherical geometry it does appear to be smaller when not central.

Q. What does the Earth really look like?
A. The distance shown is about the distance of the moon, so very few people have even seen the Earth from that distance. The rest of us have to make do with pictures.

Q. How big is America?
A. This is a rhetorical question, and can be found in numerous references.

Q. What color are the oceans, and the land?
A. Their color varies with weather, time of day, angle of sun, and the camera used. As an observer on Earth, the ocean varies in color from day to day, even from minute to minute.

Q. Why is there never any real video of the earth spinning, only stills?
A. There is, see live streaming video from the space station. At a greater distance, the motion is so slight as to be pointless taking videos. The ones released by NASA (from around this distance) are made from stills, wherein the Earth apparently rotates considerably faster than in reality.

Q. Why are the images so varied?
A. Because of different position of the camera, weather etc.

Q. Do you really believe this is where you live?
A. I don't live there.

Q. Do you actually trust NASA?
A. This is the punchline of the propaganda pitch, which begins with an absurd claim, progresses to ridicule, and finally attempts to undermine the credibility of NASA, and by implication, the whole of America.

Not the answer you're looking for? Browse other questions tagged nasa earth .

174
Did NASA invest a million dollars in the research of a space pen, when the USSR simply used a pencil?
19
How much has Magnetic North shifted in the last few years and would this affect aeronautics?
27
Did NASA receive a tax refund on a diamond window when it left the Earth aboard a space probe?
19
Did NASA refuse to pay a $400 fine for littering caused by the deorbiting of Skylab?
1
Did NASA use CGI for the Apollo mission trainers?
3
Why did the value for "average surface temperature of Earth" change from 15°C to 14°C in some scientific literature concerning climate change?