Most sources I found imply that animal agriculture uses much more land and resources per unit of nutrition compared to plant agriculture for human consumption. A quick Google search shows that this is the most commonly held view in scientific circles.

However, CGIAR paints a different picture. They are saying that 86% of food fed to livestock is inedible by humans anyways!

They are basically arguing that we mostly feed the animals byproducts from agriculture for human consumption, and therefore, this is a good use of resources and not wasteful.

I am sure this is a complicated topic, especially when it comes to defining what is a byproduct, what is the main-product, etc.

Does this claim hold up to scrutiny? 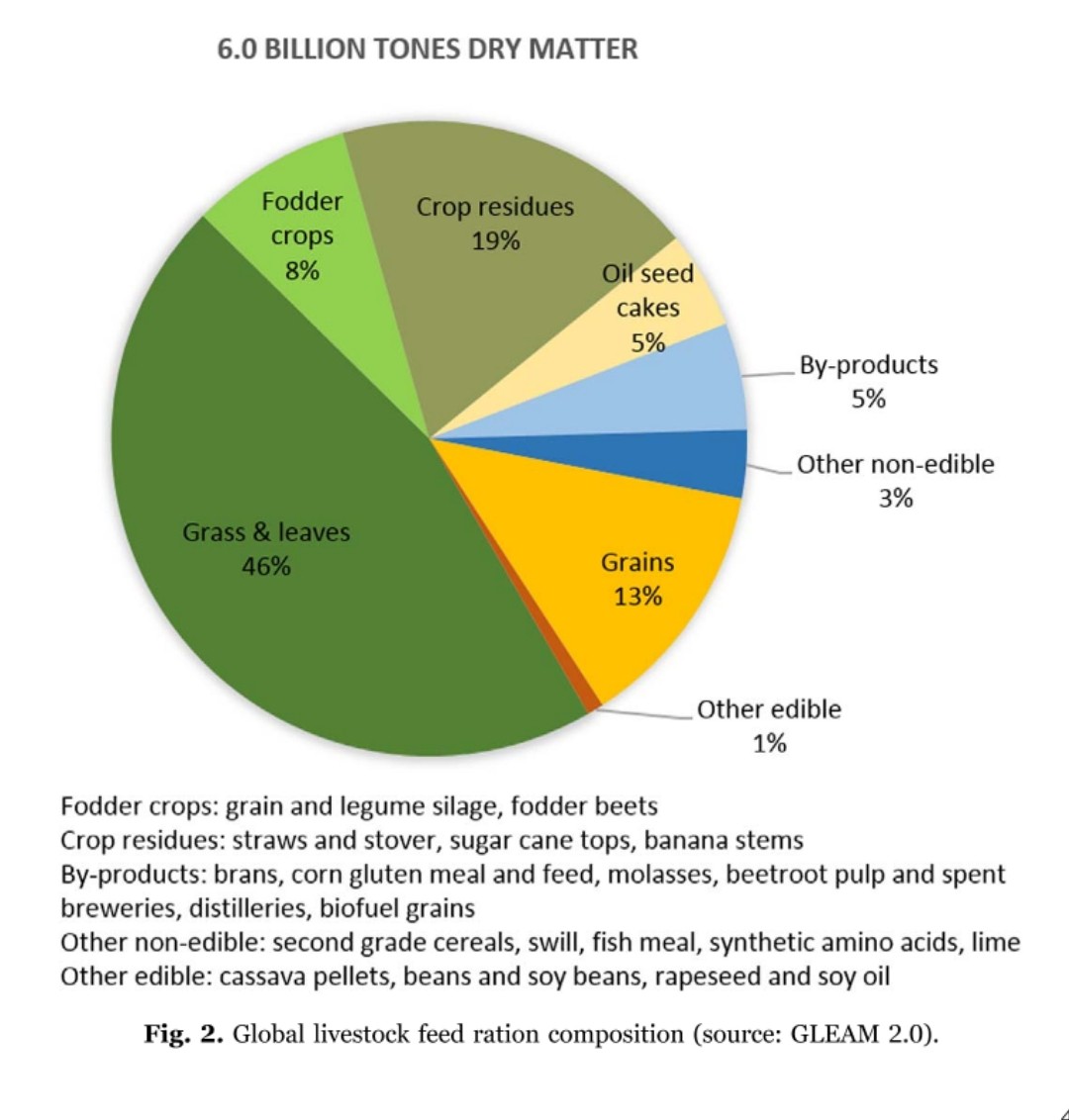 As far as the grassland goes, around 2 billion hectares is used, of which 685 million is considered suitable for crops.

A further 560 million hectares of land is considered in use based on:

This is 40% of total arable land

Therefore there is 1250 million hectares of land from the arable land and the convertible grassland that could be used to grow human crops instead of for animal feed. This is roughly the global area currently used for arable land.

So in terms of feed, yes, most is inedible for humans.

In terms of whether the land would be better allocated to human crops is not quite clear from the study.

This is not clear because e.g. it is given that 0.3kg of human-edible protein is fed to cattle per 1kg of output, however the total input is 195kg (of grass), whereas especially for OECD countries, 2/3 of grasslands are suitable for growing crops (for non-oecd 1/2).

For chickens, pigs, etc. there appears to be around 3-5kg human edible protein per kg of protein output.

So yes, most feed is inedible grass, but the overall figures are achieved by conflating e.g. cattle with chickens, eggs with meat, etc.

In fact a lot of quality agricultural land is used for animals, but then the study does note that cattle manure is a major source of fertiliser, so it's not as simple as protein in and out

In terms of the original claim, I would say that it is accurate but not very useful, because if we remove all our wheat fields and graze cattle there on grass, resulting in no flour/bread, that doesn't mean cattle are not a pressure on land use.

(Agricultural policy in the EU/UK, probably other countries, encourages grassland through subsidies. I am not familiar enough with the detail on this, and the political reasons for it, but there are questions about for example export vs. self -sufficiency, food security etc., which might be informing land use.)

Not the answer you're looking for? Browse other questions tagged agriculture food-production .