Are chemicals used to ripen fruit in developing countries harmful to the health of consumers?

Note: there are some answers to this question on Chemistry.SE, but I prefer a sceptical approach here.

Hi everyone, I bought some mangoes today and the seller told me they had been ripened chemically with "karbit". I checked on Google and I saw that karbit was Calcium Carbide, a carcinogen that is banned in several countries. I tried in another shop and the mangoes there were "karbitan" as well. Finally, in a third shop in Pasar Semat Sari, the seller had both "karbitan" and "masak pohon" mangoes (tree ripened mangoes). This was the first time I heard of this and I wonder if this chemical ripening is really that common in Indonesia. Also, does anyone know if this “karbit” is as harmful as I read it was?

In my experience from talking to a banana seller in Indonesia nearly all their bananas are ripened with 'karbit', although sometimes not.

Indonesia has poor use of accurate terminology, so I was also doubtful whether 'karbit' is necessarily in fact calcium carbide.

To answer my last point first, I checked a local shopping site (which sells EVERYTHING), and 'karbit' or 'carbide' is indeed often not carbide at all.

Several sellers sold 'karbit' which was in fact ethephon, including the brands 'Orbyte', 'Ethrel' (by Bayer), etc. This is priced around $1.70/100 ml, and is 480g/litre of ethephon, applied by spraying. https://www.bayer.com/en/id/ethrel-480-sl In fact anything calling itself 'liquid karbit' is not carbide at all. https://www.tokopedia.com/search?st=product&q=karbit%20cair&srp_component_id=02.01.00.00&srp_page_id=&srp_page_title=&navsource=

"The toxicity of ethephon is very low,1 and any ethephon used on the plant is converted very quickly to ethylene.6

The use of this chemical is allowed in the European Union."

A 2021 story from India claims

"Ethephon is registered as an insecticide", and is "equally dangerous to public health"

This first is an interesting, possibly misleading claim; it appears that Ethephon is marketed mostly as a plant growth regulator.

Despite the fact that it may have such effects, and some insecticides are ChEIs, it does NOT appear to be accurate to describe it as an insecticide.

Further down the same article and in other sources, it appears that ethephon is NOT in fact registered as an insecticide, but may contain 'traces of insecticide' https://www.thehindu.com/news/cities/Hyderabad/why-permit-ethephon-usage-hc-asks-centre/article32469205.ece

This article includes the particularly pointless statement "The bench remarked that number of cancer patients in the country had gone up in the past three decades." which is rather irrelevant given recent use of Ethephon and lack of evidence for causation.

The basic mechanism for ethephon is the production of ethylene gas, the chemical C2H4, which naturally ripens fruit.

While I found a 20% sachet of 0.6g from China https://westchemicals.en.made-in-china.com/product/gwBTShKCSUry/China-0-6g-Bag-Fruit-Plant-Growth-Regulator-Mango-Banana-Ripener-Ethephon-20-Gr.html there are many other formulations

Speculating about whether talcum powder, which MIGHT contain asbestos, and which is probably not the best thing to liberally sprinkle on yourself every day after bathing due to a cumulative exposure risk, could somehow pose a risk to consumers of fruit which had been ripened in proximity to the same is rather ridiculous.

There is a rather detailed peer review of ethephon for use as spray on wheat and barley in the EU. https://efsa.onlinelibrary.wiley.com/doi/epdf/10.2903/j.efsa.2006.174r

Ethephon was found NOT to be carcinogenic, and an acceptable daily intake of 0.03mg/kg was set as 1/1000 of the NOAEL (no adverse effect level) in dogs. Ethephon, like almost any substance, has a lethal dose (LD50), which is 1.564g/kg (cf. table salt at 3g/kg). However it is better considered to be corrosive, a skin irritant, and not to be inhaled - it is unlikely anyone would consume such a quantity accidentally.

Checking on Youtube, I found that ethephon is used by banana sellers in Indonesia who mix it with water and either spray or brush it onto the fruit, before putting it an box for several days:

Since ethephon does not appear to be a dangerous chemical, and is applied to a banana with thick skin, then the credibility of claims that it is harmful, and claims about 'traces of pesticide' appear to be totally fanciful.

Other EU reports suggest that ethephon is not likely to be harmful e.g., when used to ripen Japanese persimmons https://www.efsa.europa.eu/en/efsajournal/pub/4747

However, I also found actual calcium carbide on sale in Indonesia and in use according to Youtube videos to ripen fruit. 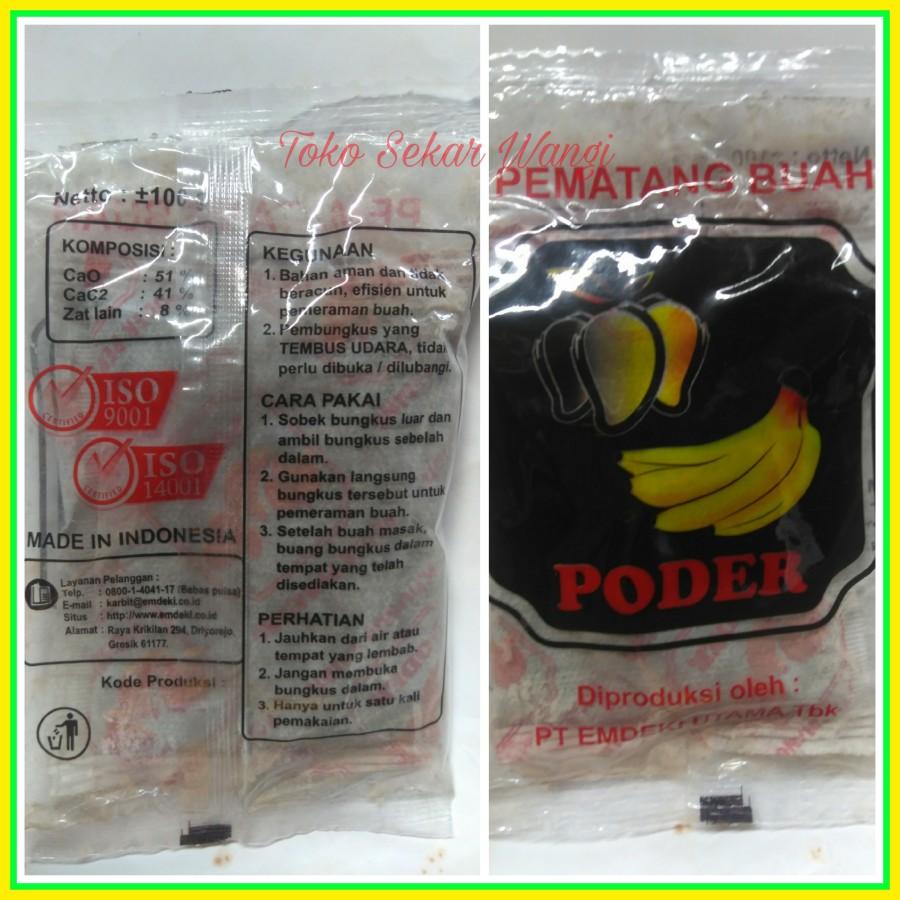 This is 51% calcium oxide (lime), 41% calcium carbide, and slightly alarmingly 8% 'other matter'.

As far as calcium carbide goes, according to this 2015 story, a judge in Hyderabad called those who used it 'worse than terrorists' https://www.newindianexpress.com/states/telangana/2015/aug/23/Meeting-to-Curb-Carbide-Menace-803504.html

Calcium carbide is indeed explosive, as noted at Chemistry Stack Exchange. According to this, a box of mangoes exploded after it was deliberately set on fire: https://indianexpress.com/article/blogs/why-you-should-never-site-fire-to-a-box-of-mangoes/

There are a variety of poorly written articles from India claiming it is harmful:

A false statement in that calcium carbide is literally CaC2, and does not necessarily contain any arsenic or phosphorus, although of course impure calcium carbide might contain this.

However it appears that carbide does contain arsenic, in general, due to the way it is produced.

by Chandel et al claims 0 arsenic in untreated fruit, which I find rather suspect, as other sources would suggest 0.6-50 ppb arsenic in mango in Hainan, China from soil: https://www.researchgate.net/publication/259127041_Occurrence_of_arsenic_in_fruit_of_mango_plant_Mangifera_indica_L_and_its_relationship_to_soil_properties

Chandel et al show dipping in a carbide solution causes arsenic both on the skin and in the pulp, and likewise using carbide powder. The study found 85 ppb of arsenic in mango pulp market-purchased samples, and between 30 and 60 ppb dipping fruit in carbide solution or using carbide in a box. Although this might sound alarming, infant rice cereals have tended to have higher levels of arsenic than this: https://www.fda.gov/food/cfsan-constituent-updates/fda-makes-available-results-testing-infant-rice-cereal-inorganic-arsenic - 100ppb is the FDA's target

shows up to a maximum of 5 ppb in their naturally ripened samples, while the highest levels of arsenic were achieved by using 2% calcium carbide in a closed container, of 280 ppb.

It is stated that by dissolving the carbide in water, the arsine gas is released, which means less is transferred to fruit dipped in such a solution, compared to the 'calcium carbide' simply being placed in a box.

Another study from Malaysia found that higher levels of carbide were used to ripen mangoes compared to bananas, but both resulted in arsenic levels far below maximum FDA levels of 1000 ppb. https://mjas.analis.com.my/mjas/v25_n2/pdf/Nurasmat_25_2_9.pdf

While arsenic is clearly highly toxic, the study TOXIC LEVELS OF ARSENIC AND PHOSPHOROUS FOUND IN SOME COMMONLY CONSUMED FRUITS SOLD IN THE MARKET IN BENIN CITY notes that there is a tolerable upper intake of phosphorus of 4g/day. While I have not verified this, clearly phosphorus is not toxic in the way that arsenic is. In fact, phosphorus is a required element for human health, at 700mg/day RDA, or 1250mg day for adolescents (https://ods.od.nih.gov/factsheets/Phosphorus-HealthProfessional/). It does not seem plausible that phosphorus impurities from calcium carbide could be injurious to human health given this fact, and the much higher doses (cf. arsenic) required for toxicity.

The study noted that fruits purchased in Benin contained 24 ppb arsenic for mango pulp, 66 ppb for banana flesh, 23 ppb for plantain, and 97 for avocado, compared to zero for the sample they artificially ripened using carbide (perhaps their carbide was arsenic-free?).

In general both acetylene (from CaC2 (carbide) + 2H2O (water) -> C2H2 (acetylene) + Ca(OH)2 (slaked lime), and ethylene (C2H4) will ripen fruit. Ethylene is the signal for ripening in nature. Climacteric fruits can ripen after harvesting using ethylene, while non-climacteric fruits must be harvested when ripe: https://extension.umd.edu/resource/ethylene-and-regulation-fruit-ripening

The study by Khan et al5 shows substantial variance in Vitamin C levels between an unripe banana (2100ppm), a naturally ripened banana (400ppm), one treated with ethephon (270ppm), and one with carbide (850ppm). Sugar levels were much more constant, at around 10% for the unripe banana, and 21-22% for the naturally and artificially ripened versions.

The article by Khan et al claims 'In carbide samples, arsenic content was found as high as 160 ppm which is much higher than the permissible limit set by US FDA (0.5–2 ppm)', however, this does not seem to be correct; there is a limit of 10 micrograms per cubic metre of air. (https://www.atsdr.cdc.gov/csem/arsenic/standards.html) It is not quite clear what exposure there would be from mixing impure calcium carbide with water, and using it to treat bananas and other fruit. However it seems that there could well be an occupational risk to the workers as a result of this exposure, albeit that arsenic-free carbide appears to exist.

As far as consumers go, while the data show that carbide use tends to result in increased arsenic, on the skin and pulp of fruit, arsenic is present in food anyway, and none of the data here really suggest that the uses for ripening fruit in developing countries result in dangerous levels of arsenic.

EU law provides for a limit of inorganic arsenic of 100ppb in infant rice, and between 200 and 300ppb otherwise, though rice can contain up to 2000ppb.

Although artificially ripened fruit will taste, feel, appear and have somewhat different vitamin profiles from naturally ripened, it is not true to say that these fruits have no vitamins or other similar fanciful claims.

Not the answer you're looking for? Browse other questions tagged safety chemistry fruit .

9
Is "Malenium Polycarbonate" (from blue-blocking sunglasses) real?
8
Are dioxins the most toxic chemicals known to science?
7
Are synthetically produced chemicals not found in nature more likely to be harmful than naturally occurring ones?
22
Do harmful chemicals migrate from the container into the food if you microwave the food in a plastic container?
5
Are harmful chemicals leached from ordinary Ziploc bags when used for sous vide cooking?