Did Dmitry Rogozin, chief of Russia's space agency, get photographed performing a Nazi salute in the 1990s? 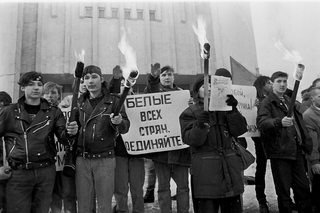 In the context of Russia's invasion in Ukraine, it could be a fake.

A time-limited google search yields only one match for 'рогозин "белые всех стран"' before 2014, when the war started, and the single match doesn't seem to be related to the photo; it's a text on Russian nationalism. The picture seems to have first surfaced c. 2018.

Sergey Smirnov, editor-in-chief of the Russian government-critical Mediazona outlet, tweeted in 2018 "I am so tired of the fake with the Nazi-saluting Rogozin" in an apparent reference to that photo.

So, is it a correctly-attributed authentic photo?

Note that there seems to be a legitimate video of Rogozin giving a speech at a neo-Nazi rally in Moscow c 2007, and his Twitter activity leaves little doubt that he's a Russian nationalist and racist. My questions is about the 1990s photo.

30
Did a Turkish cargo ship get bombed in the Black Sea during the Russian invasion of Ukraine?