Has a weapon functionally equivalent to the AR-15 been available for U.S. civilian purchase since 1907?

According to a (since-deleted) widely shared LinkedIn post (emphasis added):

A hundred and twelve years ago, in 1907...our great grandparents were first able to buy the rifle pictured. The semi-auto Winchester Model 1907. This is a gun they could buy from a Sears catalogue and have delivered via US Post. It was/ is a semi-automatic, high powered centerfire rifle, with detachable, high capacity magazine. About 400,000 semi-automatic rifles were produced before WW2. Civilians had hundreds of thousands of these for 40 years, while US soldiers were still being issued old fashioned bolt action rifles.

The 1907 fired just as fast as an AR15 or AK47 and the bullet (.351 Winchester) was actually larger than those fired by the more modern looking weapons.. The ONLY functional difference between the 1907 and a controversial and much feared AR15 is the modern black plastic stock. [...] 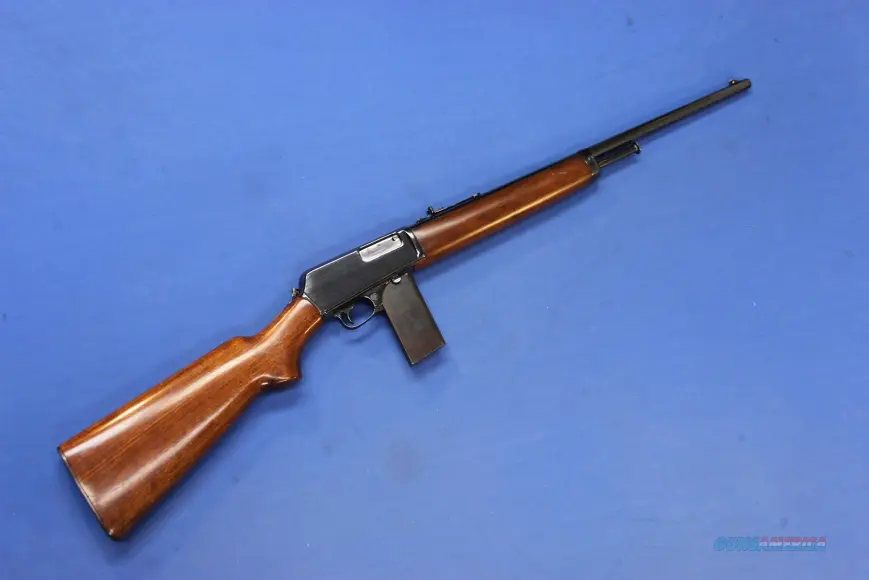 Has a weapon with the same rate of fire and magazine capacity as the modern AR-15 been widely available for civilian purchase in the U.S. since 1907?

Has a weapon with the same rate of fire and magazine capacity as the modern AR-15 been widely available for civilian purchase in the U.S. since 1907?

The Winchester 1907 were sold in the US with optional 10 round magazines prior to 1920 (at least 1916, possibly as early as when the gun was released). 30+ round magazines are available for AR-15s, even up to 100 round drums. When shooting a large number of rounds, e.g. more than 10 bullets, the difference in the rate of fire will be dominated by the time taken to exchange magazines; so the AR-15 will have a higher rate of fire overall. When shooting fewer bullets, the rate of fire will be comparable since both are semi-automatic weapons.

I believe that it is also worth pointing out that through most of the 20th century, it was legal to produce and distribute fully automatic weapons for the civilian market in the US.

The Winchester Model 1907 differs from an assault rifle in using a much heavier and more powerful round: the .351 Winchester Self-Loading bullet alone weighs 12 g, about the same as the weight of an entire 5.56×45mm NATO cartridge (11-13 g for the full cartridge, 4 g or less for the bullet). So within whatever your weight limit is for carrying around ammunition, you can carry about three times as many rounds for an AR15 as you can for the 1907 (which is the whole point of an assault rifle). Further, the AR15 will have a faster accurate fire rate due to much lower recoil and noise.

Even leaving fully automatic fire aside, the much lower ammo load you can carry and the slower accurate fire rate makes the 1907 in no way functionally equivalent to a modern assault rifle for military purposes.

But if your purpose is shooting up a school or shopping mall the case isn't so clear cut. A slightly slower fire rate isn't such a big problem when you have little need to suppress combatants firing back at you and lower accuracy at a given fire rate is also a lesser problem when the range at which you're firing is much lower than in typical military encounters. The much heavier .351 round will transfer significantly more kinetic energy to the target, but there is extensive argument over how much difference this really makes terms of stopping power and lethality, particularly with regard to the 5.56 round and it's associated AR15 rifle.

The exact goals of those shooting a large number of civilians are unclear to me (to put it mildly), so it's very hard to judge whether those wanting to do a mass shooting would consider the Winchester Model 1907 to be functionally equivalent to an AR15 for their purposes. There are quite a number of factors involved, and these may even include how people feel about the look of the weapon itself and how the shooter feels they will be perceived when using one weapon versus the other. It is indisputable that using an assault rifle will allow you to carry a lot more ammunition and, generally, give you a slightly higher fire rate; certainly it's conceivable that this will allow a shooter to more effectively achieve his goals.

Even assuming that the 1907 is functionally equivalent to an AR15 for a mass shooter's goals, the availability of the 1907 a century ago is not evidence that "[t]he semi-auto can be safely owned by civilians" now, as Leah Rosson claims, just that it was apparently safely owned then. And even that might be disputed (at least by the victims) if it were used in, for example, lynchings, which were considerably more common in the U.S. back then than they are now.

(In case people are wondering about my views, I consider collecting and/or shooting firearms to be a perfectly valid hobby that, like any other hobby, shouldn't be restricted unless that's necessary to achieve other important societal aims. (I don't find gun-related hobbies interesting to me personally, however, unless you consider first-person-shooter games to be "gun-related.") I also think that there may well be forms of restriction that could be significantly effective at reducing mass shootings yet not be any more restrictive than regulations we already have for things like automobiles. But I live far from the U.S. in a country nearly without mass shootings so the whole problem is more an intellectual curiosity to me than something that will affect me personally in any way.)

The Winchester Model 1907 did not have a "high capacity" magazine in the form available to consumers in 1907. The capacity was six.

The following is an ad in the January 1907 Hardware Dealers Magazine: 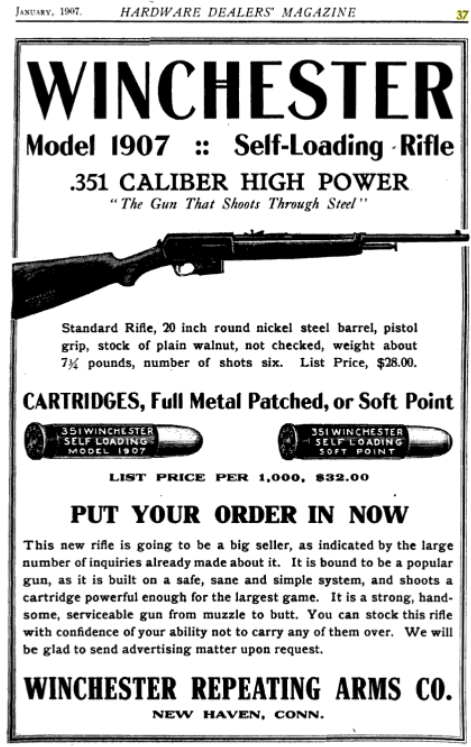 Then in 1910 a ten-round magazine was introduced, according to the September 1910 Amateur Sportsman at page 26: 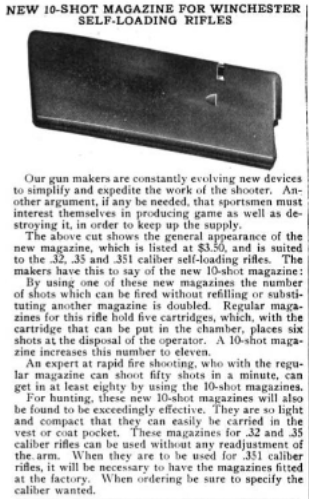 Not the answer you're looking for? Browse other questions tagged united-states history guns .

5
Has it only been about two hundred years since women gained access to literacy?
25
Has the Quran (the recitation) been preserved since Muhammad?
35
Has the Holocaust been exaggerated?
50
Has every U.S. presidential election been won by the campaign with the most money?
18
Has there been a dramatic expansion of the U.S. federal workforce in recent years?
2
Have 82 officers been charged for on-duty shootings since 2005?
9
Has the consumption of electricity, steel, copper, gold, water, paper, etc… decreased or flatlined in the U.S. since around 2009?
6
Has the US declared war since WWII?