Are guns the number one killer of children in the US?

Joe Biden, in his speech on June 2, said that guns are the number one killer of children, even more than car accidents. Is this claim true?

According to new data just released by the Centers for Disease Control and Prevention, guns are the No. 1 killer of children in the United States of America. The No. 1 killer. More than car accidents, more than cancer. Over the last two decades, more school-age children have died from guns than on-duty police officers and active-duty military combined.

Link of the speech.

According to NBC News:

(Note that this excludes children under age 1, who have a high death rate from birth defects, low birth weight and SIDS and few gun deaths. 19,582 children under 1 died in 2020. Including children under 1 would add 11 firearm deaths and 75 motor vehicle deaths CDC source.)

However, if young adults (18 and 19 year olds) are included, and again children under age 1 are excluded, then Biden's claim becomes accurate.

Considering all children, ages 0-17, the correct information from the CDC source above is as follows:
Deaths in 2020 due to:

A letter (dated mid April 2022) in the New England Journal of Medicine states that "The Centers for Disease Control and Prevention (CDC) recently released updated official mortality data..." and "...in 2020, firearm-related injuries became the leading cause of death in that age group" (1-19 years old).

First we need to define "children". There are a lot of possible demographic ranges we could use. A common age group is <1-14 for children, and if we include all adolescents, that's expanded to <1-19.

We'll used <1-19, meaning any infant, child, or adolescent under the age of 20; or, 1-19, meaning infants less than 1 are left out. This description is clear and concise, and frequently used in the literature as well as published by government departments. For instance, the CDC publishes for the age groups:

So we'd only need to sum the data from these groups to get a final answer for any sources of mortality. If we were to conduct O.R.

Luckily researchers at think tanks, universities, and non-profits compile data for us.

The next thing we'd need to discuss is how we'd group or cat the various types of disease, accidents, and intentional homicides. For instance, if we want to figure out the leading cause of death, we'd need to know if we should consider heart disease and cancer distinctly or under the same "poor chronic health" umbrella cluster. Also, to avoid conflating homicides with a gun and assault with some other deadly weapon or blunt/sharp object.

This has all been systematized by various bodies. For instance, the WHO use ICD-10 as a medical coding reference. The U.S. uses a slightly modified version ICD-10-CM. Here are the high level codes: 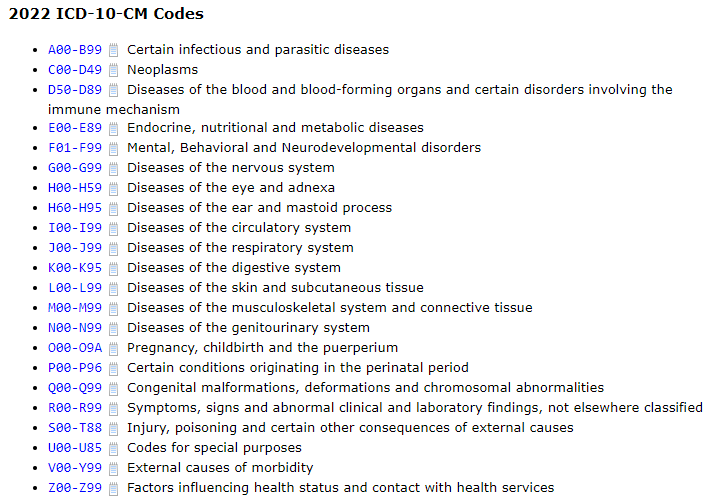 Any death by gun is part of V00-Y99 External causes of morbidity: 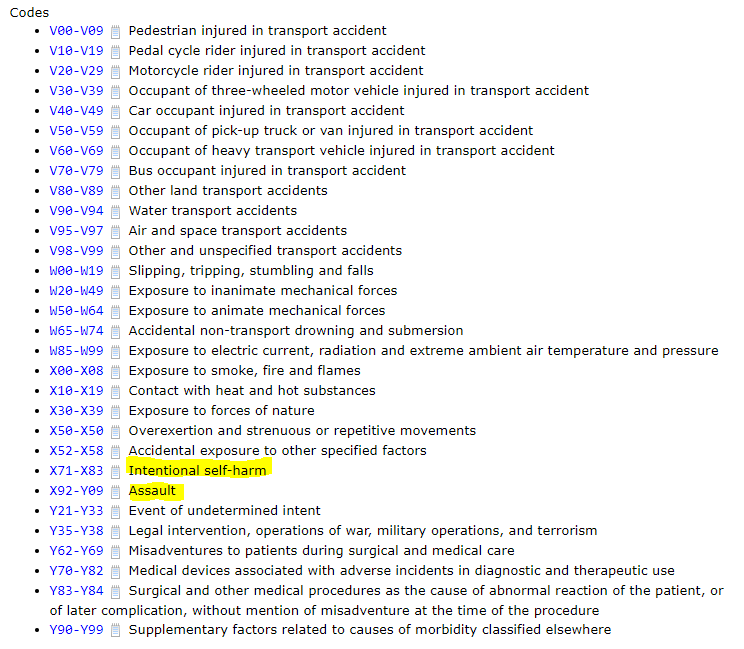 For simplicity, we could stick with ICD-10-CM, as it's the most widely-used, though obviously you can tell there's a taxonomic hierarchy here, and we have to go down several levels before we get to specific situations such as homicide with a gun, and even then those are subdivided into the different types of gun used in the assault, and so on. Cause of death can also get ruled as due to multiple codes in certain situations. It's complicated, and any assessment you read has made some assumptions and simplifications.

There are hundreds of different codes, so which ones should get classified together and which ones separate? as when researchers, statisticians, and media report the data. it's a tough question to answer when it comes to diseases and accidents, though the ICD makes it easier to classify it.

Around April-May, 2021, the CDC published data for leading causes of death for various age categories. The CDC used 10-CM.

Researchers at the University of Mich summarized them for "children and adolescents", in a paper submission called "Current Causes of Death in Children and Adolescents in the United States"[1], to the New England Journal of Med. So, this data is not including the infant group (<1). They found that the data says that fire-arm injury (homicide or self-inflicted) overtook motor vehicle — induced death for the first time in 2020 for age 1-19, based on how they categorized causes. They provide a graph: 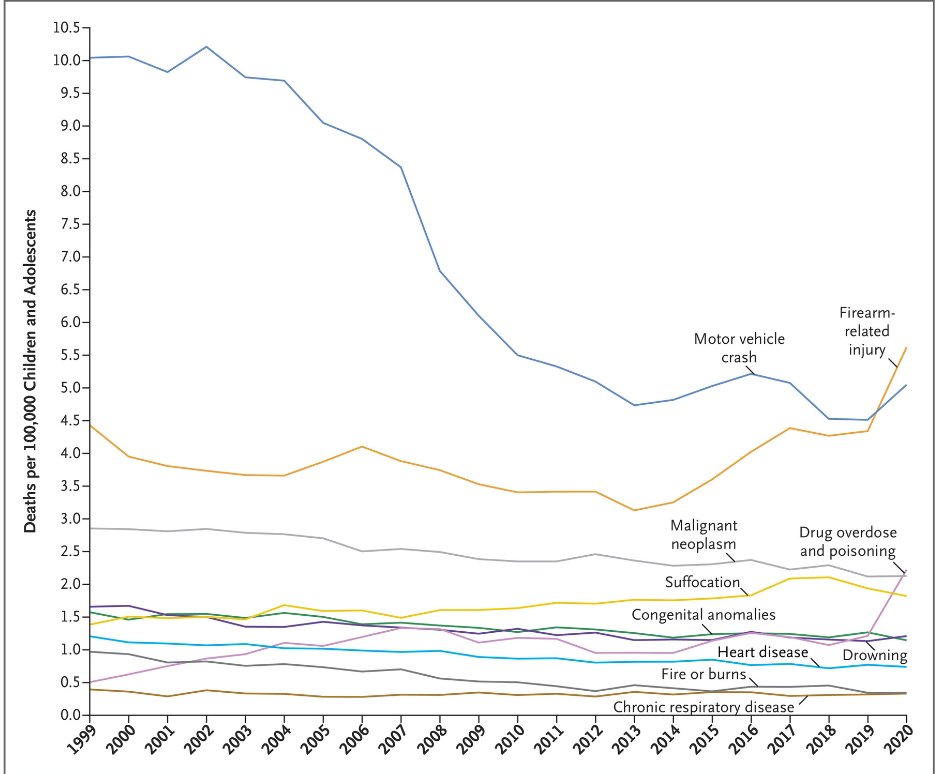 CDC has yet to publish data for 2021, so we have zero way of telling from the official source as to if the amount is still above vehicle induced through 2021.

There may be some conflation going on in the data being cited. Biden is also citing "new data" from the CDC, which suggests he's citing 2021 numbers, which aren't available on the CDC's website yet.

However, looking at 2020 data for the whole population, the statement certainly holds true.

CDC data for 2020 (You need to download the CSV in order to get this number, but I'm summing the total for all states in 2020) gives a total of 45,055 firearm-linked deaths in the United States in 2020. This includes homicides, suicides, and accidental discharges.

IIHS data for the same period gives a total deaths by automobile accident: 38,824.

So, for the population in 2020, firearms absolutely topped car crashes as a cause of death, by roughly +20%.

There's plenty of discussion in another answer about the sources of and information about juvenile deaths linked to either cause, but it's possible that there was conflation of the adult statistics.

The short answer here is "No". It is not the #1 killer of children.

The data they want to include conflates several categories with very different root causes and defines "child" differently for each category to suit a narrative. When using proper data and setting ages for "children" to be the same throughout, vehicle accidents, heart disease, and overdose (and more) top the charts.

You have to really twist the data to get what Biden said to be accurate.

Not the answer you're looking for? Browse other questions tagged united-states children guns .

17
Are there more guns in America than people?
10
Did the Aurora, Colorado movie theater killer select the only nearby theater where guns were prohibited?
4
Do children who attend pre-school get sick less often when they start kindergarten?
17
Are guns in the USA used 80 times more often to protect life than to take it?
9
Are one in five children in Europe victims of sexual violence?