Do 80 to 90 percent of lifelong smokers never develop lung cancer?

Joshua Hawkins of BGR.com has stated that 80 to 90 percent of lifelong smokers never develop lung cancer.

To quote the article:

However, based on the findings of this study, it could play a large part in why 80 to 90 percent of lifelong smokers never develop lung cancer.

There doesn't seem to be any source for the claim, although a study in Nature Genetics was linked in the article and that is behind a paywall.

As pointed out in the accepted answer to Skeptics.SE question, Does smoking cigarettes cause lung cancer?, smoking definitely causes cancer, but do 80 to 90 percent of lifelong smokers actually never develop lung cancer?

So, it is true that 80-90 percent of smokers never develop lung cancer.

At the same time, smoking massively increases the risk of lung cancer.

Citation in case the link to the study goes bad:

Note that the claim was specifically made about lung cancer. Smoking can cause many different types of cancer. Someone who dies from smoking-related throat, oral, stomach, etc. cancer wouldn't be included in those numbers, even if they would have developed lung cancer otherwise.

According to Cancer Council NSW, 1 in 8 cancer cases (all types) are caused by smoking, as are 1 in 5 cancer deaths. In Australia, 81% of all lung cancer cases are attributable to smoking. The CDC says that nearly 90% of lung cancer deaths are caused by smoking, and smoking increases your risk of lung cancer by 2500%. They also note that smoking can cause cancer "almost anywhere in your body". Smoking also makes it harder for your body to fight cancer and can lower your odds of surviving a non-smoking-related cancer.

So do 80%+ of smokers never develop (specifically) lung cancer? Perhaps, but that's a really limited and naïve way of looking at it. When nearly 1 in 5 deaths (all causes) in the US are caused by smoking and when smoking lowers your average lifespan by a decade, you've got a lot more to worry about than just lung cancer. The original article talks about smokers never developing lung cancer due to "DNA repair genes" that protect them. It doesn't mention, however, what percentage of those smokers actually have those genes. Based on all the statistics we have, it's more likely that they never developed lung cancer because smoking found some other way to kill them first.

It is an oversimplification to assume that even the majority of lifelong smokers 'must' develop lung cancer and die from it. There are other causes of death, and lung cancer is a leading cause among older smokers.

Epidemiological studies have estimated the risk of lung cancer with total lifetime smoking dose, duration, intensity and timing of cessation. It has been reported that 70% of smoking-related mortality occurs among those of advanced age, with 80–90% of life-long smokers never developing lung cancers.

They reference these sources for this:

The Crispo et al. paper then has this informative graphic, that at the same time shows that the simple equation 'smoking=certain lung cancer' is an untruthful and massive oversimplification, as well that lifelong non-smokers certainly develop not as much cancer compared to smokers (very similar graphics/results for Italy, Germany, Sweden): 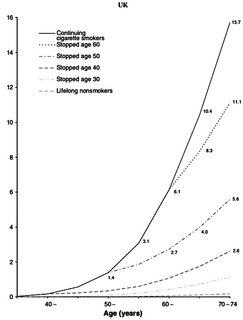 Effects of stopping smoking at various ages on the cumulative risk (%) of death from lung cancer up to age 75 at incidence rate for men in Europe.

The age-standardised mortality rate for lung cancer among Swedish males is substantially lower than in other European countries, at 22.6 per 100000 for the year 2000, while current mortality rates in the UK (48.6), Germany (46.2) and Italy (52.6) are more typical of other European countries (Ferlay et al, 2001). The difference between Sweden and the other countries cannot be explained by differences in consumption.

Lung cancer is believed to result from a series of inheritable changes in cells exposed to carcinogens.

These changes may occur sequentially or simultaneously, but they occur relatively slowly, and a substantial change in cell morphology, structure, and replicative machinery is necessary prior to transformation of a cell into a cancer. This is a process where the future rate of cancer incidence is built on a foundation of prior extensive molecular and genetic change that grows steadily with duration of smoking exposure. In contrast to coronary artery disease, where a single lesion in an otherwise normal heart can cause infarction and death, the long lag time required to produce carcinogenic transformation in the smoker precludes high rates of cancer early in life.

Not the answer you're looking for? Browse other questions tagged medical-science cancer smoking tobacco risk .

20
Does smoking cigarettes cause lung cancer?

14
Is nicotine a relatively safe substance?
17
Do organic cigarettes, such as American Spirit, contain less radioactive material than other brands?
20
Does smoking cigarettes cause lung cancer?
21
Does second hand smoke cause cancer?
13
Can smoking marijuana reduce the risk of cancer in cigarette smokers?
8
Does smoking cannabis kill 30,000 people per year?
13
Does fetal tobacco smoke exposure cause permanent harm?