Is America “the only nation where this [a mass shooting] regularly happens”?

The Onion, a satirical newspaper, re-uses a headline each time a mass shooting occurs in the US:

“No Way To Prevent This,” Says Only Nation Where This Regularly Happens

Most recently for the shooting in Uvalde, TX.

This tradition has its own Wikipedia article, and has been covered by numerous other media outlets.

Similar claims have been made widely; for a prominent example, Sky News reporter Mark Stone questioned Sen. Ted Cruz about it in a widely-reported incident. The Sky News report includes a statement that

Between 2009 and 2018 there were 288 school shootings in the US, the next highest number was in Mexico where there were eight.

But no sources are cited, and in any event “school shootings” are a subset of the “mass shootings” that the Onion headline refers to, and that Mark Stone seemed to be asking after.

The Washington Post report on the interview notes that

Cruz spokesman Steve Guest told The Washington Post that Stone’s line of questioning surrounding mass shootings in the United States was incorrect. Guest pointed to research from the Crime Research Prevention Center, a pro-firearms nonprofit founded by former Trump appointee John R. Lott Jr., that claims “the U.S. is well below the world average in terms of the number of mass public shootings.”

Infuriatingly, the Post doesn’t analyze either claim: they only report that Sky News says one thing, Ted Cruz’s office says another, and that’s it. The response is fairly buried, and the labeling of that response as coming from “a pro-firearms nonprofit founded by [a] former Trump appointee” certainly suggests that the Post sides with Sky News on this, but it’s not backed up. And while the conflict of interest gives a strong reason to be skeptical of the claim, it isn’t in itself a reason to assume that it is false—it’s a reason to dig deeper.

So I’m asking this site to help do that: Is America exceptional in how frequently it experiences mass shootings? Or is it “well below the world average in terms of mass public shootings”? If the difference comes down to definitions—as I suspect it does—I’d like to see analysis of those definitions: does one include incidents that don’t match what the public thinks of when they hear “mass shooting”? Or does the other exclude things that the public would include?

united-states guns violence
Share
Improve this question
asked May 27 at 16:09

Ted Cruz's spokesman cited a non-peer-reviewed analysis by John R. Lott. Lott says he is trying to debunk a study by the criminologist Adam Lankford, which the Washington Post's fact checker describes as follows:

Lankford conducted a statistical analysis of the total number of public mass shooters per country from 1966 to 2012 in 171 countries and controlled for the national population size. He said his data showed the United States had significantly more mass shooters, with 90 between 1966 and 2012, compared with 202 in the rest of the world.

Lankford did not include terrorist attacks in his definition of mass shootings, while Lott did.

When The Fact Checker spotted the Mumbai attack on Lott’s list, we asked Lott to remove terrorism cases from the totals for the four countries listed by Lankford — the Philippines, Russia, Yemen and France. Our hope was to provide as much an apples-to-apples comparison as possible.

Without terrorism cases, Lott’s count of shooters fell dramatically. In the Philippines, the number of shooters fell from 120 to 11, in Russia from 65 to 21 and in Yemen from 65 to 3. Only France did not have a significant decline, going from 5 to 4.

Furthermore, the Washington Post determined that most of the remaining incidents can also be described as militia or terrorist group activity, not lone gunmen. Lankford himself also made this point in his response to Lott.

However, a 2019 academic study found that various definitions of "mass shooting" can lead to vastly different outcomes, even simply using US data.

There is great potential for media reporting bias in mass shootings. People who claim that a mass shooting occurs almost every day of the year are correct only by the standards of Gun Violence Archive. Individuals against the movement toward more comprehensive gun legislation would be more inclined to use the Mother Jones mass shooting data to endorse the rarity of such events, and therefore the lack of urgency needed in mass shooting prevention. Neither of the groups would have to manipulate data to fit their message – they simply need to choose the database with the definition that best fits their agenda. In this way, the absence of a standard mass shooting definition undermines high-quality research and reporting in a field that has been highly politicized.

My conclusion from skimming these articles is as follows:

I'm not a criminologist and I welcome suggestions to modify this answer.

Snopes.com had an article on this subject in 2018, talking in particular about Lott's CRPC study mentioned in the OP. Besides talking about the issues in defining mass-shooting and the corresponding variability in the data already discussed in in this answer, one aspect they talk about is the use of mean vs median as measure of average. The mean is notoriously sensitive to statistical outliers, as a consequence small countries where one large mass shooting happened in the period looked at by Lott (like Norway) score very high on the "mean deaths from mass shootings per year per million people" metric. The median is a measure of average that is much less sensitive to statistical outliers.

So, we see that somewhat paradoxically based on this one dataset (and ignoring any potential issues with it) we can simultaneously conclude that:

Of course, by looking at the median the data does get skewed by the fine-graining of European countries which individually are small enough not to have any mass-shootings in most years. We can of course look at Europe as a whole to counter this effect (since Europe has a larger population than the US this should skew things in the other direction. The median number of deaths to mass-shootings in European countries per year according to Lott's data is 21, versus 18 in the US. Normalized by population this gives 0.028 vs 0.058 per million per year. So while, deaths to mass-shootings are more common in the US than in Europe, this data does imply that it is unfair to say that the US is the only place in the world where this regularly happens.

Many of these lists are not per capita. They ignore that USA has a population roughly half of all Europe (not to mention that it's considerably more diverse in most places).

For example, using the table from a recent The New York Times article, America's Gun Problem of mass shootings (public shootings in which four or more people were killed) from 1998-2019: 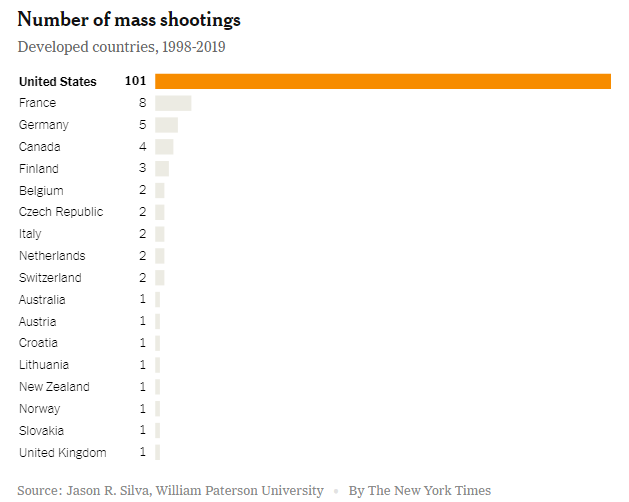 Notice that Finland (for example) had 3 where USA had 101. However, Finland population is 1/60th of USA. Adjusting per-capita and this statistic seems to show that mass shootings in Finland are relatively (based on population) 74% more frequent than in USA.

Czech Republic, New Zealand, and Slovakia all work out to around %70 of USA frequency. Some of these countries have less than 40 years of history, allowing for the possibility of further extrapolation.

Wikipedia considers that there were seven major news-worthy mass shootings in Europe last year. (In the same time-span, The Onion reported their headline 4 times.)

(Wikipedia considers that there were four major news-worthy mass shootings in Europe during 2020. The Onion only got to use their headline one time that year. The respective numbers for 2019 were four for Europe and 3 for USA, giving a three year total comparison of 15 (Europe) to 8 (USA). (Trying to draw some equation between the most newsworthy types of shootings.)

Using the frequency of The Onion headline occurrence itself as a guideline, then one would have to say that the USA does not actually experience regular mass shootings, but that they do occur, on average, a few times per year. Between 4 August 2019 and 23 March 2021 (more than 18-month period), the headline only found a single opportunity for invocation. (However, on 4 August 2019, it was used twice!) And before the Buffalo shooting for an entire year, from 26 May 2021 to 16 May 2022, there was no headline from The Onion in that time.)

Some other points for perspective:

A couple other links that examine these questions:

https://worldpopulationreview.com/country-rankings/mass-shootings-by-country (Using the map at the top, can be seen that Finland, Switzerland, Slovakia, Czech Republic, France, Norway, Serbia, Albania, Belgium, exceed USA in "per capita mass shooting deaths by 2022" - sources provided there. Of all the countries included on that map, I see only Italy and UK with numbers in that category that are an order of magnitude lower than USA.)

Not the answer you're looking for? Browse other questions tagged united-states guns violence .

102
Does America not lead the world in mass shootings?

10
Did the Aurora, Colorado movie theater killer select the only nearby theater where guns were prohibited?
33
In the USA, are there more African American men in prison than in college?
28
Is the US the only country where anyone can declare their own candidacy for president?
144
Are violent video games a better explanation of school shootings than access to guns?
94
On average in the US, is there a mass shooting 9 out of every 10 days?
102
Does America not lead the world in mass shootings?
6
Do illegal immigrants commit more murders than mass shooters?
37
Was the Highlands Ranch shooting the 115th mass shooting in the US in 2019
2
Have 82 officers been charged for on-duty shootings since 2005?