According to TheTimes.co.uk, "Russian ‘nuclear tsunami’ will wipe out Britain, Kremlin-backed media threatens"

In his Sunday evening primetime show, the Channel One anchor Dmitry Kiselyov said a strike by Russia’s Poseidon nuclear underwater drone could turn Britain into a wasteland by drowning the country in a 500-metre tidal wave of radioactive seawater.

Is there reasonable modelling, or other evidence, that shows Poseidon nuclear underwater drone could create a 500-meter tidal wave?

military russia nuclear-weapons
Share
Improve this question
edited May 3 at 15:48

No multi-megaton nuclear warhead ever has been exploded underwater, so the best we can hope for in the way of sources is "what is the research on this".

During the Cold War, underwater explosions were thought to operate under the same principles as tsunamis, potentially increasing dramatically in height as they move over shallow water, and flooding the land beyond the shoreline.[7] Later research and analysis suggested that water waves generated by explosions were different from those generated by tsunamis and landslides. Méhauté et al. conclude in their 1996 overview Water Waves Generated by Underwater Explosion that the surface waves from even a very large offshore undersea explosion would expend most of their energy on the continental shelf, resulting in coastal flooding no worse than that from a bad storm.[2]

Well, nobody has tested really, really big nuclear bombs underwater. But we do have some underwater tests we can look at.

In 1946, the US tested a 21 kt bomb underwater in Operation Crossroads. You can watch the unclassified detonation. Another source describes the detonation as follows:

When Helen of Bikini exploded, it created a giant, underwater bubble of hot gas. In seconds, the bubble hit the seafloor, where it blasted a crater 30 feet deep and at least 1,800 feet wide. At the same time, the surface of lagoon erupted into a giant column of water, two million tons of it, which shot more than 5,000 feet into the air, over an area a half-mile wide. In the seconds after the blast hit the surface, a cloud of radioactive condensation unfurled across the lagoon, hiding the column of water shooting upwards. At the top, a mushroom cloud of gas bloomed against the sky.

Several other tests have been conducted, including deep water detonations in Operation Hardtack.

What's notable is that there's not really a big tsunami - most of the water just got vaporized, it didn't get displaced. This is different from an earthquake, which does not vaporize water at all. It seems likely (although not certain without more exact details about the Russian device and comparable testing) that the main risk would be radioactive contamination, which is apparently quite extensive from underwater detonations.

Let's suppose the bomb can actually produce a 500m wave near the point of detonation--what happens? The circumference of a circle is linear to it's radius--double the distance and you double the total area and thus halve the height.

Thus, while it can wreck a coastal city it's not going to sweep across a whole country unless you're talking something like Singapore or Hong Kong.

Most tsunamis are created by seabed displacement of large areas. Let's say a tectonic plate snaps and part of it is raised higher, the other part goes below. So a very large amount of water changes its elevation and naturally tries to return to the original state by flowing from raised areas or flowing into lowered areas. This volume of moving water cannot stop on a dime and the created wave keeps flowing very large distances. To reproduce this scenario a nuclear explosion must happen deep under the surface of the sea bed. I doubt it is practical to drill deep enough for the nuclear device in a war situation. Most people think that the scenario threatened by Russia is more like throwing a rock in the water and creating the wave. It is very difficult to answer whether it is a threat to UK. For example if this happen in a shallow place there could be no enough water to create large tsunami. This would be more like underwater volcanoes, which we know do not create tsunamis.

This isn't an answer, but gives some visual context of the depth of the sea floor around Britain 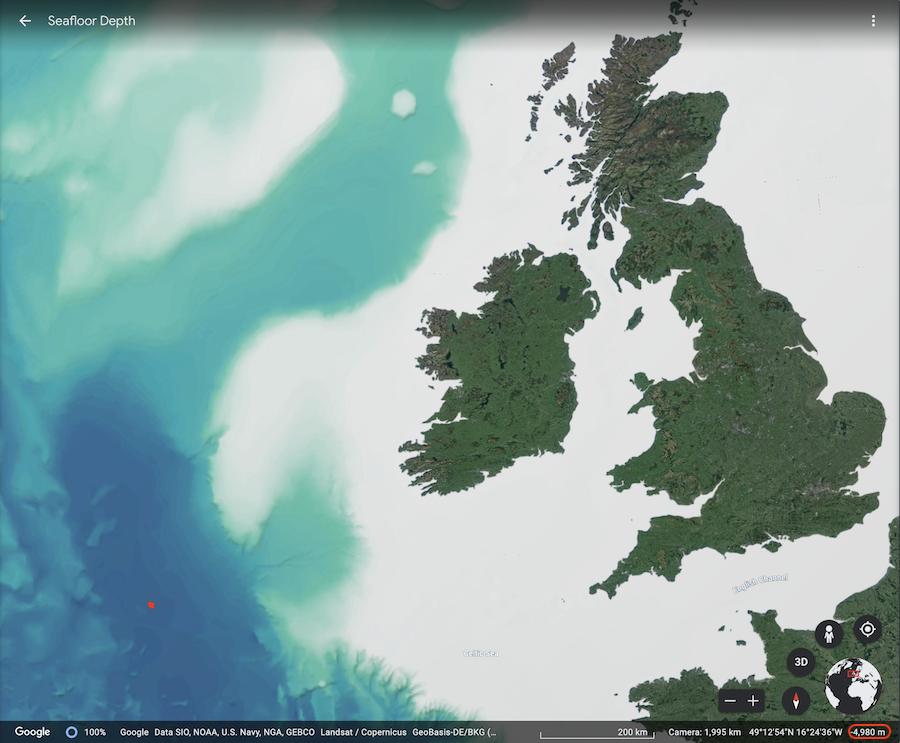 Tsunamis can grow a lot when they hit shallow water around land (which in Britain's case ranges from a few hundred meeters to just ~10 meters deep), but it's not clear if that would happen here, since it might be more of an underwater cliff than an underwater ramp.

Not the answer you're looking for? Browse other questions tagged military russia nuclear-weapons .