Is it theoretically possible to sail from north east Russia to Pakistan in a straight line?

I found this map from this substack, World in motion:

Rohan Chabukswar and Kushal Mukherjee, a pair of researchers at the United Technologies Research Center in Cork, plotted the route in 2018 in response to a question posed by Live Science. They worked out that, if you set off from the coast of Pakistan, it would be possible to sail for nearly 20,000 miles – between Africa and Madagascar, narrowly missing the coast of South America – before hitting land again in the far north east of Russia.

And although it looks like a curve on a two-dimensional map, your theoretical boat would actually be sailing in a completely straight line. 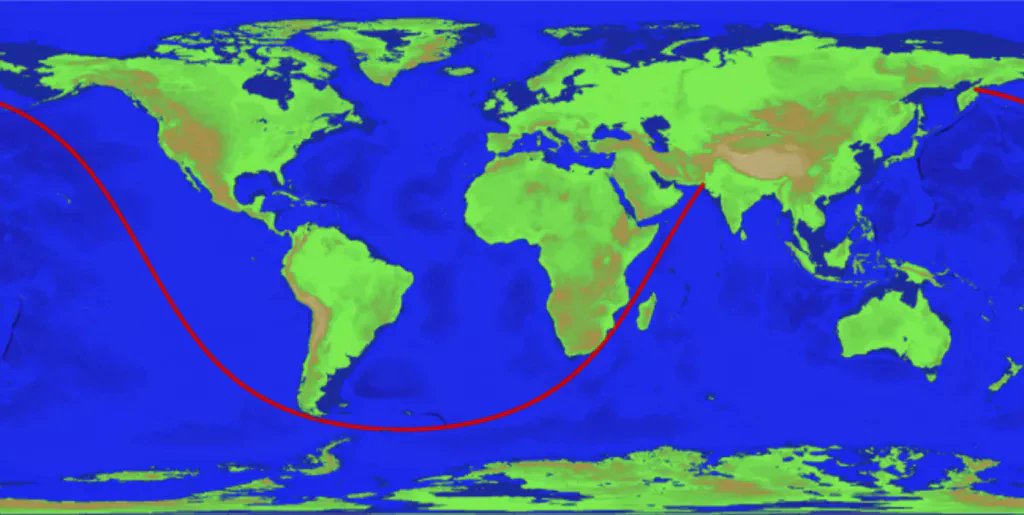 It claims you can sail from north east Russia to Pakistan in a straight line. How is this true?

An issue of Projection of a 3D globe on a 2D surface. It becomes immediately obvious once you look at an actual 3D globe that the line is, indeed, straight. 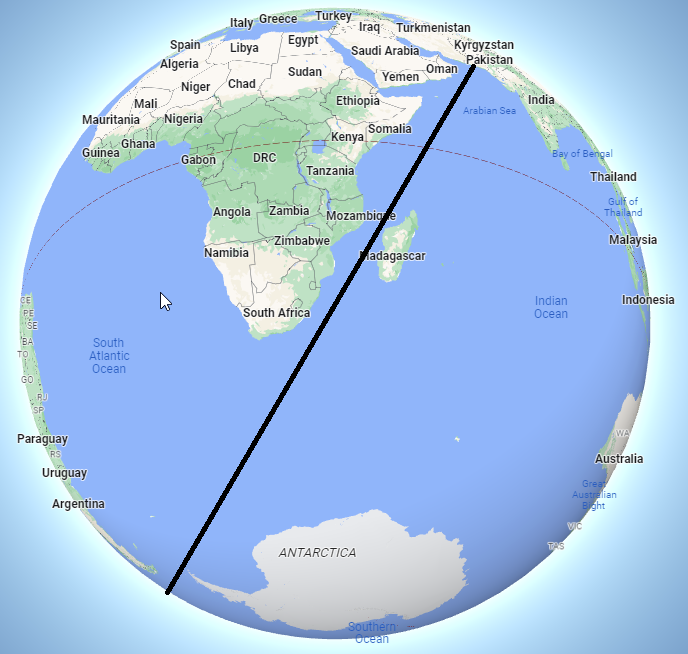 The other side is just lots of Pacific Ocean.

If you want the 3D view animated, this YT video shows that.

What they are saying is that, if you leave Kamchatka in the correct direction, you can sail to Pakistan without changing the rudder setting. It does not mean you will always follow the same compass heading, you emphatically will not.

The reason is that a "straight" line on a sphere is what's called a "great circle". If you cut a sphere with a plane that goes through the centre of the sphere, the line it traces on the surface is a great circle.

A great circle is considered a straight line, because it is the shortest distance between 2 points, as long as you can't leave the surface of the sphere. All great circles on a sphere are the same size. Meridians are great circles, but lines of latitude (except the equator) are not.

Airplanes flying long distance follow great circles, to minimise fuel use. A flight from Seattle to London will pass over Greenland; planes going to Sydney from Santiago sometimes (depending on winds) fly far enough south to make Antarctica visible. They fly a "straight" line around the earth. For more details, see Flight Paths and Great Circles – Why Are Great Circles the Shortest Flight Path?.

You may have noticed that the path of satellites, projected on the surface, follows a similar curve. See, for example, the path of the International Space Station. While the path of the ISS is not circular, compared to the radius of the earth, the difference is minimal. The ISS obviously does not ever deviate from a straight line around the earth, yet, around it goes. With the ISS, the curve shifts from one orbit to the next, because the earth rotates underneath. If you extend the curve on your map, you'll notice it gets you back to Kamchatka.

The real problem is that a sphere cannot be accurately mapped on a flat map. There are always distortions. It's those distortions that convert a straight line into what looks like a curve. Wikipedia has a good article on the various types of map projections and their pros and cons.

For example, when I was little, my dad used to enjoy quizzing me about geography. Which is farther north, he’d ask, Rome or New York City? Most people would guess New York, but surprisingly they’re at almost the same latitude, with Rome being just a bit farther north. On the usual map of the world (the misleading Mercator projection, where Greenland appears gigantic) it looks like you could go straight from New York to Rome by heading due east.

Yet airline pilots never take that route. They always fly northeast out of New York, hugging the coast of Canada. I used to think they were staying close to land for safety’s sake, but that’s not the reason. It’s simply the most direct route, if you take the earth’s curvature into account. The shortest path from New York to Rome goes past Nova Scotia and Newfoundland, then heads out over the Atlantic, and finally veers south of Ireland and across France for arrival in sunny Italy.

This kind of path on the globe is called an arc of a “great circle.” Like straight lines in ordinary space, great circles on a sphere contain the shortest paths between any two points. They’re called “great” because they’re the largest circles you can have on a sphere. Conspicuous examples include the equator and the longitudinal circles that pass through the north and south poles.

Another property that lines and great circles share is that they’re the straightest paths. That might sound strange — all paths on a globe are curved, so what do we mean by “straightest”? Well, some paths are more curved than others. The great circles don’t do any additional curving, above and beyond what they’re forced to do by following the surface of the sphere.

Here’s a way to visualize this. Imagine you’re riding a tiny bicycle on the surface of a globe, and you’re trying to stay on a certain path. If it’s part of a great circle, you won’t ever need to steer. That’s the sense in which great circles are “straight.” In contrast, if you try to ride along a line of latitude near one of the poles, you’ll have to keep turning the handlebars.