Bill McKibben writes for The New Yorker in a March 18, 2022 article titled "In a World on Fire, Stop Burning Things" (emphasis added):

Our species depends on combustion; it made us human, and then it made us modern. But, having spent millennia learning to harness fire, and three centuries using it to fashion the world we know, we must spend the next years systematically eradicating it. Because, taken together, those blazes—the fires beneath the hoods of 1.4 billion vehicles and in the homes of billions more people, in giant power plants, and in the boilers of factories and the engines of airplanes [and] ships—are more destructive than the most powerful volcanoes, dwarfing Krakatoa and Tambora. The smoke and smog from those engines and appliances directly kill nine million people a year, more deaths than those caused by war and terrorism, not to mention malaria and tuberculosis, together. (In 2020, fossil-fuel pollution killed three times as many people as COVID-19 did.)

In 2020, did three times as many people die from fossil-fuel pollution as from COVID-19?

The claim's specificity is probably not rock-solid, but the idea that fossil fuels kill huge numbers of people annually is sound.

I'm assuming McKibben was relying on this study from Harvard University published in Environmental Research, which provides a point-estimate of deaths from sub-2.5 micron particulate matter emissions of 8.7M deaths per year. Rounding that off produces a 9M/year estimate.

It's important to note that the study itself identifies some pretty dramatically wide 95% confidence intervals (including negative values - which would represent air pollution actually prolonging people's lives by preventing their death... lol). The real number could be 0 or as high as 14M deaths per year.

That study does a good job at improving on the existing methodology for modeling - and typing - air pollution. In particular, it focused on filling in gaps left by studies that generally use satellite data because satellites can't tell if a given bit of PM2.5 came from fossil fuels, agriculture, or folks cooking over campfires. Those corrections produced a big jump in the numbers of deaths attributable to fossil fuels, in no small part because it's able to examine the intersection between burning of large amounts of fossil fuels and high population densities associated with urban centers - particularly in China. (There's a whole section in the study devoted to the work China has been doing to get it's air pollution under control, and incorporating that tightens the 95% CI considerably).

There's also some amount of rhetorical license due to McKibben since fossil fuels are a century+ old energy paradigm, and COVID-19 is both recent, and being swiftly studied and adapted to. In a given year, have fossil fuels killed exactly thrice as many people as COVID-19? Estimates of that specificity aren't really possible.

But in the long run, fossil fuels' body count makes a mockery of COVID-19, for sure.

It's also important to note that this is ONLY considering deaths from PM2.5 exposures. Fossil fuels kill in a dizzying variety of ways from mining accidents (coal mining has gotten a lot better since its inception, but it's still a dangerous business, as is oil drilling), climate impacts, political factors (it's not entirely unreasonable to lay casualties of wars fought over oil fields at the feet of fossil fuels, etc).

Most of these numbers are unknown, many unknowable, and apportionment and attribution is rife with philosophical issues.

But we know enough to know that fossil fuels are bad.

I’ll address the “nine million people a year” estimate. The World Health Organization (WHO) estimates that 7 million people a year “die prematurely” from air pollution. They break this down into household pollution, which according to their estimates causes 3.8 million premature deaths, and ambient (outdoor) air pollution, which causes 4.2 million premature deaths.* You can find detailed explanations of the nature of these sources of pollution and references to further resources on the above-linked web pages.

* Since 3.8+4.2=8 and yet the WHO cites 7 million as the estimate for the total air pollution deaths, presumably that means that 1 million of the premature deaths are classified as being brought about by both indoor and outdoor air pollution.

Now, 7 million is not that far from 9 million, so in that sense McKibben’s estimate appears plausible. However, I see a couple of issues with his way of presenting things:

Summary: the WHO is not necessarily the only or most authoritative source of data on this topic, so McKibben might be relying on another source that’s equally credible. However, at least when cross checking his claims against the WHO’s data, they seem a tad hyperbolic to me.

In 2020, fossil-fuel pollution killed three times as many people as COVID-19 did.

The Dan Romik's answer does a good job of critiquing the 9 million people per year, but the other side of the equation is also uncertain, as in did only 3 million people die of COVID-19 in 2020? Studies have tried to estimate the true death toll of the COVID-19 pandemic and they come up with an answer that is many times higher than the official one. Nature discusses two models that attempt to use excess mortality to estimate the true death toll, and the answers are about three times greater than the reported deaths: 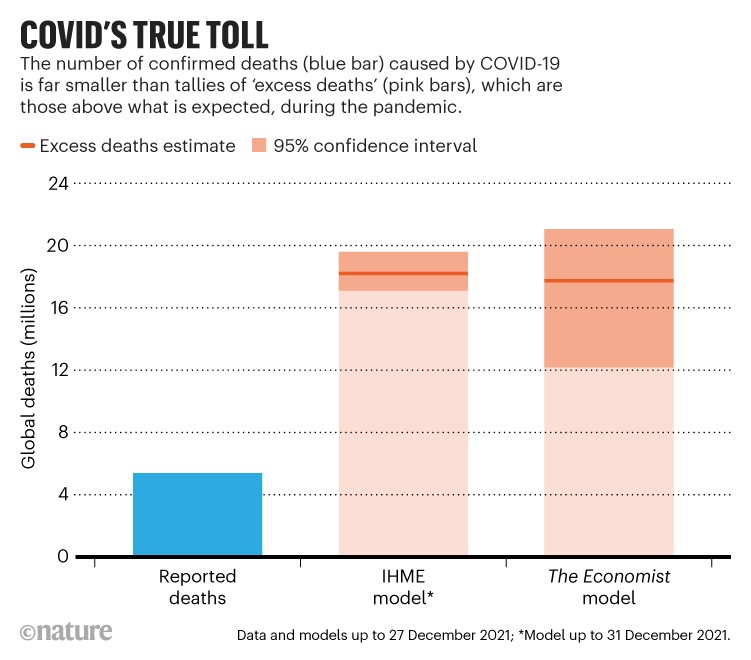 Another challenge to the official numbers has recently been published, though at time of writing this is currently only available as a non-peer reviewed pre-print, is an analysis of nasopharyngeal swab taken from 1,118 deceased individuals at a single hospital in Lusaka, Zambia. The detected COVID-19 was detected among 32.0% of those samples. During times of peak transmission COVID-19 was detected in ∼90% of all deaths. This indicates that only about 10% of COVID-19+ deaths were identified in life, indicating an under-counting of approximately an order of magnitude. This is consistent with a surprisingly low incidence of reported COVID across much of Africa and may indicate the true death toll is many times that reported.

While there is plenty of uncertainty in both these analyses. In the former there are semantic questions about how deaths indirectly related to covid are counted in this context. In the latter is very hard to generalise to wider situations than this hospital and would be expected to be very different in areas with more testing capacity, which probably means most of the world outside of Africa. However considering both these areas of uncertainty assuming that only 3 million people died from COVID-19 in 2020 is not well supported by the evidence.

Not the answer you're looking for? Browse other questions tagged covid-19 pollution fossil-fuel .

3
Did Willie Soon fail to disclose a conflict of interest with the fossil fuel lobby?
2
Have few, if any, studies on the health effects of particulate air pollution measured the actual exposure to particulates?
47
As of May 2020, are there twice as many deaths from Covid-19 in New York City as there are on a usual day from all other causes combined?
45
Are unusually many people dying after being vaccinated for COVID-19?
38
Did the French government print posters explaining COVID-19 vaccination passport policy already in January 2020?
61
Is the COVID-19 vaccine 50 times more likely to kill young people than COVID-19 itself?
3
Are unvaccinated people 10 times more likely to get COVID-19 than vaccinated people?
8
Did COVID-19 kill ~5 times more people per capita in Jun-Aug 2021 in US counties that >70% voted for Trump than in those which voted <26-32% Trump?