Does Ukraine have biological weapons facilities?

The website for the US Embassy in Ukraine has a page for a "Biological Threat Reduction Program", which explains that this program is to counter bio weapon threats. I have yet to see evidence of bio-labs containing biological weapons or having the purpose of creating biological weapons.

Igor Kirillov, the chief of the Russian Armed Forces' radiation, chemical, and biological defence, told reporters that the laboratories were reportedly involved in biological weapons production.

"The Russian Defense Ministry has repeatedly drawn attention to the military biological programs that are being implemented by the Pentagon in post-Soviet countries, including on the territory of Ukraine, where a network of more than 30 biological laboratories has been formed, which can be divided into research and sanitary-epidemiological ones," Kirillov said.

On Monday, Lieutenant General Igor Kirillov claimed that the documents seen by the Russian military suggest that some of these laboratories worked with anthrax and the plague among other infections. Kirillov also alleged that “the only reason” why Kiev had reportedly moved to destroy the materials was out of concern that Russian experts “will highly likely prove Ukraine and the US have been in violation of the Biological Weapons Convention” once they study the samples.

So does Ukraine have biological weapons facilities?

I think it's worth looking at some of the specific evidence put forward by Russian state-sponsored media.

This is a document that is purported to be from the Ukrainian government, instructing a biological lab to destroy potentially harmful biological agents due to the current crisis (there is a partial translation in that twitter thread). I have no reason to think this is not authentic, so I'm going to assume it's a real document that's approximately correctly translated (I don't speak Russian or Ukrainian). 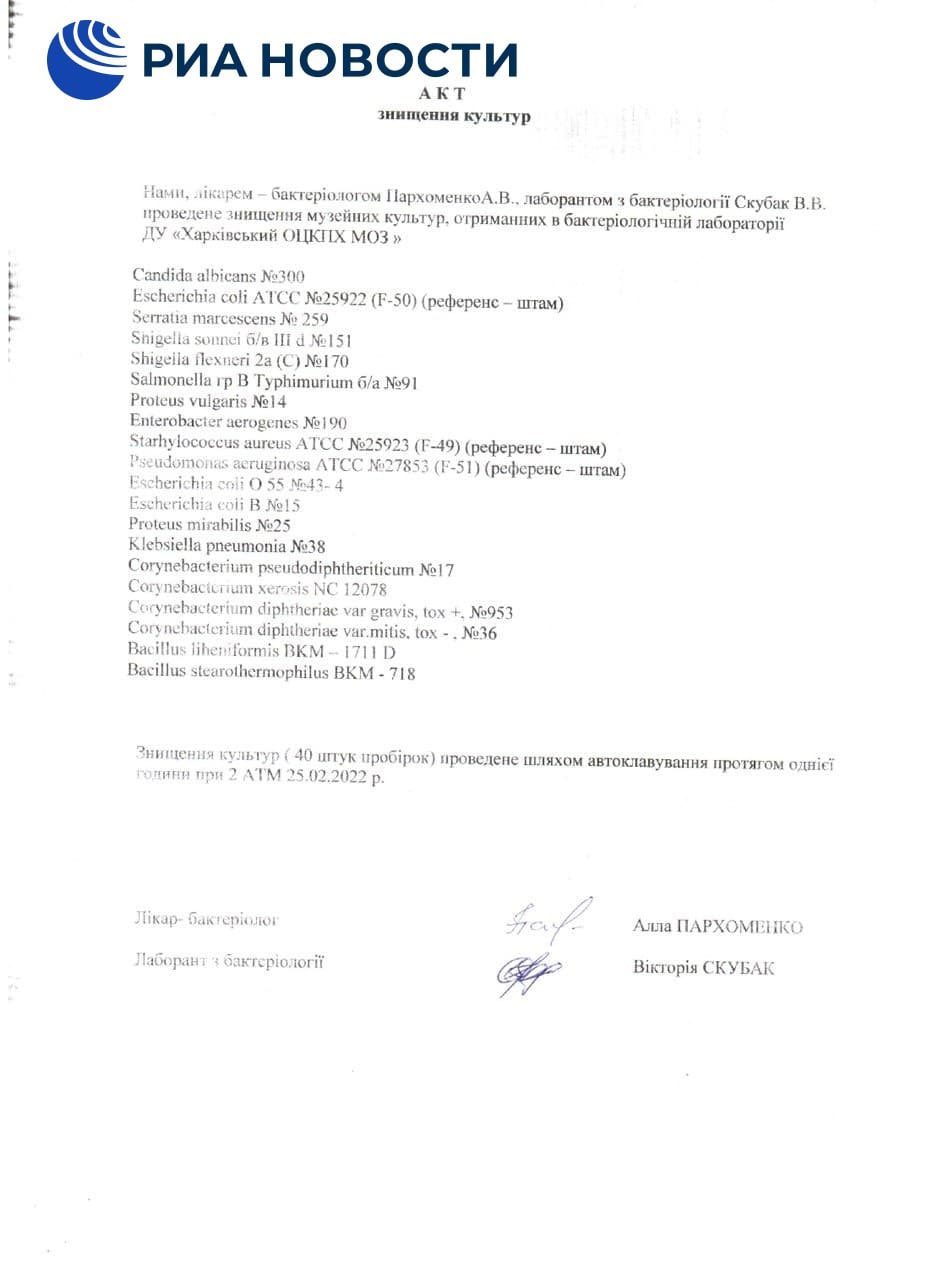 The end of this document lists the biohazards in question in latin script, which I'm going to reproduce here:

Absolutely none of these are biological warfare agents. They are, for the most part, routinely used in general microbiology labs. Most are available without restriction from the American Type Culture Collection, which holds baseline microoganisms for researchers. Anthrax and the Plague are not on this list.

I'm not sure how it's possible to prove a negative of this kind, but

Izumi Nakamitsu, the UN High Representative for Disarmament Affairs, told the 15-member council that the UN is “not aware of any biological weapons programmes” in Ukraine.

The context was that

Russia called the meeting on Friday to discuss its unproven allegations that Ukraine is operating biological weapons laboratories with support from the United States.

As for the claim in SSight3's answer that Ukraine labs being able to handle anthrax is suspicious: Ukraine, like Russia has seen natural outbreaks (and even the UK has had cases). There's nothing suspicious about labs in these countries handling anthrax in the context of such epidemiological research Russia conducts it and so does Ukraine.

But only one of these countries has invaded the other. And claimed the invaded country was also having a secret nuke program. Again the UN said it knows nothing about that either. So, it must be a US-funded conspiracy, because Tucker Carlson says so.

By the way, Russia's latest in this storm of Russian accusations is that something-something coronavirus samples Ukraine-Russia migratory bird experiments etc. And they promised to release the documents soon. Not even Tucker can keep up. (Did I mention Russia has prohibited its press from calling the war a war, on pain of 10-15 years of imprisonment?)

If anyone is curious why Ukraine has an "anti-plague" institute:

the Odessa Port AP [anti-plague] Laboratory was founded within the Odessa harbor by epidemiologist M.A. Minchin in 1937. This was apparently done after the League of Nations requested the Soviet government to establish a plague laboratory because of fears of plague being imported into Europe through the Odessa harbor. This laboratory was renamed the Odessa AP Station in 1970 and, in 1997, after Ukraine’s independence, was reorganized into the State AP Station of Ukraine. The latest AP system-related development, in 1999, was that the I.I. Mechnikov Odessa Scientific and Research Institute of Viral Diseases and Epidemiology and the State AP Station of Ukraine were merged and the resulting institution was named the I.I. Mechnikov Ukrainian Scientific-Research Anti-plague Institute (hereafter Mechnikov AP Institute).

Going back to Soviet times, lacking natural plague foci, plague bacteria can be found only at Ukrainian seaports in infected rodents or their ectoparasites. Therefore the most important, and dangerous, task for the Odessa AP Station throughout the Soviet era was to catch rats and mice on ships and around the harbor and culture them and their ectoparasites for pathogens. In addition to plague bacteria, over the years the station has recovered bacteria from rodents that cause cholera, tularemia, leptospirosis, and brucellosis. Beyond Odessa, the station was responsible for monitoring the situation related to plague, cholera, anthrax, tularemia, and leptospirosis in the western and northwestern parts of the USSR, although its activities were mainly undertaken in Ukraine and Moldova. Its major responsibilities were to eliminate these diseases as much as possible and to train local health officials on how to handle and test dangerous pathogens.

In recent years, it developed a particular interest in arboviruses related to birds—such as CCHF virus and West Nile fever virus—because southern Ukraine is a major transit point for birds migrating from Africa to Europe and some are carriers of these viruses. However, until 2004, this department had never studied the CCHF virus directly.

(By the way, this wasn't just some fancy that struck some bored researcher. Around that time CCHF started to be reported in Eurasia.)

And this is where Ukraine's first BSL-3 lab was constructed, around 2009-2010, by a US company (which happily advertises this on its website).

There is another AP institute in Simferopol, in Russian hands since 2014.

The US sponsored a similar BLS-3 facility in Tbilisi, Georgia. As for Russian media stories, which started to circulate almost immediately, these generally leave out that not having such BLS-3 facilities is actually a problem given the mission of these institutes:

As part of our tour, we were shown what is regarded as the lab’s most sensitive area, its store of “Especially Dangerous Pathogens” (EDPs), a high-security repository of lethal bacteria and viruses collected by scientists. It is known as the “pathogen museum.” Even though many of these EDP samples were originally procured in Soviet times, some Russian media reports have speculated that this store is the basis of a bio-weapons arsenal. Its work was so tightly under wraps, that residents had dubbed it “a secret Pentagon station.” — Russian TV reporter.

Many of these samples — now inside the lab’s “pathogen museum” — were previously kept in an old, Soviet-era research institute in the middle of Tbilisi, posing a significant potential risk to the public. Far safer, say Lugar Lab staff, to store these and other pathogen samples in a purpose-built facility on the outskirts of the city. But Russian media reports alleging that the U.S.-funded lab is creating biological weapons don’t mention this back story.

Russia, one the other hand, is priding itself on building such labs in numbers; as TASS headlines: "Russia to set up 15 highest biosafety level labs by 2024". (I'm guessing they mean BSL-4, but their reporting isn't clear.) But this isn't any kind of problem, because they never poisoned any regime opponents, inside and outside their country (according to themselves).

Not the answer you're looking for? Browse other questions tagged weapons ukraine .

7
Was the MH17 video taken in Ukraine-held territory?
15
Have US Navy SEALs used tomahawk axes as weapons?
16
Is the West supporting neo-Nazis in Ukraine?
15
Do inaudible sonic weapons exist?
24
Do the Crimean people prefer to be with Russia than with Ukraine?