Did the FBI write a letter to Martin Luther King Jr, blackmailing him to take his own life?

This tweet by WikiLeaks today claims the letter below was sent 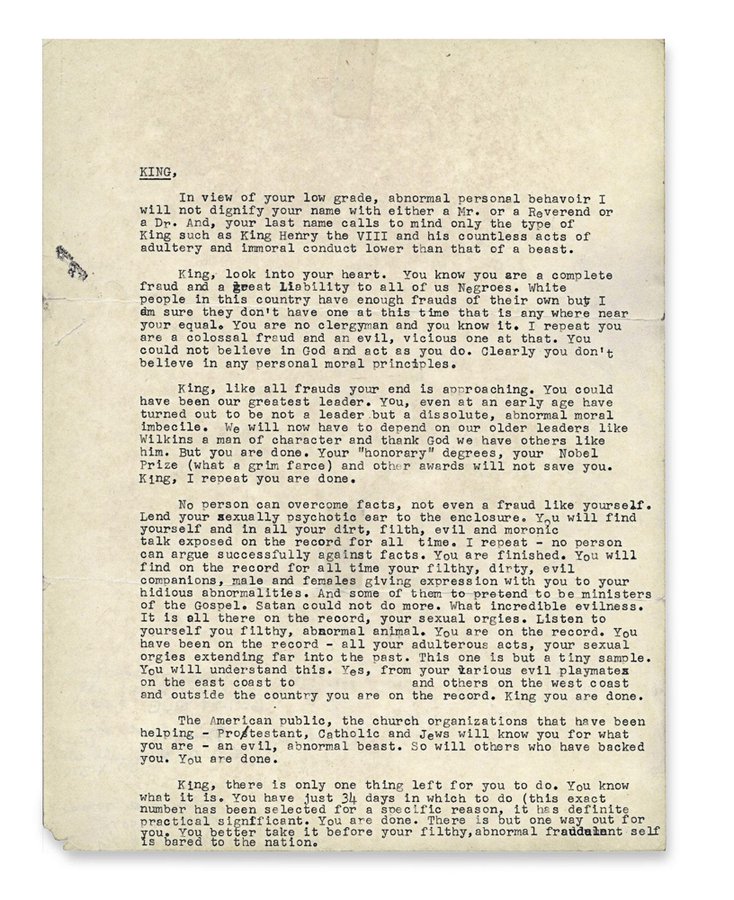 I’m wondering if anyone can find other sources related to this or confirm or disprove the claim in some way?

The tweet is phrased in a way that makes it sound (initially) like the FBI wrote this and sent it to MLK, even though it could easily be something in their possession that never was sent. Maybe the FBI didn’t write it at all (“us negroes” probably wasn’t written by the FBI)

The incident is indeed well-documented by numerous reliable sources. Among them:

the FBI penned and sent King an anonymous letter, along with some of their tapes, suggesting that he should kill himself.

The letter runs to more than 500 words, and claims to be from an African-American who supported the civil rights movement. In fact, it was written by the FBI.

Pollard said, referencing a letter the bureau sent to King’s home which insinuated that the only way he could avoid public shame was if he killed himself.

The New York Times goes into a bit of detail:

[T]he so-called “suicide letter” has occupied a unique place in the history of American intelligence — the most notorious and embarrassing example of Hoover’s F.B.I. run amok. [...]

At this point Hoover decided to escalate his campaign. On Nov. 18, 1964 — 50 years ago this week — Hoover denounced King at a Washington news conference, labeling him the “the most notorious liar in the country.” A few days later, one of Hoover’s deputies, William Sullivan, apparently took it upon himself to write the anonymous letter and sent an agent to Miami, to mail the package to Atlanta.

For additional information, watch this C-SPAN clip, and read the Wikipedia page (largely sourced to Richard Gid Powers) on the letter and Church Committee.

I found no source doubting that the FBI wrote the letter, and it's one of the more benign tactics of the FBI's COINTELPRO program. In 1975, Nicholas M. Horrock of the New York Times writes:

They produced documents disclosing that the bureau had used forged letter's [sic] in an attempt to cause marital trouble among leaders of black militant groups and the Ku Klux Klan.

The F.B.I. field office in St. Louis, for example, sent the husband of a white woman involved in a black activist group a letter alleging that his wife was having sexual relations with black men.

Forging letters (including alleging sexual improprieties) was a well-established practice by the FBI, as established by Church Committee.

Not the answer you're looking for? Browse other questions tagged martin-luther-king .