Is it true that there is not enough electricity to power all vehicles in the United States if they were electric?

According to Scotty Kilmer, in his video, "The Truth About My Worsening Condition":

There is not enough electricity [currently] to charge the batteries of cars like Tesla that have lithium ion or lithium iron phosphate batteries. There would have to be something like six times as much electricity [generation as there currently is] being generated in the United States to get [electric] cars for everybody who is driving [fossil-fuel burning] cars.

For the purpose of eliminating claims that aren't made, I've added my own interpretation in brackets.

tl;dr: The claim is false. The claim is that there would need to be six times as much electric generation, but if all cars in 2019 had been electric, only 1.43 times (43%) more generation would have been needed to power them all. This was most likely within the capacity of the existing power system.

The claim is about the present day, but for this analysis I'm going to use 2019 data, the last full year before the pandemic started.

Less than 2 million of these were EVs (source), which I'll treat as a rounding error. The table down below breaks them down by vehicle type. Buses and motorcycles are listed separately for some reason, but I lumped them together as "other" for completeness.

Per the Electric Vehicle Database, the average passenger EV has a battery capacity of 59.3 kWh and a range of 196 miles (315 km).

Capacity estimates are harder to come by for heavy duty vehicles, as there aren't many of these on the road yet. However this recent Autoweek article looking at freight trucks mentions a range of capacities from 220 to 475 kWh, with a corresponding range of ranges from 125 to 250 miles. Using the data from the FHA, the average heavy duty vehicle would need to travel less than 100 miles per weekday:

...so I'll use the low end of the battery capacity range.

How much energy would be needed?

Combining all the data, and calculating the total energy that would have been needed in 2019 to power these EVs:

The energy is calculated as follows:

Assuming losses of 5% in transmission and distrubtion, the actual amount of generation required would have been 1,827,075 GWh.

Total electric generation in the U.S. in 2019 was 4,266,488 GWh per the U.S. Energy Information Administration, meaning that a total of 6,093,563 GWh would have been needed to meet the EV demand in addition to the existing demand.

Going a bit beyond the scope of the question...

Was that much energy feasible?

The generation at any given time is matched to the load, so the real question is whether the higher load could have been met, which is a function of total generator capacity.

Ignoring intermittent resources such as solar, wind, and pumped hydro, the total dispatchable capacity in 2019 was 917 GW, with a theoretical ability to generate a total of 8,033,064 GWh (assuming 24x7 operation). This is a conservative estimate using the net summer capacity, which is lower as thermal plants (coal, natural gas, and nuclear) are less efficient when ambient temperatures are higher.

Is it feasible to run these power sources 70% of the time? In 2014, the EIA began publishing capacity factor data, and produced this chart:

Nuclear, coal, and natural gas -- the key technologies used in the U.S. to generate power on demand -- do appear capable of operating 70% of the time at least based on the monthly data. However, this would likely be costly and challenging due to the reduced time for maintenance and upkeep.

And of course, none of this considers fuel availability, but at the very least there'd be lots of extra gasoline and diesel available to run power plants, and many plants in the U.S. can actually switch from natural gas to petroleum.

What about charging all of those batteries?

There is some discussion in the comments about the challenge of electric demand for charging -- i.e., if everyone plugs in their EV to charge at the same time, could the grid handle it? Probably not, but as long as we're magically replacing all cars in 2019 with EVs, why not magically supply them with smart chargers as well? The average vehicle drove about 32 miles per day; with a (magically supplied) level 2 charger, that would require an hour or less to charge each day. Smart chargers which monitor price signals and utility commands could easily ensure all vehicles were fully charged when needed without overloading the grid.

Internal Combustion Engine (ICE) vehicles currently use 146 billion gallons of gasoline used each year annually. A gallon of gasoline represents about 33 kWh of energy. So all the ICE vehicles are burning about 4.8 million gigawatt-hours in their tanks.

The US currently produces about 4.2 million GWh of electricity annually.

The claim supposes that EVs would need to be delivered six times the energy as ICE cars. That is tank/plug-to-wheel EVs would have to be six times less efficient than ICE vehicles.

Instead, EVs are about 2 to 3 times more tank/plug-to-wheel efficient than ICE vehicles meaning a switch to EVs would require somewhere between 1.6 and 2.4 million GWh more electricity than the 4.2 million GWh currently produced. LShaver estimated 1.7 million GWh would be needed for EVs, so we're in the ballpark.

This is closer to 40% to 60% increase in electrical production.

While this looks like we'll be using more power, since EVs are more efficient tank and well-to-wheel (see References) this increase in electricity consumption represents a significant decrease in overall US energy usage.

This assuming we switch to EVs and nothing else changes, which brings us to the claim's fallacies.

This brings us to question the significance of the claim. The implication of the claim, and many like it, that it would take so many more resources to switch to EVs. But to go from the claim to the conclusion requires the counter-factual fallacy: we'll change one thing but everything else will remain the same.

We'd use less energy generating electricity with the oil

A common fallacy in these arguments is to only present the resources and infrastructure needed for EVs for shock value, but fail to compare them to what ICE vehicles are currently using. If we switched to EVs we would no longer be using the resources for ICE. So long as the EVs use less than ICE, it's a win.

We would no longer be burning 146 billion gallons of gasoline in cars. In the worst case, the oil to produce the gasoline could instead be burned to produce electricity. Generating electricity from oil is inefficient, the US no longer relies on oil for electricity, but let's say we did. 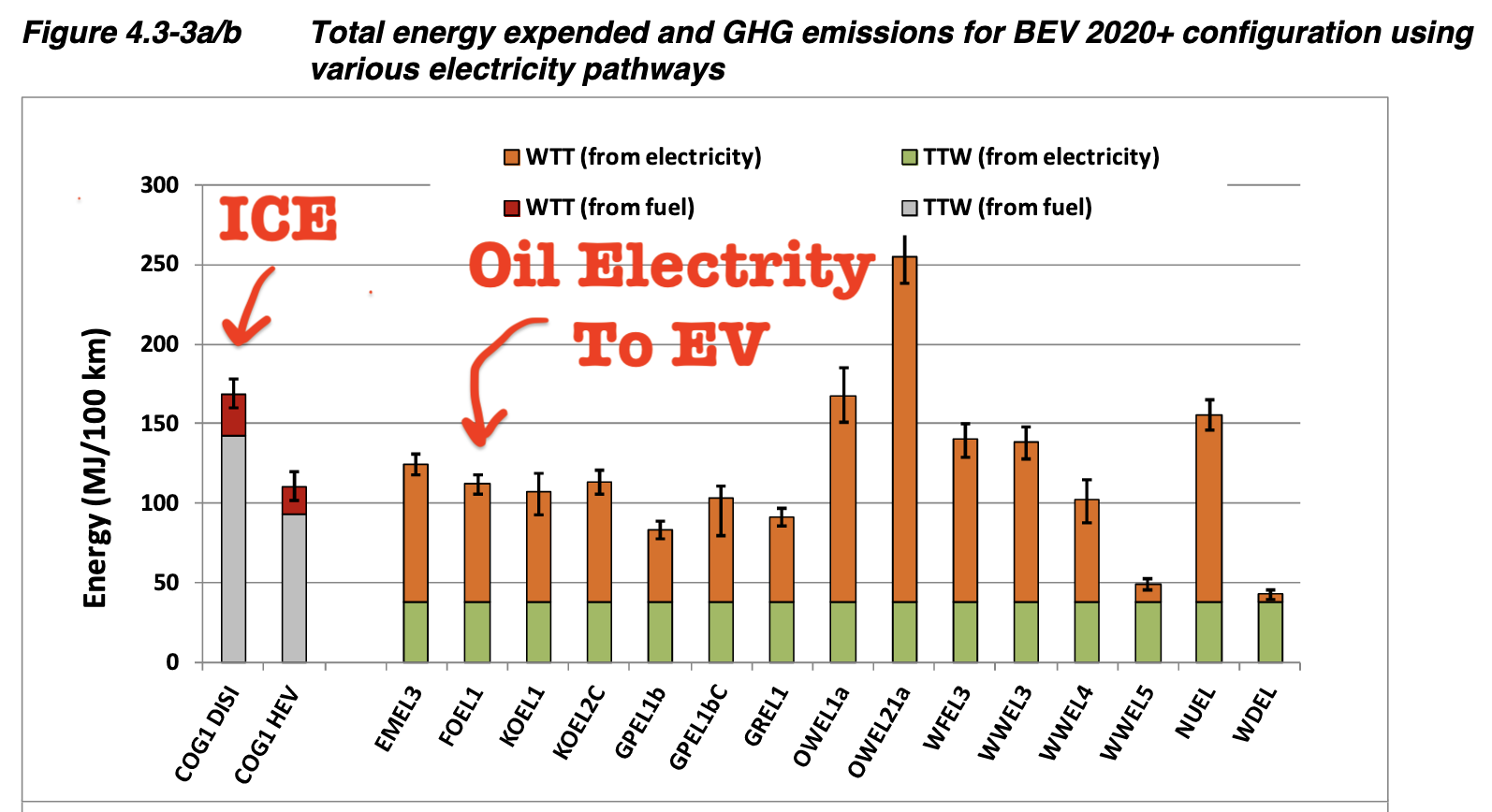 We wouldn't do this, but even if we did we'd save energy and emissions.

We're not going to switch to EVs tomorrow

The claim is trying to use the current numbers for electricity generation for a change which will take quite some time. Electrification of the US vehicle fleet will take decades. During that time the markets will react, fuel and power industries will react, infrastructure will adapt, our energy mix will change, and EVs will change and likely become even more efficient.

There's no harm in asking how much electricity we'd need if we magically switched to EVs tomorrow, it's a useful data point for perspective. However, for the claim to have significance with regard to electrification it would have to take into account these reactions. One of the major advantages of electrification is that EVs can adapt to changes in how we get energy much better than ICE vehicles. To ignore that is disingenuous.