Did Rudolf Steiner prove the contagiousness of varicella in 1875?

Pages like those from the National Vaccine Information Center NVIC or the Centers for Disease Control CDC make the following claim:

In 1875, Rudolf Steiner discovered that chickenpox was infectious to others after he took liquid from the chickenpox blisters of an infected individual and spread it to healthy volunteers.

— NVIC: "What is the history of Chickenpox in America and other countries?", no reference given for that.

In 1875, Rudolf Steiner demonstrated that chickenpox was caused by an infectious agent by inoculating volunteers with the vesicular fluid from a patient with acute varicella.

This is quite a remarkable claim to make.

On sites 'critical of virology' ('in general'), this is used to show that entities like the CDC or NVIC are very sloppy in 'just making up' ludicrous stories, like the above, and of course about 'viruses causing disease' as a collateral:

So here we are, left with a bit of a conundrum. Are we to believe that a 14 year old Rudolf Steiner performed experiments and wrote a paper proving chickenpox infectious in 1875? Does this paper even exist? […] Would these experiments even constitute proof of infection in the first place? If this work is such a seminal moment in the history of chickenpox, why is this paper seemingly impossible to find?

If such a paper exists and was written by a 14 year old Rudolf Steiner, it appears from his statements later in life that he was unconvinced by his own proof for the infectiousness of disease. Steiner was very much a believer in the mental and spiritual cause of disease and not a physical one such as being infected with “virus” particles. It was the person’s fear, anxiety, or even knowledge of the disease itself which manifested the symptoms rather than the action of a non-living obligate parasite. For now, without an actual copy of Rudolf Steiner’s own work to base these unsubstantiated repeated claims on, it remains a mystery that hardly constitutes proof of the infectiousness of the chickenpox or any other “virus.”

There are of course indeed reasons to doubt the original claim made by the CDC:

Rudolf Steiner is a well known historical figure, not least as a "polymath", and some of his adherents will claim him to be some kind of genius.

But did he do what the CDC above claims? Show proof of contagiousness of a viral disease, when his later writings demonstrably show a very different approach to illness and especially contagious diseases? And especially since in 1875, Steiner would have been indeed only 14 years old?

No, but Johann Steiner did.

As identified in the blog referenced in the question, Rudolf Steiner, the well-known polymath would only have been 14 in 1875, so is an unlikely author of the paper.

Does this throw into question the very existence of the paper? Not necessarily - as also identified in the blog, there are many citations to the paper which don't mention the author's first name, or mention a different initial:

So it seems that what's happened here is an embarrassing confusion between the real author, and the more famous figure sharing their surname.

A bit of digging uncovers a Johann Steiner heading a pediatric clinic in Prague at the right time. In this biography (in German), it identifies him as working on varicella:

[...] dealt primarily with various childhood diseases, especially with the varicella and their vaccinability [...]

At some point, somebody seems to have been looking for a first name for the "Prof Steiner" who authored this famous paper, and guessed at the more famous Rudolf. This mistake has then been copied by other people who, even if they tracked down the original paper, wouldn't immediately realise that he was not the author.

Note: This answer is Community Wiki, because all the research is from LangLangC's answer, I just think that answer emphasises all the wrong things.

Rudolf Steiner was indeed born a bit late in 1861 for having authored a seminal paper in the history of medicine and even virology in 1875 at the age of 14.

So, 'the doubting website' is correct in disputing even the possibility of Steiner being the author of this 'alleged' paper. But what's going on here?

Neither the CDC nor the NVIC cite any proper sources for their claims, one of which at least looks even like plagiarising the other. So, does any paper exist in the history of varicella research similar to the ones described above?

Going back we do find a few other papers that seem to make reference to the one sought:

But this is already a "P Steiner", not an "R Steiner".

Another reference —this time to "G Steiner"— is found in

At other even earlier times this paper is referenced just as "Steiner" (doi).

But perhaps as early as the 12th, quoted in question from the 13th edition, and even in the latest version, 14th edition from 2021, which claims to have zero errata pending, it says:

In 1875, Rudolf Steiner demonstrated that chickenpox was caused by an infectious agent by inoculating volunteers with the vesicular fluid from a patient with acute varicella.

Time to clear that up.

On that site claiming to be skeptical about "all of virology's lies", the very existence of the paper is called into question.

So, does this paper exist?

Yes. It does. Although for example PubMed is unaware of it. It is shown below, and thus any further speculation arising from 'non existent paper' seem moot…

The references uncovered so far are sometimes quite a bit wobbly on the details.

The proper citation is spelled out in full:

For the paper, that one is called: "Wiener Medizinische Wochenschrift", (not something like "We in" etc) which is archived and digitized at the Austrian National Library

Since the article is very short, I reproduce it here in full in two pictures: 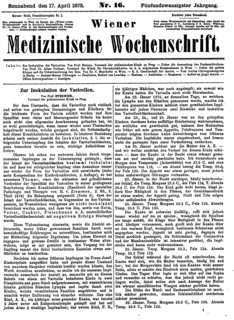 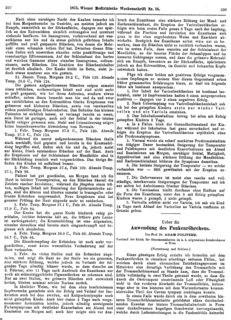 As can be seen, the columns are the page numbers, so a proper citation would list 305 as the reference, not 306 as the examples above.

The author is now just given as "Prof Steiner of Prague". Absolutely no first name present on that paper.

Even assuming a "Genius Rudolf Steiner", writing about an experiment at 14 years of age might be remarkable, but holding the title of Professor seems impossible.

So who is this Steiner, if not a Rudolf?

We find for example another standard work of reference from that time, a book called "Compendium der Kinderkrankheiten für Studirende und Ärzte", authored by Johann Steiner, Leipzig: Verlag von F.C.W. Vogel 1872. From this work is its English translation on archive.org:

FIFTEEN years. of uninterrupted activity in the Francis Joseph Hospital for Children in Prague, […] and partly in the independent position of Teacher and Physician in Ordinary to the Hospital, have encouraged me and given me some claim to write this treatise. […]

This is an acute, epidemic, and

This Johann Steiner led the Children's Hospital in Prague ("Franz-Josef-Kinderspital") at the time, and has its own biography entry read:

This addition of an arbitrary erroneous first name seems to have happened around 2008, with — Gretchen Hoffmann: "Chickenpox", 2008. among the first to conjure it up, at least as far as full text searches of digitized books available via net searches allow such conclusions.

Curiously, even though a 2010 German text book still uses only the last name in its 2010 third edition, when this very same edition was translated into English, the name "Rudolf" appears.

No, Rudolf Steiner did not conduct these experiments or write anything in 1875 about varicella viruses. Johann Steiner did.

All those websites —like the CDC in their reference 'pink book', and those then copying and thus propagating the errors from it — use an unverified, unreferenced and very possibly plagiarized invention for the first name that is missing in the original publication.

As listed in examples above: Many authors accumulated different errors (plural!) in their copying of personally unread reference material: for the author names, the article titles, the journal names, the page numbers, in essence pretending proper reference work, and thus committing plagiarism in that part.

Not the answer you're looking for? Browse other questions tagged medical-science history history-of-science infection .

11
Does the practice known as MBP cause HSV-1 in infants?
6
Does this study show the CDC has covered up an autism/thimerosal link?
10
Did thirteenth century scholars attempt to determine the congealing of oil by reading Aristotle?
2
Have COVID-19 vaccination trials started in Seattle?
53
Do studies show that viruses are contagious?
7
Did the Catholic church prosecute Galileo because he was teaching unproven ideas?
6
Is a face shield as effective as a face mask?