The mystery of “Numbers Stations” 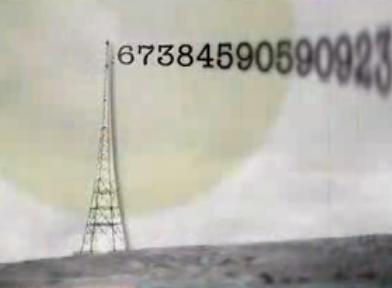 Mysterious shortwave radiobroadcasts similar to the one above have been featured in TV-shows like LOST and FRINGE, but are actually a real world phenomenon known as "Numbers Stations":

They are in a wide variety of languages and the voices are usually female, although sometimes men's or children's voices are used.

Here is a scene from FRINGE where Nina Sharp gives a short summary of the phenomenon.

Some have speculated that the signals from these "numbers stations" are operated by drug cartels. However, it's more likely they're run by intelligence agencies, as tacitly acknowledged by the British government, and accidentally by the Cubans.

No government has ever acknowledged a numbers station, but the British Department of Trade and Industry told London's Daily Telegraph in 1997 that there was no mystery and that the stations were not "intended for public consumption."

The Conet Project has a collection of Numbers Stations recordings.

Some of these transmissions are rather "unusual", e.g. Yosemite Sam or The Buzzer, so naturally there are speculations that at least some of these Numbers Stations are used for purposes outside the spying game. Maybe some of them are even hoaxes.

Yes, there have been several cases:

In 1988 Vaclav Jelinek, a Czech StB spy who operated under the false identity of Erwin van Haarlem, was arrested by British Special Branch detectives while receiving a numbers message on a shortwave radio in his London apartment. One-time pads were found on microfilm, hidden in bars of soap. The pads enabled the detectives to decipher some of the received messages, which were later used in court. Jelinek was sentenced to ten years of imprisonment.

More recently, there were several spy cases in the United States, related to Cuban numbers stations . In the 1998, the so-called Cuban Five from the Wasp Network spy ring, agents of the Cuban DGI (Dirección General de Inteligencia), received instructions by encrypted messages that were sent each day by the Cuban HF numbers station "Atencion".

Another one was the Ana Belen Montes case, a senior US Defense Intelligence Agency analyst, spying for Cuba. She was arrested in 2001 and the federal prosecutors stated: "Montes communicated with the Cuban Intelligence Service through encrypted messages and received her instructions through encrypted shortwave transmissions from Cuba". More on the Belen Montes case in this FBI affidavit (pdf).

In 2006, Florida International University professor Carlos Alvarez and his wife Elsa Alvarez were charged with espionage and acting as agents for Cuba. The US District Court Florida stated: "Defendants would receive assignments via shortwave radio transmissions. These messages were encoded in five-digit groupings. Once received, Defendants would input these coded messages into their home computer, which was equipped with decryption technology contained on a diskette" More in the Alvarez sentencing.

This is the most definitive proof - a Cuban spy known as Carlos Alvarez. He was prosecuted as being a spy in 2006 and a crucial piece of information in his prosecution was the fact he listened to coded shortwave radio stations - ie numbers stations. Here is the full indictment. http://www.latinamericanstudies.org/espionage/alvarez-prosecution.pdf

There is plenty of proof that these stations are used specifically for intel and espionage purposes. Plenty of official documents acknowledge them as spy stations.

I wrote a personal paper, some years ago, based on FBI and court documents. The paper is fully referenced and all sources, documents and FBI affidavit, from government and court trials are publicly available.

It describes how some agents were caught by the FBI using numbers stations.

Based on general information provided by the FBI, Diplomatic Security (DS) started in 2006 a comprehensive internal investigation that resulted in the identification of Kendall Myers as a probable Cuban agent. In 2009, the FBI started an undercover operation. The Myers were both retired at that time. An FBI undercover source approached the Myers and told them he was sent by a known Cuban Intelligence officer to contact them and get some information. Walter Kendall Myers agreed to meet the undercover source and to provide the requested information. During a series of personal meetings, and believing they were talking to a genuine CuIS officer, they revealed their 30 years of espionage activities for Cuba and various operational details. Among the operational details were the use of a shortwave radio53, e-mail communications with their handlers and their own code names. According to the affidavit, the FBI collected enciphered messages that were sent by shortwave broadcasts from the CuIS in Cuba to CuIS officers and agents abroad. The FBI identified that some of these messages, in de period 1996 – 1997, were broadcast to a CuIS handler of the Myers.

The issue with number stations is that there is no, publicly verifiable, information that details their purpose. As such it is difficult, if not impossible, to ascertain if the intent of a specific station is "spying game", government/military misdirection or simply a hoax. That said some number stations have been triangulated to emit from Akrotiri UK military base in Cyprus[*].

The only reason we are aware of there existence is that they are broadcast over frequencies that can be easily accessed with basic equipment.

A number of years ago BBC Radio 4 broadcast "Tracking the Lincolnshire Poacher", a radio documentary related to number stations. A wma of the broadcast can be found here:

Not the answer you're looking for? Browse other questions tagged history radio cryptography .

25
Does the NSA build backdoors into encryption algorithms?
40
Did the 1938 radio broadcast of 'The War of the Worlds' lead to mass hysteria?
46
Has it been mathematicaly determined that the Voynich Manuscript is not gibberish?
10
Did John Nash decipher code from a large board in the Pentagon?
6
Is it illegal to air a prank call in the United States because of FCC regulation?
14
Did a radio DJ lock himself in the studio and play the same song on repeat?
15
Did the NSA pay RSA $10 million to make Dual_EC_DRBG the default in BSafe?
29
Did US prohibit the export of the mere description of a cryptographic algorithm?