Are the British to blame for Israel's stray cat problem? [closed]

This post was edited and submitted for review 15 days ago.

Stray cats are extremely common in Israel and there is a common urban legend that they were imported by the British during the mandate period to combat a rat problem.

For example, you can see this claim repeated in this article from the Jerusalem post:

Ever since the British first brought cats over to Israel (then Palestine) in the first half of the 20th century to combat the rat problem, cats are a frequent sight on Israeli streets, particularly in Jerusalem.

Did the British cause the current stray cat problem?

Note: I assume there were some cats in the region beforehand, but the question is whether the British were the significant factor which caused the current overabundance of stray cats.

The other answers have shown that cats have been in (now) Israel for thousands of years. The extended claim of British importing cats in the ~1930s to deal with a rat problem appears to be an urban legend:

Local folklore has it that the British are to blame for Israel’s stray cat population, having brought cats in during the period of the Mandate in order to get rid of rats.

Yet the problem could have been created long before that: Geneticists from the National Cancer Institute study established that the world’s 600 million cats are descended from five wildcat matriarchs, including at least one from deserts of Israel, so it may be that the British are not entirely to blame.
Jessica Steinberg, Stray cats and their Tel Aviv strut, The Times of Israel, 2012.

The results revealed five genetic clusters, or lineages, of wildcats. Four of these lineages corresponded neatly with four of the known subspecies of wildcat and dwelled in specific places: F. silvestris silvestris in Europe, F. s. bieti in China, F. s. ornata in Central Asia and F. s. cafra in southern Africa. The fifth lineage, however, included not only the fifth known subspecies of wildcat—F. s. lybica in the Middle East—but also the hundreds of domestic cats that were sampled, including purebred and mixed-breed felines from the U.S., the U.K. and Japan. In fact, genetically, F. s. lybica wildcats collected in remote deserts of Israel, the United Arab Emirates and Saudi Arabia were virtually indistinguishable from domestic cats. That the domestic cats grouped with F. s. lybica alone among wildcats meant that domestic cats arose in a single broad locale, the Middle East, and not in other places where wildcats are native.
Driscoll et al., The Taming of the Cat, Sci Am., 2009 (pdf).

Here's a photo of an African wildcat (F. s. lybica): 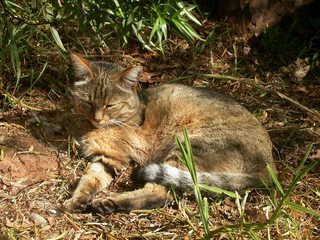 Image by Sonelle, at the Johannesburg Zoo; sourced from Felis silvestris lybica, Wikispecies.

Driscoll et al. also mentions a ~3700 year old ivory cat statuette made in (now) Israel, which they conclude "suggests cats were a common sight around human settlements in the Fertile Crescent" (they also mention a ~9000 year old feline molar tooth).

"Because there are so many cats, it's become so emotional in both ways," says Idit Gunther, a veterinarian and lecturer in veterinary medicine at Hebrew University of Jerusalem. ...

Many tour guides and Jerusalem residents blame the British, who ruled the city between 1917 and 1948, for bringing cats to the city via their ships. But the felines have lived in Jerusalem for thousands of years, Gunther says. In fact, the genetic makeup of most of Israel's street cats shows they are directly descended from the original African cat domesticated by the ancient Egyptians, and do not include genes of any wild European cat species, she says.
Sara Toth Stub, Jerusalem's Controversial Cats, USA Today, 2019.

There are several reasons for this. First, in Israel organic waste is often not properly treated. Food remains are found everywhere near garbage containers, in yards and parks, readily available for cats. Second, feeding stray cats is a widespread phenomenon in Israeli towns and villages. Individuals providing food for dozens and even close to a hundred cats are not uncommon. Third, Israel has a mild climate and regularly-fed cats easily survive the winter.
Brickner-Braun, Geffen, Yom-Tov, The Domestic Cat as a Predator of Israeli Wildlife, Israeli Journal of Ecology and Evolution, 2007. (pdf)

No, cats have been in Israel from at least 6000 BCE, and the land of Israel has had considerable connections with Egypt, where cats were worshiped. From Cats in Ancient Jewish Society by Joshua Schwartz from Bar Ilan University:

[...] since some of the earliest cats found in Palestine may have ultimately come from Egypt[...]

Cats were apparently found in Jericho as early as the pre-pottery Neolithic period, or sometime before 6000 BCE. There is unfortunately little that is known about these animals and at most it might be suggested that these cats co-existed in some form with humans, although they would hardly have been considered domesticated.

It is unknown whether there was any continuation of this early line of cats with those found in Palestine at a later date. As we stated above, there is a strong possibility that these ‘later’ cats came from Egypt and this might indeed be the source of the ivory carving of a cat from Lachish, c. 1700 BCE.

I also found the document referred to in the answer from SIMEL, which led me to this –

The William Davidson Talmud is a free digital edition of the Babylonian Talmud with parallel translations, interlinked to major commentaries, biblical citations, Midrash, Halakhah, and an ever-growing library of Jewish texts.

An extract entitled Berakhot 6a contains this:

One who seeks to know that the demons exist should place fine ashes around his bed, and in the morning the demons’ footprints appear like chickens’ footprints, in the ash. One who seeks to see them should take the afterbirth of a firstborn female black cat, born to a firstborn female black cat, burn it in the fire, grind it and place it in his eyes, and he will see them. He must then place the ashes in an iron tube sealed with an iron seal [gushpanka] lest the demons steal it from him, and then seal the opening so he will not be harmed. Rav Beivai bar Abaye ‡ performed this procedure, saw the demons, and was harmed. The Sages prayed for mercy on his behalf and he was healed.

Rav Bivi b. Abaye was the son of Abaye and the head judge in Pumbedita, which is in modern-day Iraq.

The city had a large Jewish population and was famed for its Pumbedita Academy - whose scholarship, together with the city of Sura, gave rise to the Babylonian Talmud.

We also know from the references to Babylonia in The Bible that the Near East and the Middle East did not live in isolation from each other. Cats are associated with human society (unlike wild species who may or may not inhabit a particular area), and it is reasonable to suppose that wherever there are human centres of population, there will be cats, who did not need to wait for the British to import them into Palestine.

It may be that this answer isn't specific enough and will attract downvotes, if so I'll delete it.

Not the answer you're looking for? Browse other questions tagged history zoology israel .

16
Are animals skinned alive or dead for their pelt?
6
Is Frontline (fipronil) an effective treatment for cat fleas?
5
Did the British attempt to rename the Taj Mahal?
5
Does "the captain's daughter" refer to a whip/cat o' nine tails?