Not The Bee has posted this commentary with a screenshot of some kind of an official WA authorities account claiming that dancing at private parties is not permitted:

I tried to verify if this is the case and I found this info page, where the following information is listed:

Dancing is not permitted except at weddings.

It's not clear but it could be interpreted that it is also forbidden at private parties. Is it?

Indeed, there is a state-government ban on dancing under certain conditions in Western Australia covering the 2021/2022 new year. The relevant legislation states:

Prohibition on music events and dancing ...

And here is a press release:

The Facebook comments are real and can be seen here. Here's my screenshot: 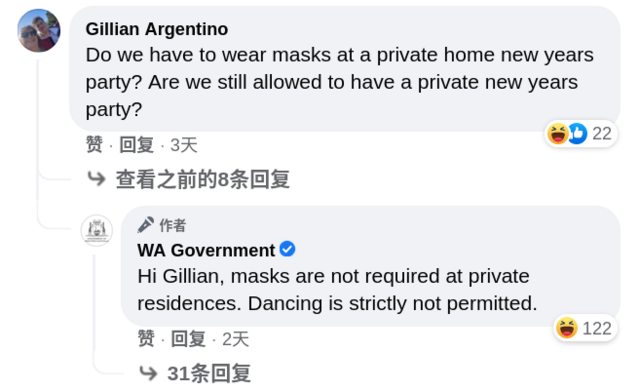 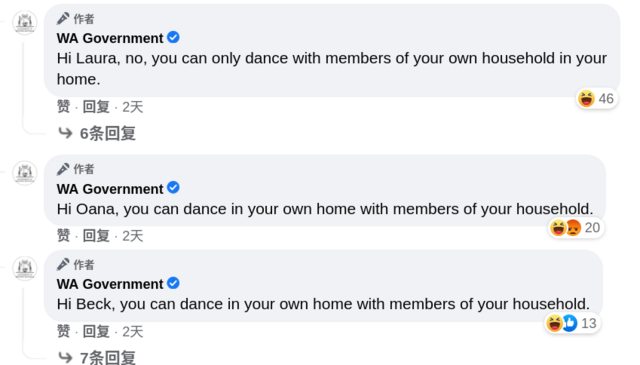 It appears that dancing is indeed banned in that area but it is a general ban instead of something targeted at New Years events.

Certain high-risk music events are not permitted as dancing is banned and seated food and beverage consumption requirements are in place as part of public health and social measures.

Any gathering of more than 500 patrons (whether in public of private) that involves the playing of recorded music or live performances involving singing or dancing for the purposes of entertainment is not permitted. In addition, certain specific music events are not permitted.

Carols by candlelight events are permitted.

Nightclubs will also be closed.

Dancing is not permitted except at weddings.

Dancing is banned (except for weddings), nightclubs are due to remain closed, and Australians are asked to remain outdoors when it is not possible to keep a physical distance. Private parties are however permitted, albeit without dancing.

Rebecca J. Stones’ answer has the facts and the sources. As someone in Western Australia, I think I can add the context.

The state government has used strong measures over the course of the pandemic, including limits on gatherings such as number of visitors, mask requirements, and yes, permitted activities like dancing.[3] The state’s success in keeping out the pandemic has been credited in large part to these measures,[4] which have also been highly popular with the public (the current government was re-elected in March 2021 in a landslide[5]). Restrictions have been short-term, and overall residents have been under far fewer limits than those in the rest of the country.[6]

On 19 December, an interstate traveller attended parties and nightclubs while infectious, beginning a new outbreak.[7] As a result, 30 new cases have emerged in three weeks, the biggest spike in months.[1] Restrictions were reintroduced on 23 December, and extended on 28 December.[8] The current end date is 4 January, although they may be extended again.

So much for the fully cited facts. Anecdotally, I can tell you that yes, the current restrictions are a bit weird and something of a joke… because they’re so selective. Why are they not requiring masks, or just banning gatherings full-stop? I can but speculate that it’s actually because of the holiday period: banning parties would be highly unpopular, so they tried to put in whatever measures they thought they could get people to accept, and ended up with this weird hodgepodge.

In that sense, yes, the measures could be said to be targeting Christmas/New Year’s gatherings, but in a “this is a period with a lot of social contact” way, not a “let’s ruin everyone’s fun like that town in Footloose” way.

2: Based on state and national populations from Australian Bureau of Statistics, as at 30 Jun 2021. Quick back-of-the-envelope calculations tell me that attempting to adjust to up-to-date figures would only make a difference in the last digit, at worst.

3: Wikipedia, COVID-19 pandemic in Western Australia. Yeah, I’m citing Wikipedia; I haven’t found a better timeline of what restrictions have been put in place and when—short of trawling back through the government’s announcements. But here’s an example of restrictions from Feb 2021.

6: From the last restrictions lifting in July up until the current ones in December, there were essentially no limits on most activities, gatherings, or in-state travel. (“Most”: some large public events were starting to have proof-of-vaccination requirements, and some remote communities considered vulnerable can’t be visited.)

Not the answer you're looking for? Browse other questions tagged covid-19 australia .