Has LSD 'been widely used in hospitals for the treatment of mental disorders'?

Operation Moneybags is a video purporting to be a documentary covering medical experiments on British troops,

The film has an opening card (27 seconds in) stating:

This film was made during the course of an experiment to test the possible effects of the drug, lysergic acid diethylamide - LSD 25 for short - on troops in the field. This drug has been widely used in hospitals for the treatment of mental disorders.

I'm doubting the legitimacy of both the video and the claim.

The video is not dated, and seems to be either something which wasn't intended for general distribution, or possibly is fake.

Yes, LSD has a history of psychiatric use

In terms of the number of doses administered in an official clinical setting, it might not fit the definition of widely, but it has been tried out for wide number applications.

From its first synthesis in 1938 to Bicycle Day in 1943 (when the developer Hofmann discovered its mind altering effects by accident) there was little usage. Since then, the manufacturer Sandoz explored possible clinical applications and eventually took it to market as Delysid: 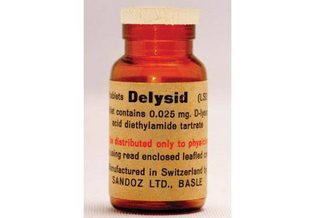 Variants of this product in images:

The package insert leaflet from ~1950:

The 1964 Sandoz catalogue entry for Delysid lists as applications in English language:

Delysid is used in analytical psychotherapy to elicit release of repressed material and to provide mental relaxation, particularly in anxiety states and obsessional neurosis […]

Delysid intensifies the reactions of psychotic patients, and useful information can be obtained by its use in selected patients. In certain forms of psychosis, particularly schizophrenia, and in chronic alcoholism, high doses may be necessary to produce the typical response to Delysid. […]

Throughout the 1950s research into LSD and eventual clinical practice grew substantially, until, as a DEA-report puts it:

Sandoz Laboratories, the drug’s sole producer, began marketing LSD in 1947 under the trade name “Delysid” and it was introduced into the United States a year later. Sandoz marketed LSD as a psychiatric cure-all and “hailed it as a cure for everything from schizophrenia to criminal behavior, ‘sexual perversions,’ and alcoholism.” In fact, Sandoz, in its LSD-related literature, suggested that psychiatrists take the drug themselves in order to “gain an understanding of the subjective experiences of the schizophrenic.”

In psychiatry, the use of LSD by students was an accepted practice; it was viewed as a teaching tool in an attempt to understand schizophrenia. From the late 1940’s through the mid-1970’s, extensive research and testing were conducted on LSD. During a 15-year period beginning in 1950, research on LSD and other hallucinogens generated over 1,000 scientific papers, several dozen books, and 6 international conferences, and LSD was prescribed as treatment to over 40,000 patients.

The movie in the question is an official government production found at the Imperial War Museum:

Answering to the veracity of the video:

[The "was LSD widely used part has been well answered, so I focus only on the video in question]

The video OP linked provides absolutely no further info, not even the name OP gives.

However, it almost perfectly matches up to an official UK government archive video with ONE major exception:

The title card(s) are changed.

But not completely changed: OPs title card is a direct quote from the governmental video except the one sentence about LSD being widely prescribed. Everything else, the narration, the video clips match up. Even the secondary.

However, the method of obtaining a digital version also seems to differ. OP's version is of much worse quality, as well as having two intro slides inverted (the two about where the volunteers are from are black text on white in the governmental version and white text on black in OPs).

To me this comes across as an earlier attempt at digitizing the film reel, with the Intro slides being added from an accompanying description text in post. Since the governmental website does not provide any other accompanying data, text or objects we cannot know which version came first, or where the sentence about widespread medical LSD use came from: Inserted by the first digitizer or originally present but removed for the official digitalization.

Not the answer you're looking for? Browse other questions tagged history military recreational-drugs medications .

17
Has Go ever been used to decide a war?
14
Are antipsychotic drugs vastly overused in the US?
18
Has the War on Drugs disproportionately affected minority communities?
11
Has the primary benefit of statins in reducing early deaths never been fully tested in comparative trials?
25
Has the Quran (the recitation) been preserved since Muhammad?
16
Are SWATs in the US mostly used for serving marijuana warrants?
35
Has the Holocaust been exaggerated?
3
Do statins contribute to dementia?
23
Has a weapon functionally equivalent to the AR-15 been available for U.S. civilian purchase since 1907?