Does China display the hammer and sickle above their domestic Gucci outlets?

This Gucci manager be panicking every time they open their shop. As it should be.

China loves metaphors, and placing the ☭ ABOVE the Gucci logo is a very clear metaphor for the power hierarchy.

Guess who’s in control? It isn’t the Gucci CEO, that’s for sure. 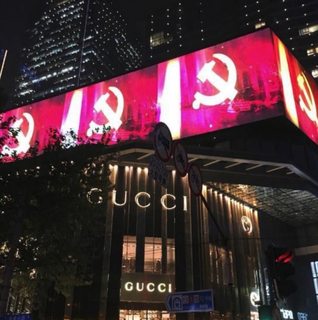 Do they or have they shown communist symbolism above their local Gucci outlets?

It appears to be an electronic display screen above the corner entrance of the IAPM shopping mall on Huaihai Zhong Road - the Baidu equivalent of Google's StreetView shows it in the daytime displaying nothing at all, along with a smaller "Boss" logo:

The mall itself is described in a newspaper puff piece as "features nine duplex stores, which were designed to house international brands such as Prada, Mui Mui, Gucci and Valentino, and has a 220-metre-long shopping façade on Huaihai Zhong Road that is a rare sight in the Puxi area"

At least superficially the property developer is independent of the state, being a Hong Kong enterprise nearly 60 years old and more recently prosecuted for corruption (says WP https://en.wikipedia.org/wiki/Sun_Hung_Kai_Properties).

Large electronic display signs have long been a feature of popular public spaces such as Times Square in New York or Piccadilly in London, and in general are available for displaying advertising, i.e. commercial or state propaganda. So while it's possible that this is a non-financial arrangement (display news of the Party Congress or get "investigated") the original story doesn't offer any evidence for this, and jumps to the unwarranted conclusion that this is Gucci being specifically forced to kowtow.

At least this one photo seems to be real: It is featured in an article from The Wall Street Journal, which is described as "Updated Dec. 10, 2017 11:59 pm ET" and according to the article "Appeared in the December 11, 2017, print edition", written by Chun Han Wong.

The photo is captioned as "Screens above a Gucci store in Shangha (sic!) show Communist Party symbols and General Secretary Xi Jinping's slogans, as part of a nationwide campaign to publicize the outcome of the party's 19th National Congress." It is credited with "PHOTO: JAMES T. AREDDY/THE WALL STREET JOURNAL". According to his WSJ author page, "James T. Areddy is a China-focused correspondent for The Wall Street Journal."

I'm unsure however where in the photo "General Secretary Xi Jinping's slogans" are displayed. Perhaps they were faded out of the LED display (if this is one) the moment the photo was taken.

The 19th National Congress of the CCP took place in October 2017.

It might be interesting to note, that the design of hammer and sickle seems to be specific to the Chinese Communist Party, and distinct from other designs such as the Soviet Union's, as may be seen from the "knob-shaped" handle of the sickle.

A similar photo showing hammer, sickle, and Chinese characters underneath appeared in an article of the art magazine frieze from 8th December 2017. The caption reads "Communist Party Propaganda above the Gucci shop, Shanghai, 2017", but the photo does not seem to be credited. Possibly, the display may show at least hammer and sickle, and hammer, sickle and some slogan alternating.

Not the answer you're looking for? Browse other questions tagged china marketing .

12
Does China have the death penalty for spammers?
40
Does China control 85% of the supply of rare metals used in lithium batteries?
1
Did China steal technology from the USA to make their J-20?
27
Did China shut down a port for one COVID-19 case and did this closure have a bigger impact than the blocking of the Suez canal?