My translation: In November 2021, the German chemist Andreas Noack spread the conspiracy theory that producers of Corona vaccines secretly add graphene hydroxide to their vaccines. The supposedly used graphene hydroxide behaves like 'molecular razors' in the human body that the body can't break down, and which thus stays in the body.

What is the evidence and how valid is this claim?

The evidence is very questionable and does not support the claim.

The linked source, and the claim, both attribute the discovery of the proof to Dr Pablo Campra Madrid, affiliated with the Universidad de Almería (UAL). This is a real person, and the report he published with his findings is available online. However, the linked source is dated Dec 1st, and the report was published on June 28th - and has be thoroughly debunked since then.

The above debunkers are from Maldita.es, which describes itself as

The debunking was first published on Jul 2nd, updated with additional expert feedback on July 5th, and the current version is dated Nov 8th. Given the thorough debunking of Campra's already widely-circulated report, the claim that Dr Noack made ground-shaking revelations by revealing Dr. Campra's June 28th study on November 18th does not stand muster.

For those who do not read Spanish, the main points of Maldita's analysis are:

Therefore, if the proof of the claim submitted by OP is to be found in Campra's report, there is no solid evidence to support the presence of RGO in Pfizer's vaccine.

The essence of the issue with graphene claim is that RNA looks very similar when analyzed that way:

Campra indicates that the absorption maximum that has been measured with the sample is 260 - 270 nanometers (nm). And he points out that precisely reduced graphene oxide (RGO) has absorption maxima at 270 nm, so it is compatible with the result of the sample analysis .

However, Gabriel Alfranca Ramón, doctor in Nanobiomedicine and researcher at the CSIC, explains that this maximum is also compatible with the peak observed in nucleic acids, such as RNA, so the spectrophotometry carried out "is not at all conclusive".

In his 76-page report (on researchgate) Campra doesn't seem to address this issue. (RNA appears once in the title of a paper from the references section, but that paper appears cited nowhere in the main text.)

In the most recent version of the report (dated Nov. 2) Campra basically looked at all Covid vaccines, including Astra Zeneca, and he basically found very similar patterns in all of them, because he's only looking at two or three peaks in the Raman spectroscopy data. For example he lists these different "bits" of a Pfizer and an AZ vaccine as strong candidates for graphene. (There's a similar one for Moderna.) 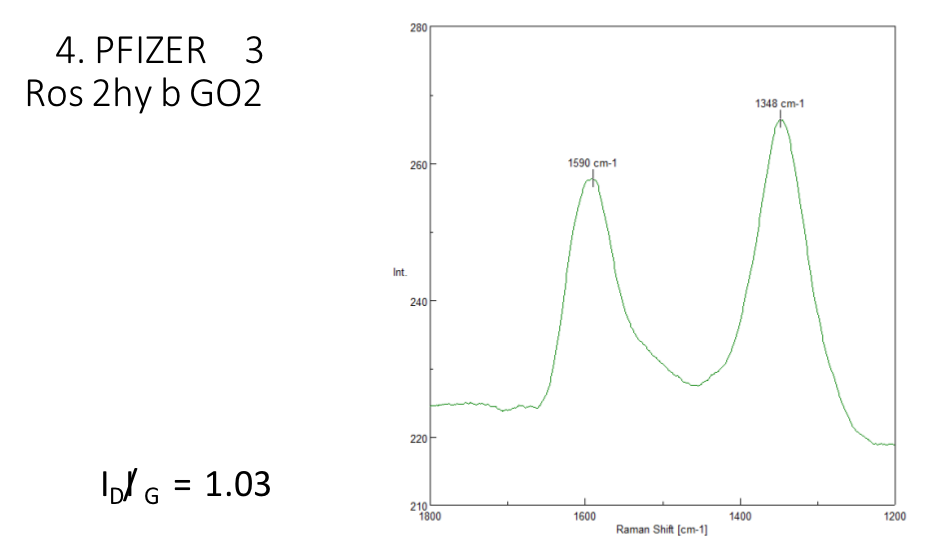 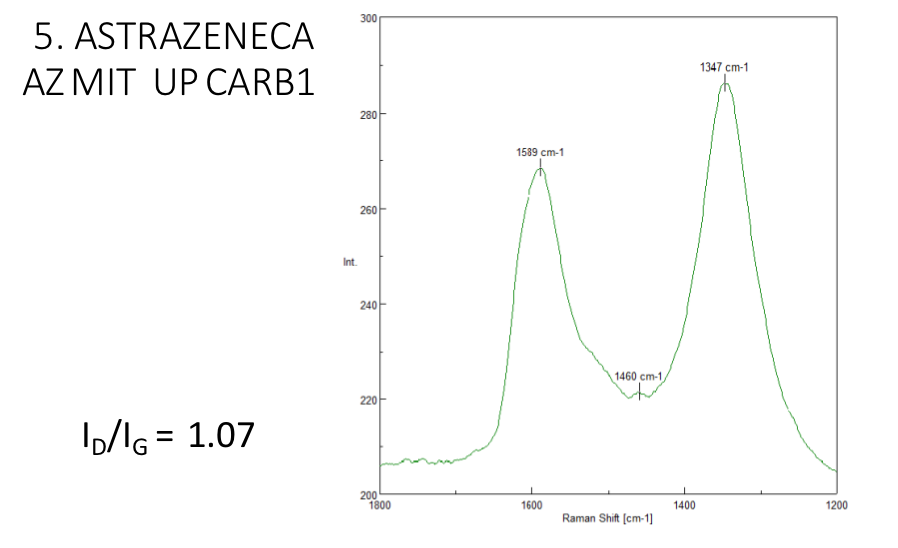 Basically, he goes by the peaks at 1350 cm-1 and 1590 cm-1 and the ratio between them... and he compares those with the similar data for graphene, but there's no data given in Campra's paper for what that would look like for RNA (only for graphene and graphite).

However, if you look at (numerous) peer-reviewed publication that try to apply Raman spectroscopy to biological matter, it's indeed (as the "counter-experts" cited by the newspaper say) no easy task to tell apart different kinds of such matter using Raman spectroscopy, especially using just those two peaks.

To me, as a non-expert, it's not inconceivable thus that a mixture of A and G could produce near equal peaks at those two frequencies.

Basically, Campra is relying on an established method known to easily distinguish graphene from graphite (the latter just has huge peak the higher of these two frequencies--see e.g. fig 5 in this review)... but not from RNA. And nobody expects graphite in the vaccine, so that's the wrong metric to judge false positives by, IMHO.

If one were to take Campra's claim at face value, one also has to ponder how "graphene" could have possible made it into vaccines manufactured by vastly different technologies (mRNA-LNP Pfizer vs DNA-adenovirus based AZ) and made in different plants.

The article is in a provisional stage as you can see in the first page: 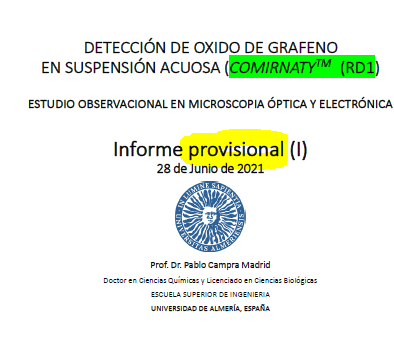 Also. It states that further analysis needs to be done:

Let me freely translate to:

An observational and merely microscopic study of the sample is presented below,

But the main red flag is that this sample was received from a person already creating disinformation efforts as @Tucuxi helpfully explained in his answer.

Not the answer you're looking for? Browse other questions tagged covid-19 vaccines pharmaceutical .

83
Are there vaccine ingredients which may not be disclosed ("hidden", "trade secret", or similar)?
13
Does flu vaccine make us more vulnerable to COVID-19?
7
Do the COVID-19 vaccine candidates risk inducing infertility in women?
10
Do young Pfizer COVID-19 vaccine recipients have 200x the background rate of myocarditis/pericarditis?
50
Does the third dose of a COVID-19 vaccine "boost antibody levels"?
9
Did Pfizer intentionally delay the COVID vaccine until after the election?
62
Is the COVID-19 vaccine 50 times more likely to kill young people than COVID-19 itself?
31
Does the AstraZeneca COVID-19 vaccine (or any known vaccine) increase infection rates?