Is it possible to get a reliable match from 'microscopic hair analysis'?

In her 1999 memoir, 'Lucky', Alice Sebold describes being raped and the arrest and conviction of the male perpetrator, which took place in 1981-1982.

Several months after she was raped, a man passed her on the street and made a comment which she believed was directed at her.

She believed that this man was her rapist, and provided a sketch to the Syracuse police.

According to the book, it matched on all 17 features, and Broadwater served 18 years in jail.

The book was optioned into a movie by Netflix, however the producer felt that the story was less than credible, hired a private investigator, and the conviction has now been vacated.

He spent years in prison for the rape of author Alice Sebold, the subject of her memoir, 'Lucky.' A judge just exonerated him

The 'Netflix lawyers' are apparently the fifth set of lawyers hired to work on the case.

It appears that since around 2015 it has emerged that such hair analysis is unreliable and the FBI often overstated it in cases, resulting in hundreds of cases being overturned. In the Know: FBI Admits Flaws in Hair Microscopy Testimony

Obviously we do not know if Sebold or the expert witness accurately reported the quality of the hair evidence, so I'm not going to assume that the specific 'all 17 features' claim is accurate.

That said, in general would it ever be possible using early 1980s microscopic hair analysis to be highly certain given a pubic hair sample from a suspect, and a pubic hair recovered from a crime scene/victim, that the crime scene hair comes from the same person?

In this NYT video it is said that a 2002 paper found that the false positive rate is 11% when also tested via mtDNA. The paper referenced is probably "Correlation of microscopic and mitochondrial DNA hair comparisons" by Houck and Budowle.

Human hairs submitted to the FBI Laboratory for analysis between 1996 and 2000 were reviewed. Of 170 hair examinations, there were 80 microscopic associations; of these, only nine were excluded by mtDNA.

Looking at the Wikipedia page on the matter, that alas seems to be the only quantitative study published... in decades.

Paul Kirk conducted some of the first studies on the potential forensic application of microscopic comparison of hair in the United States (Gamble and Kirk 1941; Greenwell et al. 1941; Kirk 1940). In addition to his publications on the microscopic characteristics of human hairs, he conducted hair-comparison studies using his criminology students. All of the students were required to compare a single hair to 20 known samples, where all of the known samples were of a similar color and from individuals of a similar age. He reported that no student who completed the routine examination failed to report the association correctly (Kirk 1940).

Some critics emphasize the fact that microscopic-hair examiners are unable to statistically quantify the significance of an association (see, for example, Robertson 1999). The development of a statistical model would involve frequency data across the entire population for all microscopic characteristics present in hair. Although this is an attractive idea, the difficulties associated with generating such a database have been, to date, practically insurmountable. In order to generate frequency data for hair characteristics, microscopic-hair examiners might be required to use a “checklist” or “archetype” approach rather than the pattern-recognition process normally used. [...]

Given that useful statistical data are not generated regarding the relative frequency of an evidentiary hair, one must accept that the answer to the question, what proportion of the population would have characteristics that are the same as the evidentiary hair? is we do not know. Similarly, the answer to the question, what is the probability of a coincidental match between the questioned hair and the known sample? is we do not know.

There were actually some kind of replications of those 100% experiments... using similarly well chosen samples, e.g.:

Strauss (1983) conducted a study using 100 individuals comprising 54 Caucasian, 19 Negroid, and 27 Mongoloid. From each of the 100 individuals, 7 hairs were chosen to represent the widest variation possible. These were mounted on glass microscope slides and were designated as the known samples. One hair was also chosen from each of the 100 samples, mounted on glass microscope slides, and designated as questioned hair samples. All 800 hairs (700 known hairs and 100 questioned hairs) were individually characterized using a checklist and punch cards.

IMHO, unfortunately these [only] prove that if one person (who sets up the samples/experiments) can distinguish them, so can other people.

Perhaps more realistic, when using a sample not in the dataset:

Bisbing and Wolner (1984) conducted a series of studies using known head-hair samples recovered from 17 sets of twins and 1 set of identical triplets. [...] This study involved removing 2 or 3 hairs from 7 randomly selected unmounted samples, which were then mounted on glass microscope slides. For each of these 7 “questioned” samples, between 5 and 10 known samples were randomly selected from the 74 mounted known samples for microscopic comparison. There were 52 comparisons made by each of the two examiners, for a total of 104 comparisons. Because of the random sampling, none of the true known samples for the questioned hairs was present in any of the comparison scenarios. The two examiners correctly excluded 96 of the known samples as being possible donors of the questioned hairs. Eight of the questioned hair samples were incorrectly associated to the known samples (5 by one examiner and 3 by the second examiner). In one of these cases, a sample of the fraternal twin’s hair was present in the known pool and was correctly eliminated. In the other simulated cases, the questioned hairs were incorrectly associated with control samples that were neither the true source nor the twin of the true source.

It is interesting to note that 7 of the 8 incorrectly associated hairs were classified by the authors as being blond, common, featureless hairs. These results serve to reinforce that human hair cannot be associated with one person to the exclusion of all others. In addition, this study served to show that caution is necessary when comparing common, featureless hairs.

For pubic hair even less data appears to exist. I could not easily access this study myself but according to one summary:

In Gaudette and Keeping’s study, 13 of 100 individuals had a strand of scalp hair that was indistinguishable from that of another individual. For pubic hair, the number was 25 of 60 individuals.

I asked this question because I was doubtful about the claims in Sebold's book, in view of the fact that there has been a high-profile exoneration.

I did not expect to find specific information about the trial, however a document has been published that suggests that the claim made in the book about '17 points' is not true.

This news report tells us that the evidence (hair, as well as any other forensic evidence) was destroyed in 1989.

Secondly, this piece of evidence appears to represent the actual claim made in 1981 (recovered from Top Story with Tom Llamas on Twitter) 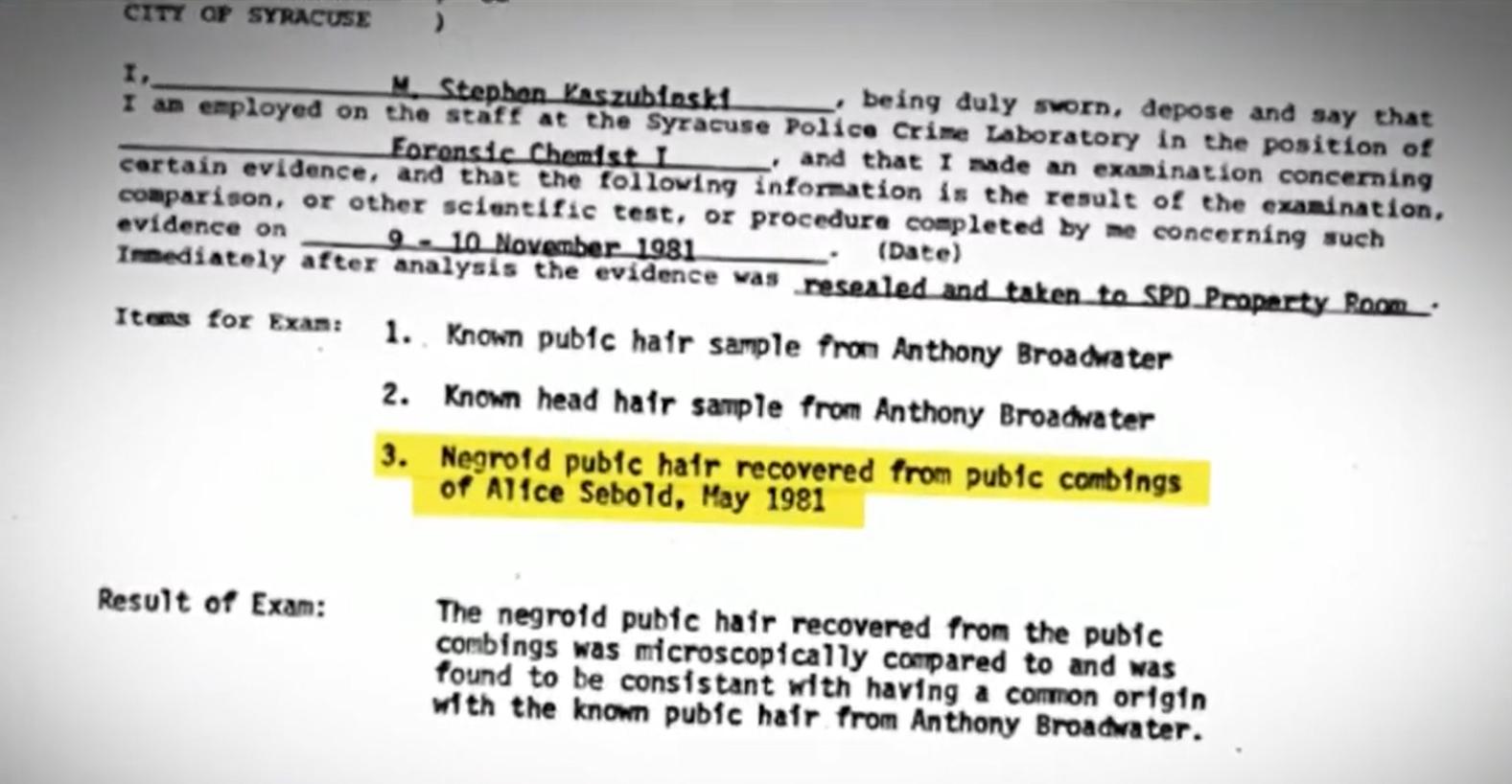 "The negroid pubic hair recovered from the pubic combings was microscopically compared to and was found to be consistant [sic] with having a common origin with the known pubic hair from Anthony Broadwater."

According to this news report quoting Timothy Mucciante, the producer and disbarred lawyer, the '17/17 match tests' did not appear at trial. Mucciante is not the most credible of sources as he is disbarred for financial dishonesty, however the lab report suggests that the claim did not go beyond 'could have come from the same man'.

This report is not very clear on whether they spoke to Kaszubinski recently, or are referring only to trial records, however it suggests that Kaszubinski did not claim the hair was a unique match, but does not give any degree of confidence as to the chance that the hair came from someone else:

As for the microscopic hair analysis tying Broadwater to the rape, the forensic chemist who testified at trial admitted that there was a “possibility” the rapist’s hair might have belonged to someone else.

All chemist Merrill Stephen Kaszubinski could say was that the rapist’s hair was “consistent” with Broadwater’s hair; Kaszubinski couldn’t say how many other people might have similar hair.

Not the answer you're looking for? Browse other questions tagged criminology hair forensics .

10
Does hair fall first from the top of head because of reduced blood supply due to lack of movement?