It's been claimed in the media that

Back in September, health care analyst Charles Gaba also told the New York Times that counties where Trump received at least 70% of the vote in the 2020 presidential election, COVID-19 had killed about 47 out of every 100,000 people since the end of June. But in counties where Trump won less than 32% of the vote, the number was a fraction of that — about 10 out of 100,000.

A more detailed version of the claim appears on his website: 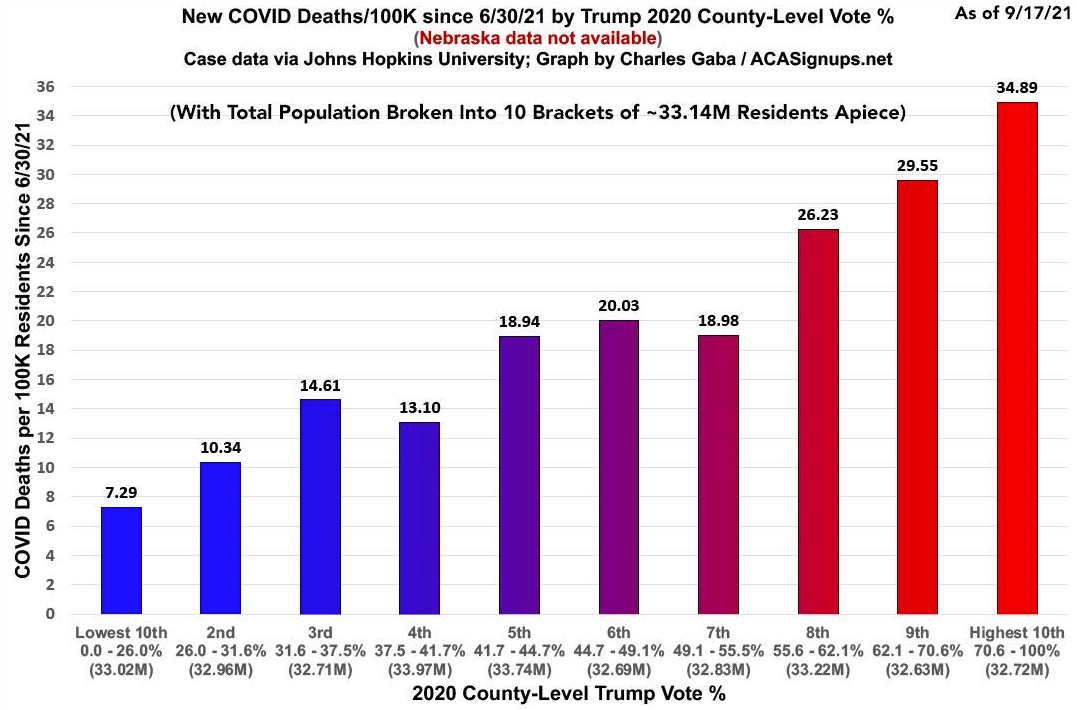 That ratio seems to refer to the higher vs lowest 10th population "bracket"; the latter voted <26% (not <32%) for Trump, so he was probably slightly misquoted or miscommunicated that to the press. (The highest bracket voted >70.6% for Trump, so that fits. The brackets here are taken by equal division of the population rather than vote share deciles, so the division is somewhat confusing/unusual.) The Covid-19 death rates (per 100K pop.) in these two extreme brackets were 7.29 vs 34.89, which gives a 4.786 multiplier.

the [death] ratio between the highest and lowest bracket has increased further yet, from 4.79x higher to 5.46x higher in just 8 days. 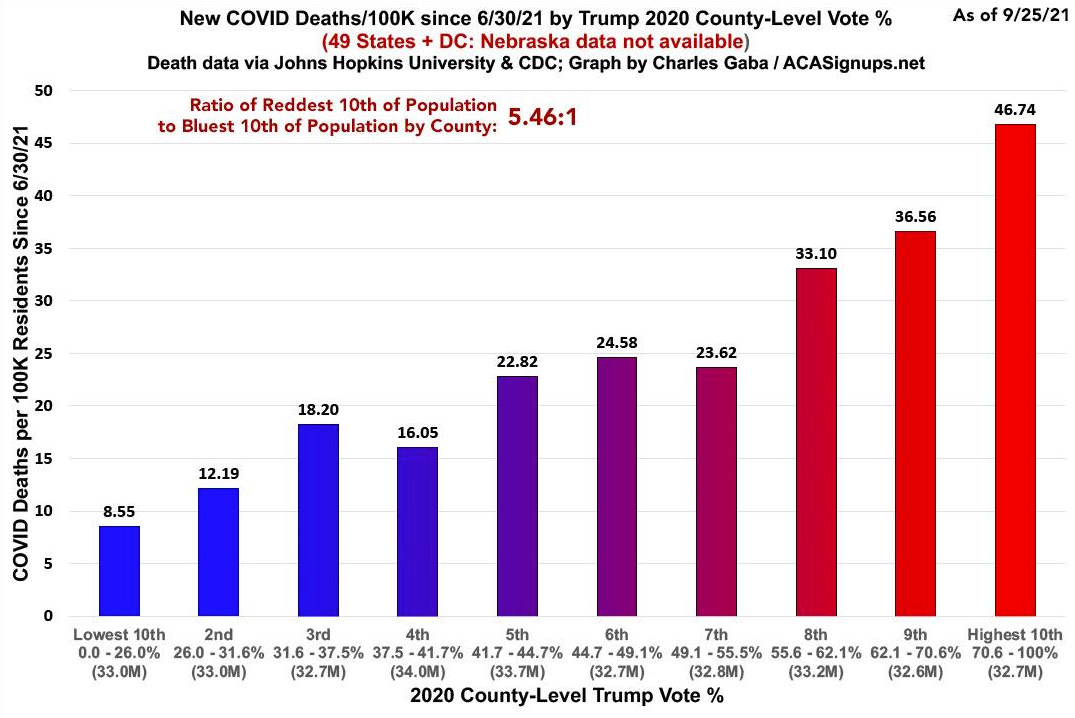 Also worth nothing perhaps that an earlier (peer-reviewed) analysis by Gao and Radford covering the time period of April 6 to May 25 of 2021 found that:

controlling for several potential confounders, counties with higher levels of Trump support do not necessarily experience greater mortality rates due to COVID-19.

So what Gaba claims is a pretty substantial change in that regard.

This G&R paper is actually a bit confusing [to me] as they include stuff like stay-at-home policy/orders and restaurant closures as independent variables/confounders, basically assuming that whether these orders are issued is unrelated to the political orientation of the county inhabitants. Apparently G&R considered only whether compliance with such orders is a function of political orientation of the inhabitants.

There is also a much simpler paper/model on 2020 by Neelon & al. but at US state rather than county level. It found a reversal of Covid-19 death odds from Democrat-led to Republican-led states in July of that year, i.e. after July the odds were greater in states with a Republican governor. That analysis stops in mid Dec 2020 though. In relation to that simpler model, Gaba's claim is less surprising, but the [death] odds ratio determined in that paper is fairly small i.e. 1.18 (95% CI: 1.02-1.31) for July-Dec 2020. Gaba seems to claim a much more sizeable effect (later on). For the sake of trying to come up with a similar two-bracket measure from Gaba's last graph, if I average the last 5 and the first 5 bins, the death [odds] ratio for these is 32.92 : 15.45 = 2.12. If using instead the last 4 vs first 6 bins (which puts the voting cutoff at 49.1% -- the closest to 50% in that bracket data) the result is a fairly similar 35.005 : 17.065 = 2.05 ratio. These ~2 ratios are less shocking than the ~5 ratio of the extreme brackets, but still quite a bit higher than the 1.18 from Neelon's paper.

Charles Gaba here. If you have any questions about my methodology, feel free to inquire.

The county-level death rate data comes from the Johns Hopkins University Center for Systems Science and Engineering Github, except for Nevada & Utah (which are via the NY Times Github) and Florida, which is via CMS's COVID-19 Community Profile Report:

14
Is there a correlation between vaccination levels and new COVID-19 cases?