Can defrosting vacuum-packed fish in its packaging cause botulism?

There are many warnings on the Internet about vacuum-sealed frozen fish thawed in its packaging potentially causing botulism:

There's a lot to love about individually wrapped pieces of frozen fish: they're easy to store, prepare and portion.

But what if we told you that those handy vacuum-sealed filets also pose a huge hidden health risk? Eeek!

Few people realize that thawing fish in its packaging presents a high risk for botulism.

Yet despite this apparent (I quote) "huge hidden health risk", I've never seen a warning on a vacuum-sealed pack about this, and the CDC's latest available National Botulism Surveillance Summary, 2018 lists no cases of this happening. In fact, all reported 18 foodborne cases involved homemade preserved food.

Have there been any recorded cases of thawing vacuum-sealed fish actually causing botulism? Primarily interested in "normal" usage (eg. defrost in fridge overnight or at room temperature for a couple of hours), not pathological cases like leaving the sealed package out in the sun for a week.

The point about botulinum toxin is that it grows best in anaerobic conditions. (Detection, Identification and Differentiation of Clostridia Species) This is typically associated with canning and other forms of preservation, where there is sufficient time for toxic amounts of the toxin to be produced.

The other point about anaerobic conditions is that they inhibit other forms of spoilage, such as moulds (Can molds grow in the absence of air?). This means that vacuum-sealing, as with canning, is a form of food preservation, where food might appear not to have spoiled after a long period of time, because the visual signs of spoilage are absent. Botulism-spoiled food may or may not have a bad smell (Do foods containing botulism have a bad odor or taste?).

It is common to vacuum-seal meat stored in commercial chillers, giving a shelf life of up to 27 days (for lamb, UK practice). A study in the UK found that while food is recommended to be stored below 5C, domestic refrigerators are rarely this cold. However even after 50 days, the vacuum-sealed meat did not show toxic levels of botulism.

The fish botulism case is obviously very relevant to the OP's question, and likely to inform CDC advice.

Three people in Hawaii were hospitalised with botulism poisoning, treated with antitoxin, and survived.

Another outbreak was caused by foil-wrapped baked potatoes. Here it was noted that during baking the environment improves for botulism, since the inside of a foil-wrapped potato never gets hot enough to kill the spores, and subsequently the cooled, but warm spores, are stimulated to grow in an environment where competing microorganisms have been eliminated. In the study it was found that the 'tightly-wrapped' potatoes would produce sufficient toxin after at least three days at room temperature.

There were several more cases involving vacuum-packed fish. In 1997 (https://www.sciencedirect.com/science/article/abs/pii/S0168160598000804) two Germans were poisoned when they consumed hot-smoked Canadian whitefish, which had been prepared in Finland. The botulism was found to be a North American strain.

The details of the processing were as follows:

The study found good practice with no evidence that the fish had ever been improperly handled. The study notes that more salt would have eliminated the risk, but this is unacceptable to many consumers.

In a similar case in France, the people got sick again after eating Finnish-smoked Canadian fish. The fish was purchased in Finland on 22 August, stored with ice packs in the family car during the 14 hour drive, and eaten on 6 September, two days before the expiry date. This case (https://www.researchgate.net/publication/40034952_Botulism_and_hot-smoked_whitefish_A_family_cluster_of_type_E_botulism_in_France_September_2009/link/5811c5d108ae009606bee685/download) was less thorough than the previous one, and the family fridge temperature was not checked. However, they concluded that the likely >5C temperature during transport, as well as the likely >5C temperature in the family fridge for 2 weeks, could have given rise to the poisonous levels of botulism.

This study (https://www.researchgate.net/publication/279955141_Clostridium_botulinum_in_packaged_seafood_risk_profile) seems to be the best source on botulism in vacuum-packaged seafood, and shows that botulism toxin is produced in just a few days at 30C, and in 10 days at 8C temperatures. Growth as low as 3.0C is possible, given weeks of storage. For seafood stored specifically in vacuum packaging that is not frozen or below 3C, the recommendation is to use a 3.5% brine.

Recommended storage conditions in vacuum are then 5 days at up to 10C, 10 days at 5C, or below 3C or frozen. 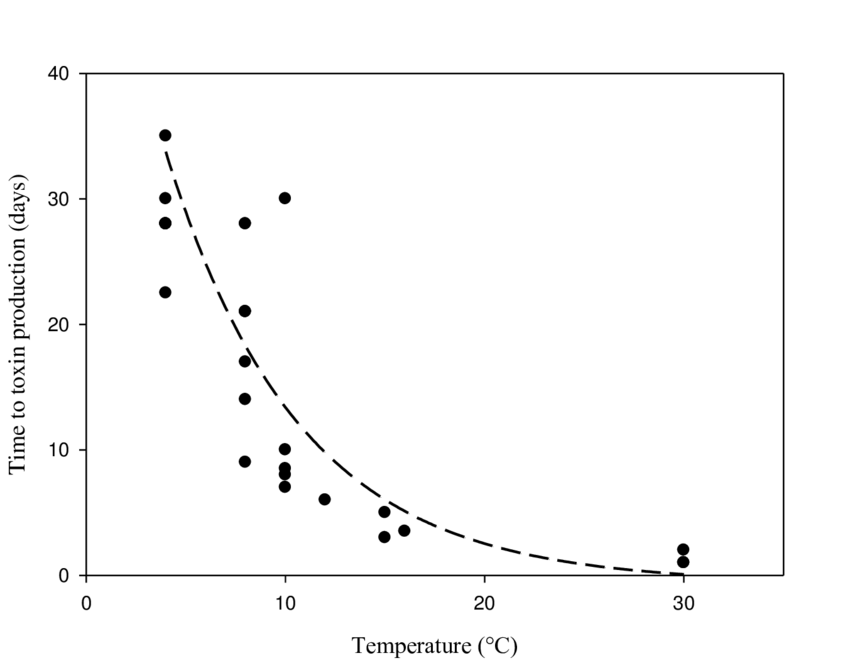 Not the answer you're looking for? Browse other questions tagged nutrition safety toxicology .

5
Can excessive intake of butter cause heart attacks at age 21?
9
Can riding a motorcycle without earplugs cause hearing damage?
39
Can eating too much sugar cause diabetes?
4
Can diet drinks cause multiple sclerosis-like symptoms?
7
Can eating too much fibre cause Hemorrhoidal disease (or piles)?
8
Can gluten cause depression?