In 1984, was the top income tax rate lowered from 70% to 28%,and was Social Security then taxed for the first time? 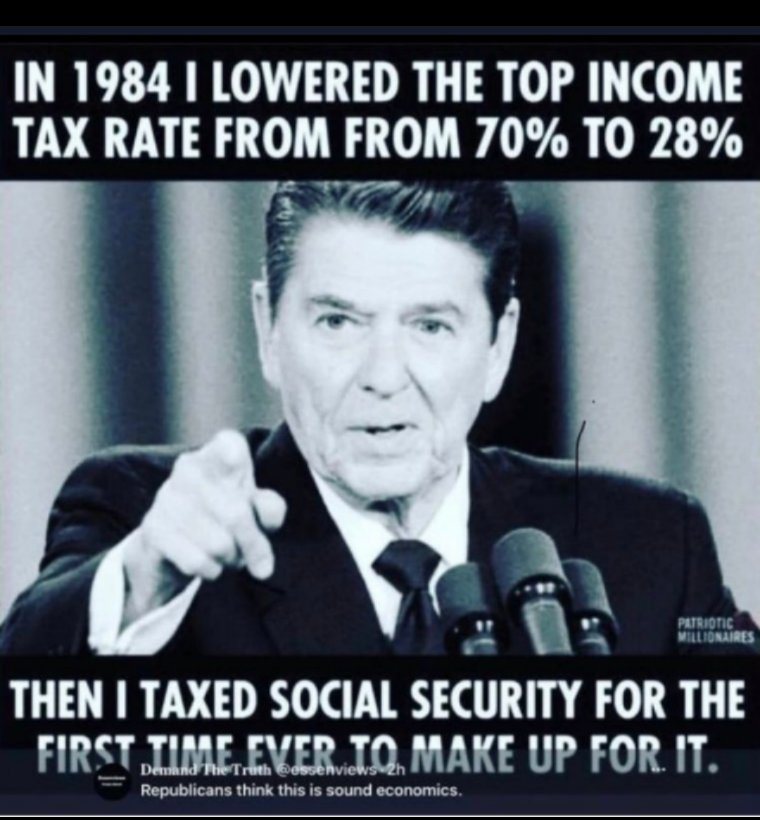 I saw this image on social media. There a few claims here that I'm curious about the accuracy of. Of course, the President can't unilaterally alter tax laws, but regardless, did these things happen?

Just a few additional references and context, to add to Joe W's answer:

While it is true that these things did happen during his presidency he was not the one responsible for them. All tax bills (which all of this was) start in the house of representatives, are approved by both chambers before being signed by the president. So while he might have signed the he required the help of congress for it to happen. When it comes to tax laws there is no one single person to blame.

All Bills for raising Revenue shall originate in the House of Representatives; but the Senate may propose or concur with Amendments as on other Bills.

Social security did however start getting taxed in 1984.

Not the answer you're looking for? Browse other questions tagged united-states government .

20
Was the 16th Amendment (income tax) improperly ratified?
18
Did Ehrlichman claim the reason for the Nixon drug war was to criminalize black people and hippies?
86
Was President Trump's inauguration "the first time ... that floor coverings have been used to protect the grass on the Mall"?
58
Can the US government garnish 100% of your income?
74
Did the maps for services such as Snapchat, CitiBike and StreetEasy label New York City as “Jewtropolis” for a brief amount of time?
11
Do rich Americans pay a lower portion of their income in federal taxes than the middle class?
9
Was Dr. Birx personally responsible for the decision to change the COVID-19 data reporting from the CDC to the HHS?
50
As of August 2020, was the weekly mortality rate in the US the lowest in a decade and the second lowest in the 21st century so far?
10
Was it ever common in the USA for women to use their husbands' Social Security Numbers as their own?