Is Trump's book, Our Journey Together, personally signed? 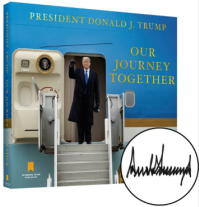 OUR JOURNEY TOGETHER (SIGNED COPY) $229.99
Get your hand-signed edition of Our Journey Together. Autographed by President Donald J. Trump, this photo book will become a family treasure! ...
45books.com, viewed 20 November 2021 (bold font added)

The signed copy was mentioned in well-known outlets such as Rolling Stone, Fox News, and The Seattle Times (among others).

I find it questionable that Trump would personally sign books for $155 (gross) mark-up given his alleged net worth of around $2.1 billion.

Are the signed copies of the book personally signed by Trump? Has an autopen machine been used to sign these copies?

PLEASE NOTE: PRESIDENT DONALD J. TRUMP WILL HAND SIGN BOOKPLATES FOR THESE BOOKS, HOWEVER WE ARE UNABLE TO PERSONALIZE OR ACCEPT SPECIAL MESSAGING REQUESTS.

Note that the traditional location for an author signature is the Title page of the book. So a slip-cover signing is already a second rate signature.

Due to my understanding of the logistics of book selling, the only times when pre-sold books and authors collide occur fit into two categories:

Other means of "getting the book signed" are generally used when the book is being signed as part of the initial purchase from the publisher:

This is why the book plates are being signed, they are being shipped independent of the books, and then shipped back to the books. That's a good sign, that the signature might be a "hand signed" signature; but the seller is very clear in their omission: the seller makes no claims of the means by which the signature is performed. In Trump's world, input of his signature into an auto open might be the"hand" part of the signing. I would imagine that a seller who wanted maximum impact would have the signature on the Title page, and having it on a sticker attached to the book makes it trivial to mass sign these, without the author and the book having been in the same room.

The images presented on the website do not favor a hand-signed advertisement (although they may be incorrect). Real ink pens tend to not be under the correct amount of pressure for the entire signature, and so they lack a "print quality" transfer on the strokes as seen in this signature. Note that the image in the circle is either using felt pen at an impressively even stroke pressure or is an image rendering of the signature in question.

That said, a signed book is usually not very valuable. They are usually worthless, unless the following is true:

Notice that rarity is driving value here. There is no rarity in a signature you can literally just buy from the publisher. There have been a number of rare book that have seen a decrease in value as their signatures have proven to be forgeries.

If it has a signed by the author sticker, 99% chance its worthless.

If its signed by a best selling modern author, 99% chance it's worthless.

If its a rare edition or a popular author who wasn't well sold when the book was released, then its probably worth something. As others have said, there are many variables into what makes it worth money.

Source: worked as a book buyer in the US's largest used book store for 5 years. Bought hundreds of rare signed copies for tens to hundreds of dollars. Passed on thousands of common signed copies.

Surprisingly, there are no pictures of the signed bookplate. Not even on collectable book sites, like https://premierecollectibles.com/. With that in mind, his "dustcover signed editions" of previous books featuring Trump typically demand $20 to $30 a copy. Not to fan partisan fires, but this pales in comparison to a limited run "special edition" print of a popular book (signed by a different president) at $1000 (discounted from $1250). So, I would argue that even signed in pen, in front of you, by Trump himself, on the book's Title page, it's not worth the price of the purchase, if he's likely to sign more than 1000 of them.