Was "their" a singular pronoun in English before the 16th century? 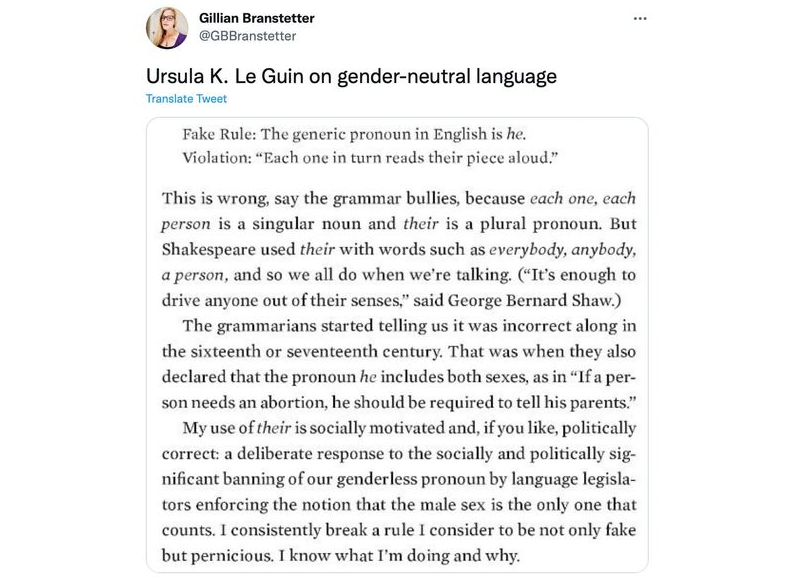 So, was "their" truly a genderless 3rd person singular pronoun prior to some change in the 16th/17th century?

This Wikipedia article indicates that the genderless 3rd person singular pronoun was "it" for early English.

I'd like a rigorous answer, preferable something peer reviewed, that explains the source of this claim, if indeed it is true.

Yes, from the OED blog:

The Oxford English Dictionary traces singular they back to 1375, where it appears in the medieval romance William and the Werewolf. Except for the old-style language of that poem, its use of singular they to refer to an unnamed person seems very modern. Here’s the Middle English version: ‘Hastely hiȝed eche . . . þei neyȝþed so neiȝh . . . þere william & his worþi lef were liand i-fere.’ In modern English, that’s: ‘Each man hurried . . . till they drew near . . . where William and his darling were lying together.’

Since forms may exist in speech long before they’re written down, it’s likely that singular they was common even before the late fourteenth century. That makes an old form even older.

There's a few more examples in the free OED entries for they and their, and even more in the MED under they 1a(e). (These are both well-regarded sources on historical English, with the OED often being regarded as the best.)

As for how common it was, there's no definitive answer. In The Rise of Epicene They, the author did a proximity search for pronouns following "each/every [noun]" (or similar) in The Canterbury Tales, and found that 18% of the time the pronoun that followed was "they", arguing that this is a good measure for English at the time and place it was written (early 15th century, or earlier if the scribe was faithful to the version being copied).

When did the prohibitions on singular they begin? Androcentrism in Prescriptive Grammar cites a 1746 grammar rule, which it says is "best viewed as an unusually early and very incipient form of the attack on singular 'they", and quotes another source from 1795 that calls out singular they as one of "many violations".

(Singular they isn't one grammatical feature; it is many. There is diversity in when each came into use, but this answer mainly provides evidence for one or two types. I will expand on the other types if I find a suitable source.)

I'm afraid I can't give you a peer-reviewed answer. However, the use of the singular "they" by Shakespeare is well documented.

NYUlocal's discussion of the Swedish "hen", also claims the singular "they" was used in The Canterbury Tales, Hamlet, Mansfield Park, and The Universal Declaration of Human Rights.

More to the point, in "A Comedy of Errors Shakespeare uses these lines:

And there's this from "The Rape of Lucrece":

Now leaden slumber with life's strength doth fight;
And every one to rest themselves betake,
Save thieves, and cares, and troubled minds, that wake.

The question could be answered by comparison of the King James Bible (1611 version) with the Wycliffe Bible (1382) but would require some considerable research.

Here are two examples I found myself, which indicate that 'they/their/them' was not used singularly prior to the 16th century:

1382 ech man in to his tabernaclis

Care would need to be taken in certain passages since the Wycliffe is translated from the Latin Vulgate whereas the KJV is translated from the Koine Greek text and the Masoretic Hebrew text but in these two examples above, the sense is the same, despite different source texts, and the comparison is valid in English.

The Oxford English Dictionary has traced the singular 'they' back to 1375 and 1450 but this does not suggest that it was common usage, only that it is seen in example:

a. With an antecedent that is grammatically singular, but refers collectively to the members of a group, or has universal reference (e.g. each person, everyone, nobody).

Sometimes, but not always, used to avoid having to specify the gender(s) of the individual(s) being referred to; cf. sense A. 2b.

Not the answer you're looking for? Browse other questions tagged united-states united-kingdom gender language linguistics .

27
Did Shakespeare introduce over 1700 new words to the English language?
25
Are there more English speaking people in China than in the USA?
48
Are there 20,000 English words in the average adult's vocabulary?
20
Was the 16th Amendment (income tax) improperly ratified?
19
Is the "I before E" English spelling rule wrong more than it is right?
15
Do 22% of Muslim women in the UK speak little or no English?
4
Did Francois Valentijn say that Malay language in 16th century was understood by even people living in Persia and beyond?
10
Do the English eat "pork" instead of "pig" because they were servants of the French?
151
Was pink a boy color and blue a girl color prior to the 20th century?
10
Was it ever common in the USA for women to use their husbands' Social Security Numbers as their own?