Do we unknowingly eat 5 grams of plastic per week?

I just saw a DW (Deutsche Welle the German public state own international broadcaster) short documentary on You-Tube named "How to avoid micro plastic in your food" and is about how much plastic we are eating. Please seek to time 3:46.

In that, it is explained that plastic in turn breaks in very small fragments called micro-plastic, which are less than 5mm in size.

This micro plastic in our oceans is consumed by sea creatures in turn reach our bodies through them, also we inhale tiny free plastic molecules in air through our breathing.

There is a claim in the video that we eat 5g of plastic per week, a weight equal to a credit card in such a ways.

Are we eating 5g of plastic per week through various ways knowingly or otherwise?

I think this is rather disputed. The 5g figure appears to have originated with Reuters Singapore based on an Australian study, and it's even pegged as a "conservatives estimate" therein.

On the other hand

researchers from Wageningen University & Research calculated that we ingest about 0.0041 mg microplastics particles a week (less than a grain of salt) and 12.3 mg in a lifetime.

i.e. that most people consume less than the equivalent of a salt crystal of plastics: 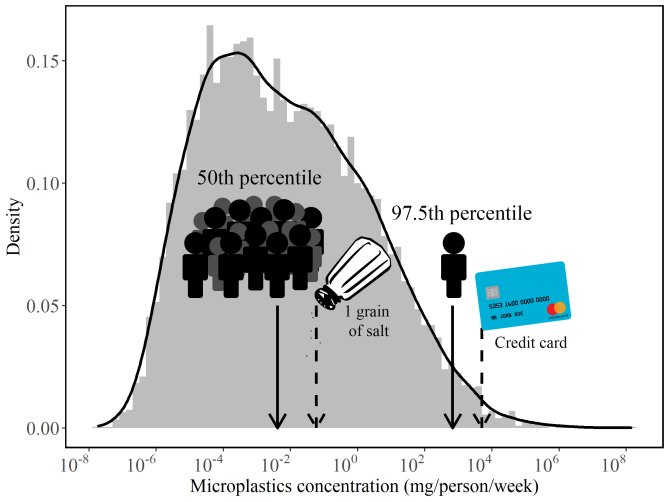 According to the abstract of the Dutch study that spurred that large graphic:

However, the modelling is rather involved, as it entails knowing the distribution of particles by weight etc. So I suspect there might not be agreement on this, in the literature.

According to the Canadian study found by Oddthinking, the largest single contributor appears to be bottled water (it has 22-times the plastic contents of tap water by particle count). That study says that Americans, on average, drink one 0.5L (well 0.436L) bottle of water per day, with the rest of water intake from other sources. Also

As Oddthinking notes, it's not really clear how to translate these into weights. Assuming the particle counts are remotely proportional with with the weight, that makes bottled water the largest contributor.

But a 0.5L plastic water bottle weights like 10 grams, so there would have to fairly large leaching (on the order of 5% by weight) to drink half of the mass of one container even a week if all water drank was from such bottles (14 liters = 28 bottles), and even more leaching would be needed if only one bottle per day was drank (American average), i.e. ~20% leaching.

Not the answer you're looking for? Browse other questions tagged environmental-health public-health plastic .

49
Does regularly drinking from a plastic container cause cancer?
7
Do the plastic shade balls in Los Angeles leach chemicals into water?
5
Does Daylight Savings Time lead to an increase in car accidents and work related injuries the week afterwards?
68
Is there plastic microfiber in 83% of tap water?
23
Are drinking straws a minor source of ocean plastic pollution?
113
Do 10 Asian and African rivers generate 90% of plastic trash in the ocean?
2
Is plastic significantly less likely to cause allergies than metal, paper, acrylic or bamboo