Did a cheetah refuse to race against dogs? 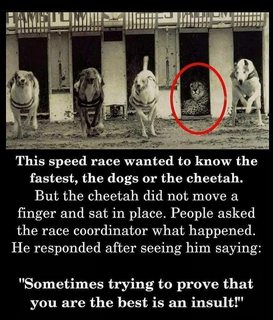 This speed race wanted to know the fastest, the dogs or the cheetah. But the cheetah did not move a finger and sat in place. People asked the race coordinator what happened. He responded after seeing him saying:

"Sometimes trying to prove that you are the best is an insult!"

Is this a photograph of a race where a cheetah refused to race against dogs?

Snopes explains it is from an advert from Audi: 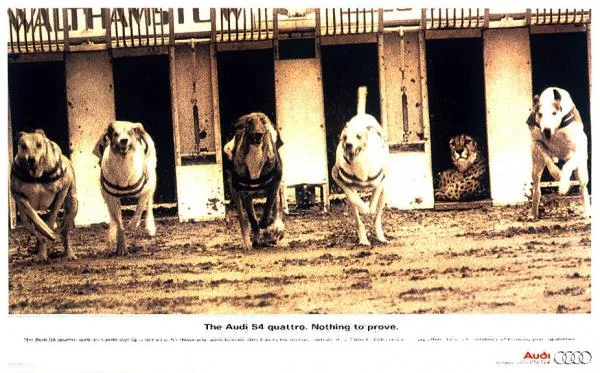 Snopes references a broken link for its source. Here is an equivalent. It names the photographer, Simon Mooney.

Not the answer you're looking for? Browse other questions tagged zoology sport .

43
Is chocolate bad for dogs?
15
Do dogs commit suicide at Overtoun Bridge?
20
Why do cats and dogs fight?
24
Can dogs smell fear?
27
Did rescue St. Bernard dogs carry barrels of brandy around their necks?
25
Do water bottles on sidewalk/corners prevent dogs/cats from peeing?
16
Can dogs detect human cancer?
7
Do small dogs live longer than large dogs?
13
Do prairie dogs die when they eat bubblegum?
3
Are dogs excellent wingmen?