Is the UK lorry driver shortage unrelated to Brexit? Do EU countries have equal or greater shortages?

UK Transport Secretary Grant Shapps claims that Brexit is not one of the causes of the UK lorry driver shortage which is causing shortages of food in supermarkets and shortages of fuel in petrol stations.

(Accepting that the driver shortages likely have more than one cause and that Covid is likely to be a contributing factor).

He claims that countries within the EU have their own driver shortages which are equal to or greater than those in the UK. Is this true?

Asked about the role of Brexit in the driver crisis, he said EU countries such as Poland and Germany had “very large and even larger” shortages.

“I’ve seen people point to Brexit as the culprit here; in fact, they are wrong,” he said. “Because of Brexit, I’ve been able to change the law and alter the way our driving tests are taken in a way I could not have done if we were still part of the EU. Brexit has actually provided part of the solution.”

As of today, it doesn't appear to be the case that Germany is suffering from a similar fuel shortage as the UK, and it's not affected by a "driver crisis" as severe as the one in the UK. This contradicts what Grant Shapps claimed on September 24. Apart from my daily experience in Germany, I'm basing this argument on reputable German newspapers who report on the UK crisis as an unusual event.

However, Shapps may still have a point when he says that the shortage is not only caused by Brexit. For instance, German newspaper Die Zeit points out in a recent analysis that there are additional causes, and warn that Germany may be affected in the near future as well:

The driver shortage [in the UK] isn't just affecting gas stations. It is also leaving supermarket shelves empty. It's true that this has to do with Brexit, because foreign drivers without residence permits had to leave the country after it left the EU. But the problem actually lies deeper.

According to their analysis, German transport companies are already understaffed. While the UK is requiring about 100,000 additional truck drivers, there is a need for between 45.000 and 60.000 drivers in Germany as well. The article states that the shortage is due to changes in the overall demography of Germany, the general unattractiveness of the job, the abolition of obligatory military service in 2011 (recruits used to be able to acquire a driving license for trucks in the military), and fierce competition by drivers from other EU countries with lower wages.

The German magazine Focus published a similar analysis, citing a transport company representative who warns that conditions like in the UK are not impossible in Germany as well:

"The shortage of drivers will mean that conditions like those in the UK cannot be ruled out here either. We are currently compensating for the shortage with drivers from abroad, but in Poland, for example, wages are now so good that working in Germany is no longer so attractive for drivers. And there is a shortage of young talent. In my freight forwarding company, for example, I normally have four trainees per year - currently there is only one."

German public-service broadcaster ZDF similarly acknowledges a driver shortage in Germany. According to their figures, there is about a million active German truck drivers, and an annual need of an additional 20,000 drivers to compensate for retiring or quitting personnel. Yet, their article quotes industry representatives who emphasize that the situation in Germany is still very different from the UK.

At the moment, we are far away from a restriction of the basic supply, as is currently the case in Great Britain, emphasizes the German Freight Forwarding and Logistics Association (DSLV). In the long term, however, the profession must become more attractive so that no supply bottlenecks occur in the future.

To summarize: As far as Germany is concerned there is no fuel shortage, unlike in the UK. If Grant Shapps claims that EU countries such as Poland and Germany had very large and even larger shortages, this claim is not true at least for Germany. However, other EU countries including Germany do see a shortage in truck drivers which may cause interruptions of the supply chains in the future. Brexit, then, may indeed not be the only culprit for the current situation in the UK – although closing the job market to drivers from the EU will without a doubt have contributed to it.

I suppose it depends whose figure you want to cite. DW writes:

Poland is currently short of around 124,000 drivers, or 37% of its required workforce, according to a recent report by TI Insight.

It's a bit unclear to me if the two reports use the same methodology to derive those shortage figures though.

I've managed to locate that TI source. They indeed have Poland above the UK and the latter above Germany, but the estimates are at most for 2020. 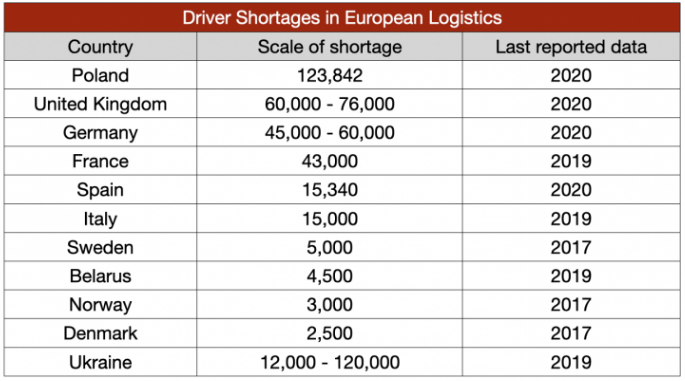 Amusingly enough, Shapps has actually quoted those (TI) figures, only slightly off for Poland and choosing the top value for Germany... but he didn't seem to mention any concrete figure for the UK:

“We’ve got, for example, in Germany a 60,000 shortage and Poland a 123,000 shortage of lorry drivers, so as I say it is the principal cause of the problem and we are working very hard to change it, including changing the law in order to provide more tests for HGV drivers and encouraging people back into the market.

Politico put it in different (percentage) terms and from yet another data source:

There's a more recent IRU survey, which alas doesn't cover the UK. But looking at the latter survey, one has to be pretty careful at which point in time one makes the comparison, due to large variation in relation to the pandemic:

driver shortage was less serious in 2020 than 2019 due to the pandemic. In Europe, unfilled driver positions fell by around three quarters, from 20% to 5% for bus and coach drivers and from 24% to 7% for truck drivers.

Transport companies however forecast driver shortages to intensify again in 2021 as economies recover and demand for transport services increases. European companies are expecting a 17% shortfall in drivers this year. This shortfall is expected to reach 18% in Mexico, 20% in Turkey, 24% in Russia, and almost one third in Uzbekistan.

Finally, on the question whether the UK driver shortages were aggravated by Brexit, the BBC has this survey, posted on 27 September: 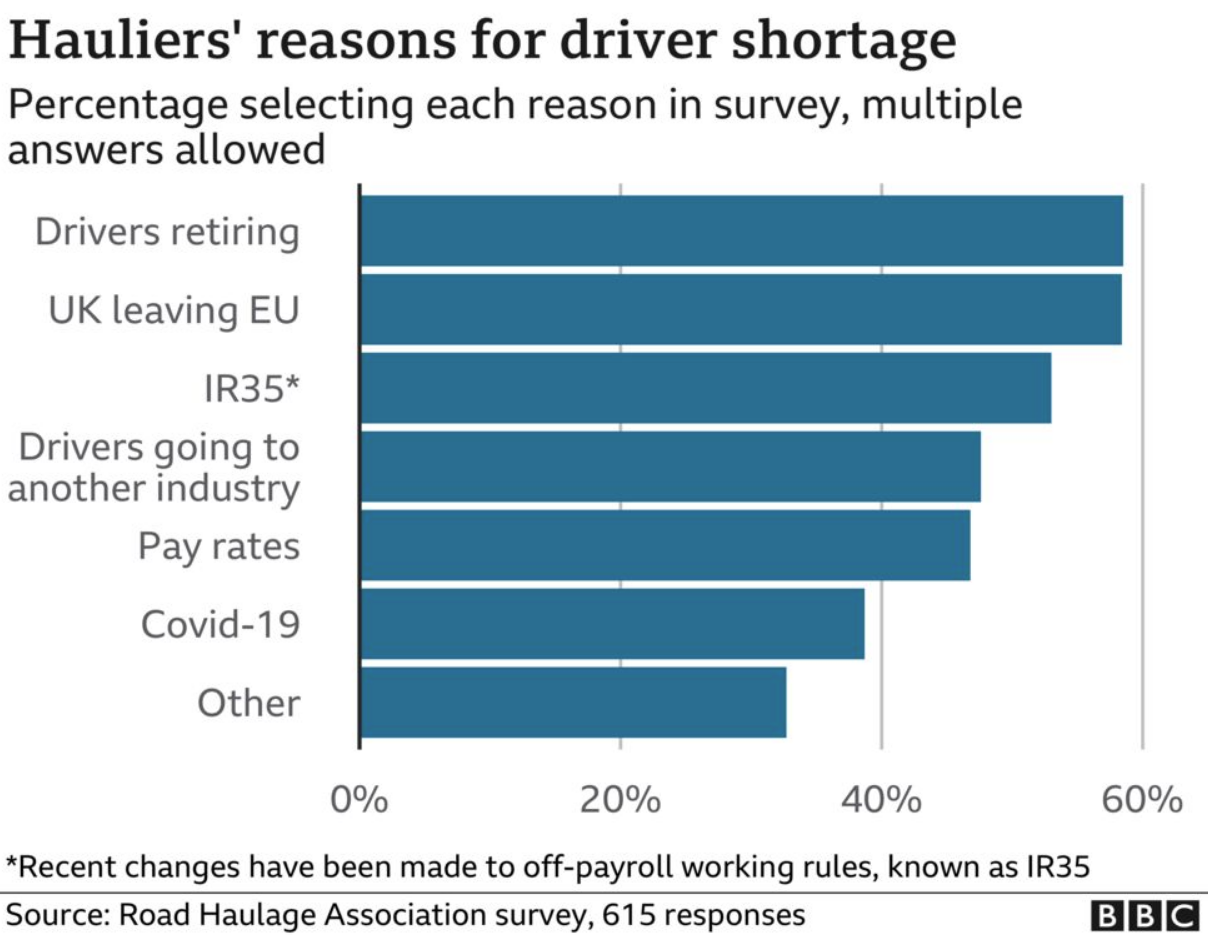 Brexit is given as a top reason in responses, together with drivers retiring.

A Road Haulage Association (RHA) survey of its members estimates there is now a shortage of more than 100,000 qualified drivers in the UK. [...]

Even before Covid, the overall estimated shortage was about 60,000 drivers.

However, ONS data cited in The Grocer (on 19 Sep) seems to contradict that level of impact of Brexit, at least via EU drivers:

That loss of 12,500 drivers only goes a little way to explaining the current shortfall. Given a total of almost 70,000 HGV drivers left during the pandemic alone, this represents just 18% of those who exiting.

It led a logistics thinktank led by Driver Require to conclude “EU drivers leaving the UK did not significantly contribute to the current shortage”, in a new report published this week.

Still, this 18% is not 0%. And offering 5,000 visas to foreign drivers is an implicit admission that whatever streamlining of licensing/recruiting thanks to Brexit (as Shapps says happened) wasn't enough to fix the driver shortage, at least in the short term.

Unfortunately, it's difficult to say what demand changes occurred in the same time frame elsewhere in Europe as the data from TI for example is taken at different points in time and the IRU doesn't constantly survey the UK for some reason.

Regarding the UK fuel shortage, the immediate trigger appears to have been panic buying: 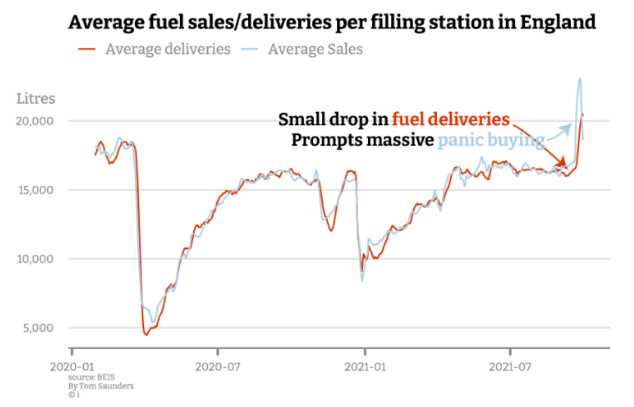 In the run-up to the fuel shortage, deliveries did fall in England although only marginally. At the start of September, fuel deliveries fell by around 200 litres per filling station on average.

This mismatch barely registers when comparing supply and demand earlier in the year, when far larger mismatches occurred.

However, as more people became aware of the shortage, panic-buying of fuel increased rapidly. Just several weeks after the initial fall in supply, sales of petrol skyrocketed.

According to the BBC, the sudden spike in demand appears to have been triggered by an announcement about driver shortages though, so the issues are related at least on that level:

On 23 September, BP warned it would have to "temporarily" close a handful of its petrol stations, because of a lack of drivers.

Long queues started to build up outside stations across Great Britain in the following days, amid fears that fuel might run out.

I haven't looked at the UK food issues in any great detail, but I recall reading some complicated stories about e.g. CO2 shortages affecting the packaging used in the industry. So shortages may have been due to Brexit in some way but not mediated by truck driver shortages. The same story mentioned lack of workers in meat production as a "result of labor shortages tied to Brexit and the pandemic", but not clear how much due which cause. (Besides driver visas, the UK government also announced 5,500 visas for poultry workers.)

I do see that some companies like McDonald's directly blamed the driver shortage as one of the factors for shortage of some of their products, like milk shakes, in the UK.

17
Do Europeans have a greater chance of making it into the top 1% of income earners than Americans?