Is the size of the territory of a country purely random? [closed]

Ask Question
Asked 8 months ago
Modified 8 months ago
Viewed 524 times
-3
Closed. This question needs details or clarity. It is not currently accepting answers.

I read a blog post that attempts to show that the size of the territory of a country is purely random and therefore bears no major historical significance.

The argumentation (simplified a bit) is as follows: 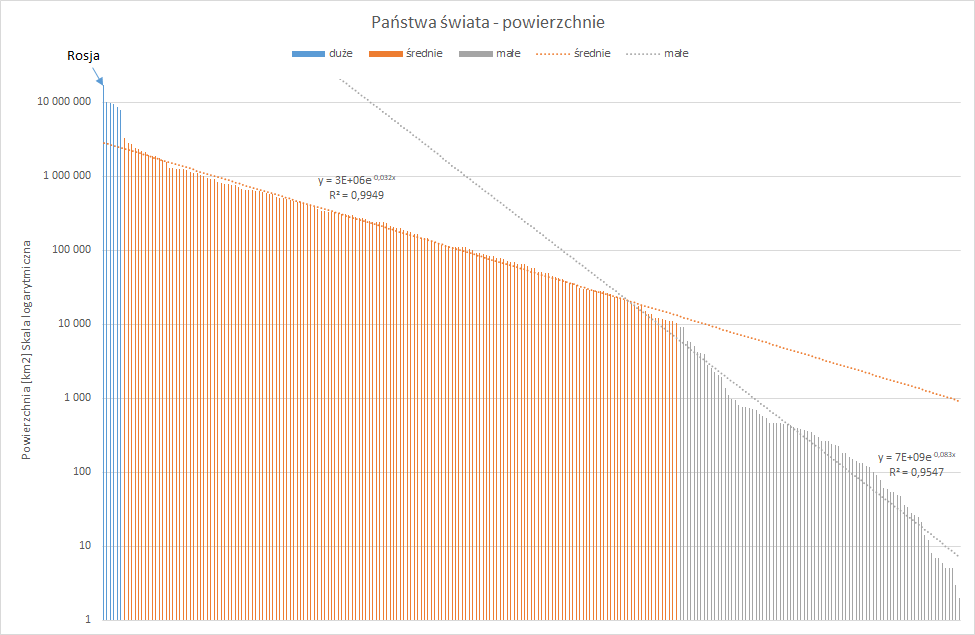 (Each bar is a country, the Y axis is the size of countries in km2; blue bars are "large" countries, orange bars are "medium" countries and grey bars are "small" countries. Countries are labelled "large", "medium" or "small" because, according to the blogger, the exponential distribution has different arguments depending on whether the country is below or above 10000 km2, so in fact there are two distributions, as shown by the straight lines in the plot)

This seems to make sense, but... at the same time it is very counteintuitive. Does it follow that a country competently governed is equally likely to lose a territory than a failed country? The blogger himself says this is not the case, but he claims that a country that is governed competently is likely to be governed far worse after a few generations and will start losing territory. One very profound conclusion after another...

Plus, the blogger himself claims that his findings are contrary to established knowledge.

Is it purely random if a country gains or loses a territory?

The conclusion of the linked blog post says (via Google Translate):

Contrary to popular belief, no "natural boundaries" exist. All borders between states, with the exception of really great countries, which occupy a large part or even the whole (Australia) of continents, are purely random.

NASA talks about this in: When Rivers are Borders

Rivers also serve as borders in several African countries: Benin, Nigeria, Senegal, Mauritania, and Niger in West Africa; the Central African Republic, the Democratic Republic of the Congo, Tanzania, and Mozambique in Central Africa; and Botswana, Zambia, Zimbabwe, and Namibia in Southern Africa. In Europe, Spain, Portugal, France, Germany, Poland, Norway, Bosnia, Romania, and Ukraine are just some of the many countries with international border rivers.

The patterns are not random. Smith explained that the continents where European powers established colonies and exerted great influence tend to have more borders defined by rivers because European explorers, cartographers, politicians, and diplomats found rivers to be a convenient way to divide territories. Asia, in contrast, has fewer river borders than other continents (16 percent) because European influence and colonialism was more limited. The exception is South Asia, where Great Britain and France remained colonial powers into the 20th century.

Which shows that the blog's assertion is nonsense.

Not the answer you're looking for? Browse other questions tagged politics mathematics .

2
Did Grothendieck reinvent the Lebesgue integral?
35
Is this map of Israel-occupied territory accurate?
28
Is the US the only country where anyone can declare their own candidacy for president?
59
Are 41% of Donald Trump supporters in favor of bombing Agrabah (the country from Aladdin)?
67
Did Donald Trump say republicans are the dumbest voters in the country?
9
Has Google Maps represented Palestine as a country in the past?
91
Was Morocco the first country to recognize USA?
16
Did Lenin say "destroy the family, you destroy the country", and if so in what context?