Does Norway spend $29,726 on child care per toddler annually?

I would like to verify the following chart (e.g. take Norway) in a New York Times article: 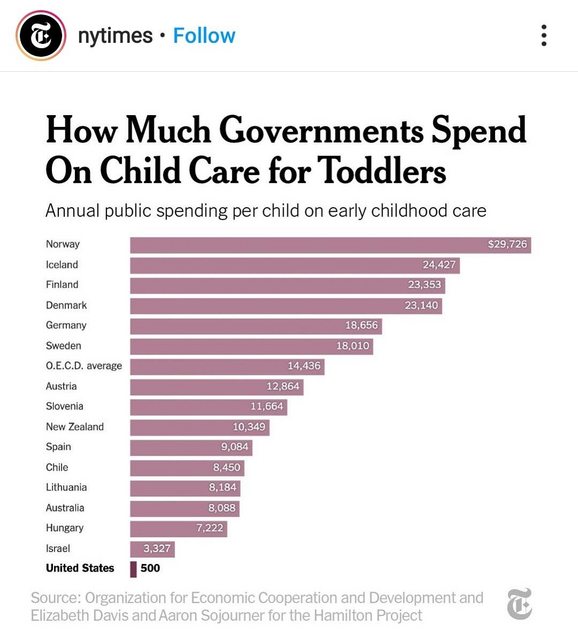 (Note that multiple references in the article appear to define a toddler as being 0-2 years of age. They say "Denmark, for example, spends $23,140 annually per child on care for children 2 and under," which matches their graph.)

Looking through OECD links and searching their website, I found this OECD article updated September 2021: 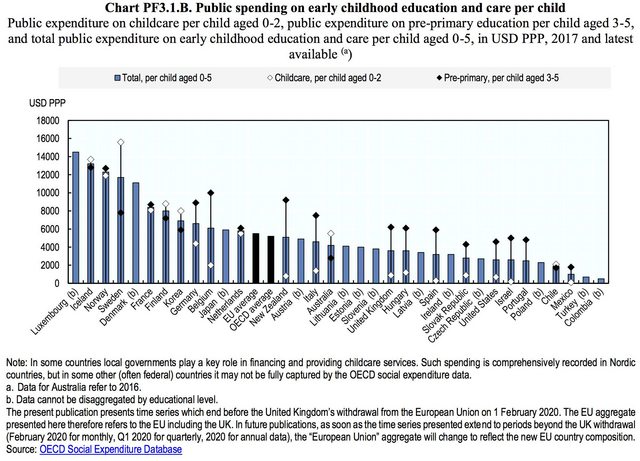 The graph says Norway spends $11,900 PPP adjusted on child care per toddler (an excel file can be downloaded from the article for the exact numbers on the graph).

There is no reason for this $11,900 statistic to substantially disagree with the NYT's $29,726 except if the units disagree. The NYT could be using nominal instead of PPP adjusted dollars, and they could define children differently (e.g. is it per child enrolled or just living in the country). Neither of these explanations seem to work.

The enrollment rate interpretation does not work because it balloons the US number into the few thousands.

The reasoning in the article suggests they might have used spending as a percent of GDP to somehow get their number. However, I can't find the relevant calculations anywhere, e.g. at The Hamilton Project mentioned in their chart's source. Given the $11,900 PPP per child statistic directly from the OECD, I can't see how the NYT chart could possibly be correct?

Is anyone able to verify the $29,726 number or show how the NYT's calculated it--and comment on its correctness?

(Ideally, this verification would be based on OECD sources since that's the source in the NYT graphic. Of course, any answers that might shed light are welcome.)

Following the Organisation for Economic Cooperation and Development (OECD) links in the story, these numbers appear to be not generated by the New York Times, but straight from OECD's "Indicator B2. How do early childhood education systems differ around the world?" 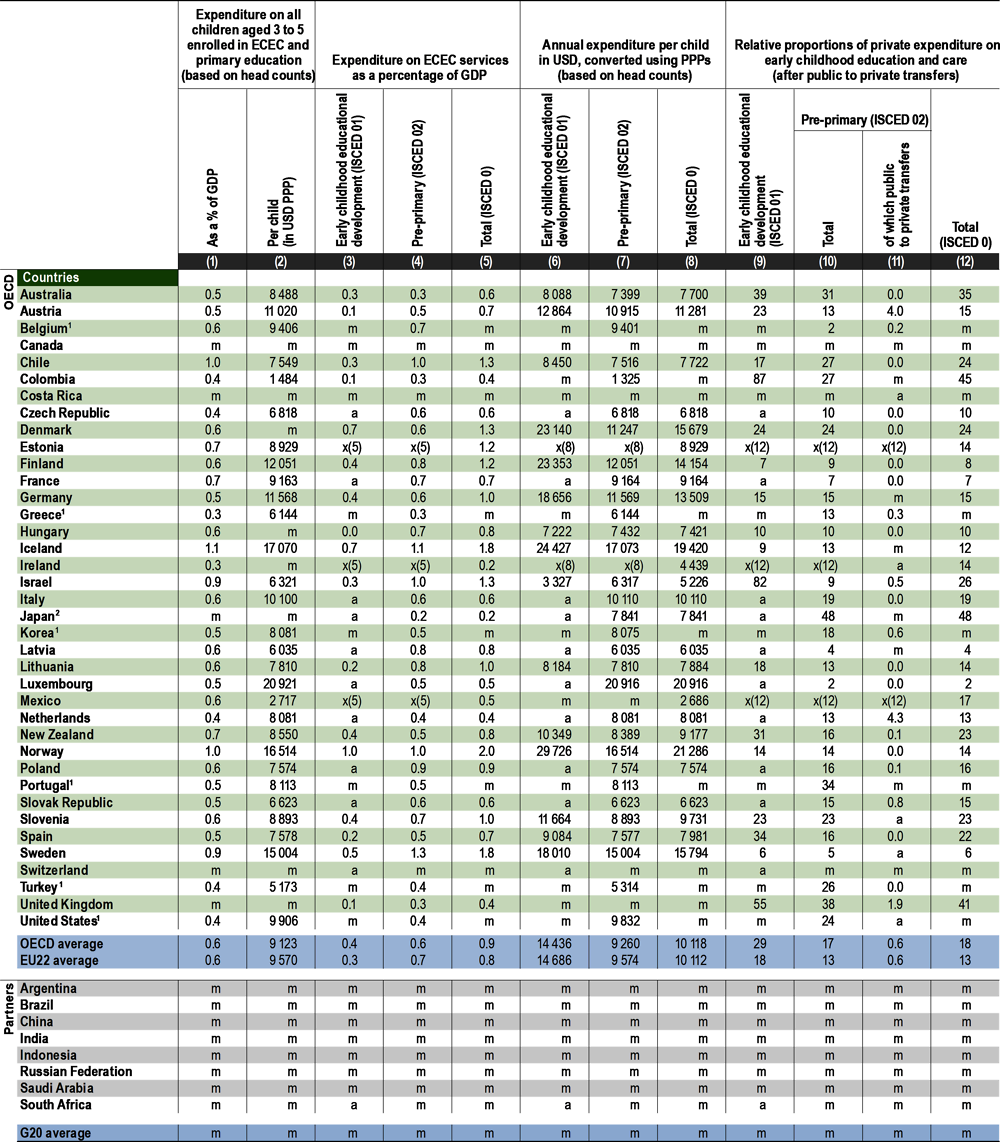 OECD's methodology for deriving those numbers is explained in "ANNEX 3: SOURCES, METHODS AND TECHNICAL NOTES" of Education at a Glance 2021, which credits some Norway-specific figures to Statistics Norway.

As I suspect this is your real question, the NYT graph appears flawed as a USA vs Norway comparison in the following sense:

ISCED 01 refers to early childhood educational development services, typically aimed at children under age 3. The learning environment is visually stimulating, and the language is rich and fosters self-expression, with an emphasis on language acquisition and the use of language for meaningful communication. There are opportunities for active play so that children can exercise their co-ordination and motor skills under supervision and in interaction with staff.

The concepts used to define full-time and part-time participation at other ISCED levels, such as study load, child participation, and the academic value or progress that the study represents, are not easily applicable to ISCED level 0. In addition, the number of daily or weekly hours that represent typical full-time enrolment in an education programme at ISCED level 0 varies widely between countries. Because of this, full-time equivalents cannot be calculated for ISCED level 0 programmes in the same way as for other ISCED levels. For data-reporting purposes, countries separate ISCED level 0 data into ISCED 01 and ISCED 02 by age only, as follows: data from age-integrated programmes designed to include children younger and older than 3 are allocated to levels 01 and 02 according to the age of the children. This may involve the estimation of expenditure and personnel at levels 01 and 02. For more information, see the OECD Handbook for Internationally Comparative Education Statistics (OECD, 2018[16]) and Annex 3 for country-specific notes (https://www.oecd.org/education/education-at-a-glance/EAG2021_Annex3_ChapterB.pdf).

My TLDR conclusions from the answers are that: Norway (government and private) spends $29,726 PPP adjusted on child care per enrolled toddler annually. This applies to all other countries with entries in Table B2.3, which notably does not include the US. The US number appears to be government spending per toddler (not necessarily enrolled).

It should be emphasized that the gist of the chart/article is obviously true: the US government spends dramatically less than other OECD countries on toddler care.

Thanks to @jeffronicus for finding OECD Table B2.3 with the numbers in the NYT chart. @Fizz provides good analysis of the table and the chart.

Not the answer you're looking for? Browse other questions tagged economics education children .

11
Does US Congress cost $30m per day to run?
15
Are there 40,000 children of same-sex couples in California?
18
Does the Australian government spend more on welfare than on defense?
12
Does the US spend more on prisons than public education?
10
Does a child die from malaria every two minutes?
40
Does banning fictional portrayal of child abuse reduce actual child abuse?
1
Does Congress appropriate 300 billion annually to agencies which cannot legally receive appropriations?
11
Does having one fewer child reduce my carbon footprint as much as 71+ people going vegan?