Is seemingly bare-hands surgery (with no instruments) fake?

I have seen a video about surgery without surgical instruments, which can be seen here: 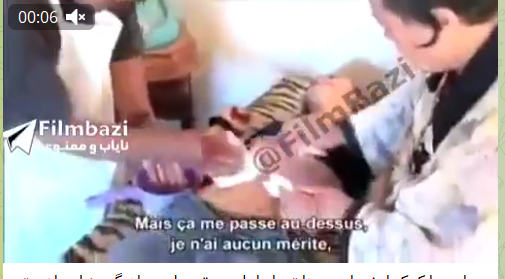 I found nothing about that Brazilian surgery (link), so I asked here to have some answer or comment about the accuracy of this video and to understand how it could be faked (like made by deepfake, etc.)

Your video is an example of what is known as psychic surgery. The practioners claim to be able to treat and heal many diseases.

Psychic surgery is a fake. It does not heal anything. Its practitioners are frauds, taking money from desperate people with incurable diseases.

The bits and pieces apparently removed from the patient's body are all animal parts.

It is nothing but stage magic. There are no special effects or high tech trickery going on. Nothing but misdirection and sleight of hand.

The practioners pretend to be digging into the patient's body while in fact pulling out pieces of animal flesh or organs that they have hidden in their hands.

The United States Federal Trade Commission at one time (October, 1975) had to go to the extreme of forbidding (some) travel agencies from arranging trips to the Philippine islands for psychic surgery - a good many people with incurable diseases were being taken on tours to the Philippines to be "treated" by psychic surgeons who did nothing to heal them but did charge large amounts of money for fakery.

This article from The New York Times from October, 1975 tells you about it.

The Federal Trade Commission today ordered four West Coast travel agencies to stop promoting psychic surgery tours to the Philippines and told the agencies to warn hundreds of patients who had gone there that the hoped‐for miracle cure was a “total hoax.”

Psychic surgery involves “operations” that leave no scars. Psychic surgeons knead patients’ flesh and then hold up a piece of tissue they say is diseased and that they removed from the patient's body.

Testimony before an F.T.C law judge disclosed that the tissue is made of animal parts purchased at Philippine markets.

"Deep fake" via manipulation of video material was not possible back then. It wasn't needed, either. The tricks of a stage magician were (and still are) sufficient to carry apparent psychic surgery.

James Randi was a stage magician who used his skills to debunk many frauds. He replicated the appearance of psychic surgery on a live TV show in the United States, as well as on a show for the BBC.

The video in the question is more of the same. Faked by sleight of hand, though from the description it is in Brazil rather than the Philippines.

Fraud is fraud, though, no matter where the practitioners are located.

In this scene, James Randi is stuffing a piece back in after "accidentally" removing too much: 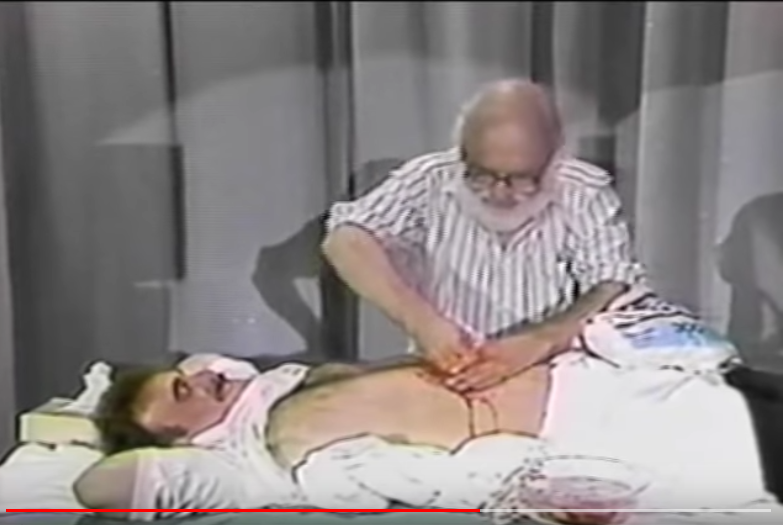 As mentioned by Brian in the comments, you can find YouTube videos showing how to perform psychic surgery using stage magician tricks.

This video goes from preparation to carrying out the performance.

In this scene, they are showing how to hold a packet of fake blood: 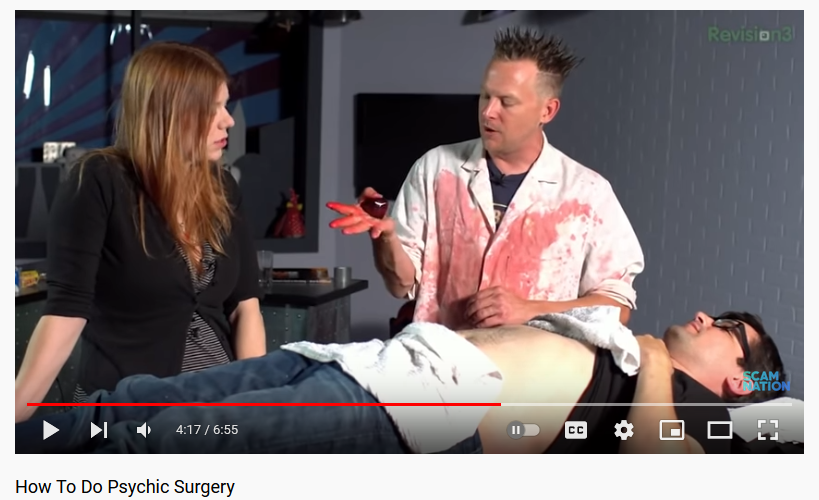 The packet is held between the thumb and the palm. When the hand is rotated so that the audience can only see the back of the hand, the packet is completely hidden behind the hand: 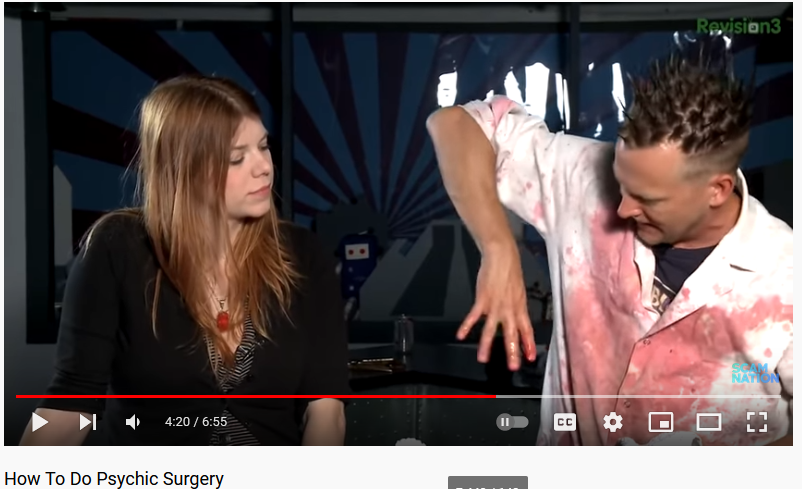 Not the answer you're looking for? Browse other questions tagged medical-science alternative-medicine brazil .

10
Is non-ionizing radiation known to cause any health issues?
17
Did Richard Nixon commission a study on the effects of THC and then have the results classified?
6
Can the size and shape of penis be enhanced permanently?
7
Has a finger grown back with ECM?
9
Does this video show a conscious man missing part of his skull?
5
Can surgical masks be sanitized and safely reused?
9
Will homemade facemasks using vacuum bag filters cause lung irritation?
0
Does Steve G. Jones have the title "Dr"?