Are people with a PhD least likely to be vaccinated in the US?

According to Unherd's summary of a CMU study

[Title:] The most vaccine-hesitant group of all? PhDs 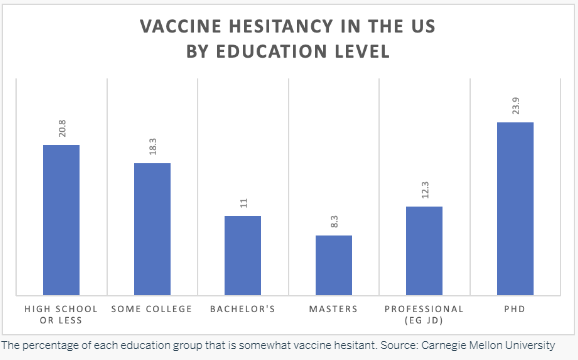 The National Review also reproduced the graph above, with even fewer details.

I suspect the study only concerned Covid-19 vaccines, but that's not too clear in Unherd's take. So is this a true relationship in general (between PhDs and vaccines in the US), or particular to one specific period and vaccine?

As a "sanity check" I looked for surveys inside universities, and found one, which doesn't quite match those findings above that supposedly was using a nation-wide representative sample. In this Wayne State survey, graduate students and post-docs had less hesitancy than undergraduates, and faculty had even less than both: 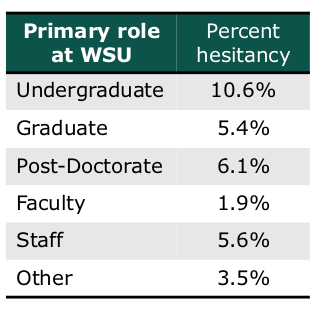 Granted industry-working PhDs would not be capture in the latter. There's also the issue that a university faculty is substantially older than students.

The graph accurately represents the survey result but the survey cannot be taken as an accurate representation of the true position.

If you follow the link to the paper that Unherd has you'll see the following data on page 17:

The data itself came from an online survey via Facebook:

This analysis used the COVID Trends and Impact Survey (CTIS)9, created by the Delphi Group at Carnegie Mellon University (CMU) and conducted in collaboration with Facebook Data for Good.

It appears they've used a subset of the data for their paper (as a side note the January 6th start date does coincide with an update made to the survey):

The analysis sample includes 5,121,436 survey responses from participants who completed the survey at least once January 6 to May 31, 2021

The survey itself does have some published limitations. Looking through those, there are two caveats I find noteworthy. The first is the second sample limitation:

Non-response bias. Only a small fraction of invited users choose to take the survey when they are invited. If their decision on whether to take the survey is random, this is not a problem. However, their decision to take the survey may be correlated with other factors—such as their level of concern about COVID-19 or their trust of academic researchers. If that is the case, the sample will disproportionately contain people with certain attitudes and beliefs. This implies the potential for the sample to be unrepresentative of the US population as all self-selected surveys inevitable are.

The second caveat is from the section about response behavior:

While less than 1% of respondents opt to self-describe their own gender, a large percentage of respondents who do choose that option provide a description that is actually a protest against the question or the survey; for example, making trans-phobic comments or reporting their gender identification as “Attack Helicopter”. Additionally, these respondents disproportionately select specific demographic groups, such as having a PhD, being over age 75, and being Hispanic, all at rates far exceeding their overall presence in the US population, suggesting that people who want to disrupt the survey also pick on specific groups to troll.

The first caveat indicates an unknown level of reliability about the views of the population, while the second indicates that the responses are clearly not representative. Because PhDs make up around 2% of the sample size, having even "less than 1% of respondents" attempt to disrupt the data for PhDs means we cannot be confident about the accuracy of such data as representing the population. As such we need to take the data for PhDs with a major grain of salt. It could still be useful to look at the data for PhDs over time, but any comparison with other groups cannot be trusted without further studies being done that reach the same conclusions.

A truly trustworthy analysis would need to randomly sample the population as self-selecting surveys can be very, very unrepresentative.

The survey has more than 98% non-response. What we're seeing here is selection bias: people who (claim to) have a PhD and are FaceBook users and responded to this survey are not representative of PhDs in general.

Taking the survey is voluntary, and only 1-2% of those users who are invited actually take the survey.

(This fact is mentioned in the middle of Rob Watts's answer. But I think it should be the headline. You shouldn't take a survey seriously with such a low quality sample.)

For easy reference, I'll repeat the links given in Rob Watts's answer: limitations of the survey and response behaviour.

I'll add here that while the data is in the paper, the bar graph from UnHerd is not. The paper has this line graph instead: 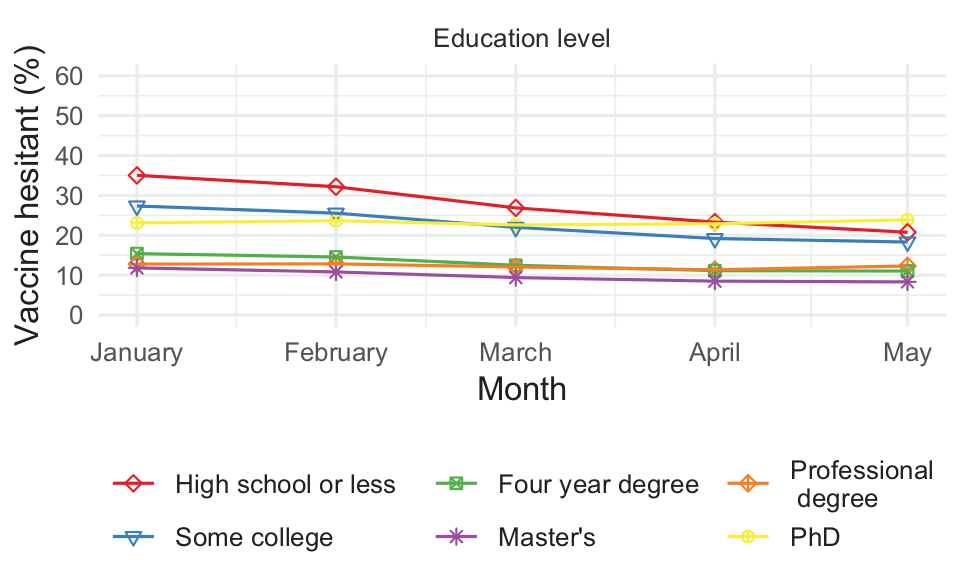 Indeed in May 2021 their data points to PhDs having the highest hesitancy, subject to the limitations of their study. (From Jan to April however, the "high school or less" topped the chart or at least tied the PhD line.)

Also, one of the paper's authors did talk about that to the press a bit later:

But some of their work appears to be misrepresented online, missing the overall point that hesitancy dropped.

“There are people that can kind of take a data point and twist it around to mean something that it doesn’t mean, and that’s unfortunate,” King said.

A sensitivity analysis found some people answered in the extreme ends of some demographic categories to throw off some of the numbers. King said it appeared to be a “concerted effort” that “did make the hesitancy prevalence in the Ph.D. group look higher than it really is.”

For example, they observed higher hesitancy rates than expected in the oldest age group — 75 and over — as well as the top end in terms of education level.

“We found that people basically used it to write in political … statements,” King said. “So they weren’t genuine responses. They didn’t really complete the survey in good faith.” [...]

People taking the survey were on the honor system, with no way to make sure people who claimed to have Ph.D. degrees actually have them.

And the Ph.D. group does not include medical doctors or nurses.

“So it’s not representative of the medical profession,” King said.

Regarding the age issue mentioned in the quote, there is indeed this odd data point in the paper's charts where 75+ y.o. Hispanics have much, much higher hesitancy than either Whites or Blacks of the same age... 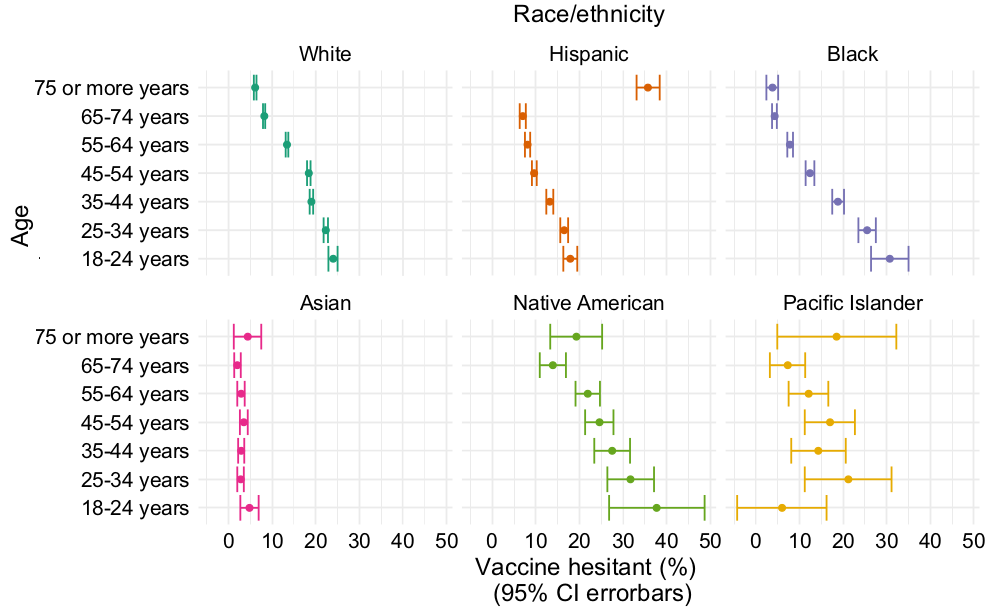 The question as given in the titled is broader in its inferences than the evidence presented in the question body. Indeed, it gets quite fuzzy when the broad statement in the title rests on a self-selection bias prone survey, and it doesn't help either when most people do not stop inferring and take the character combination "PhD" to halo-effect mean "intelligent people".

The gist of what's transported in the question title:

Q: Are people with a PhD least likely to be vaccinated in the US?

however is corroborated in other studies:

To summarise that adequately, we see that those who say "no, thanks for nothing" — among those trained in medicine — look out for 'vaccine' safety, take the all too common side effects seriously, and are those who have knowledge about COVID-19 vaccines, training related to COVID-19 vaccines, and again: education level. And that's a match.

Not the answer you're looking for? Browse other questions tagged united-states education vaccines .

43
Is the number of childhood vaccines correlated with infant mortality?
24
Was SIDS unheard of before "modern vaccine schedules"?
33
In the USA, are there more African American men in prison than in college?
16
Is the level of support for evolution decreasing in Europe?
52
Do people with flu shots shed the influenza virus more than those who aren't vaccinated?
13
Does flu vaccine make us more vulnerable to COVID-19?
45
Are unusually many people dying after being vaccinated for COVID-19?