Did a turkish man invent a steam engine 200 years before the industrial revolution and only made it to spin doner kebab? [closed]

Ask Question
Asked 3 months ago
Active 3 months ago
Viewed 7k times
14
Closed. This question is off-topic. It is not currently accepting answers.

I've seen this picture being reposted in many different places recently: 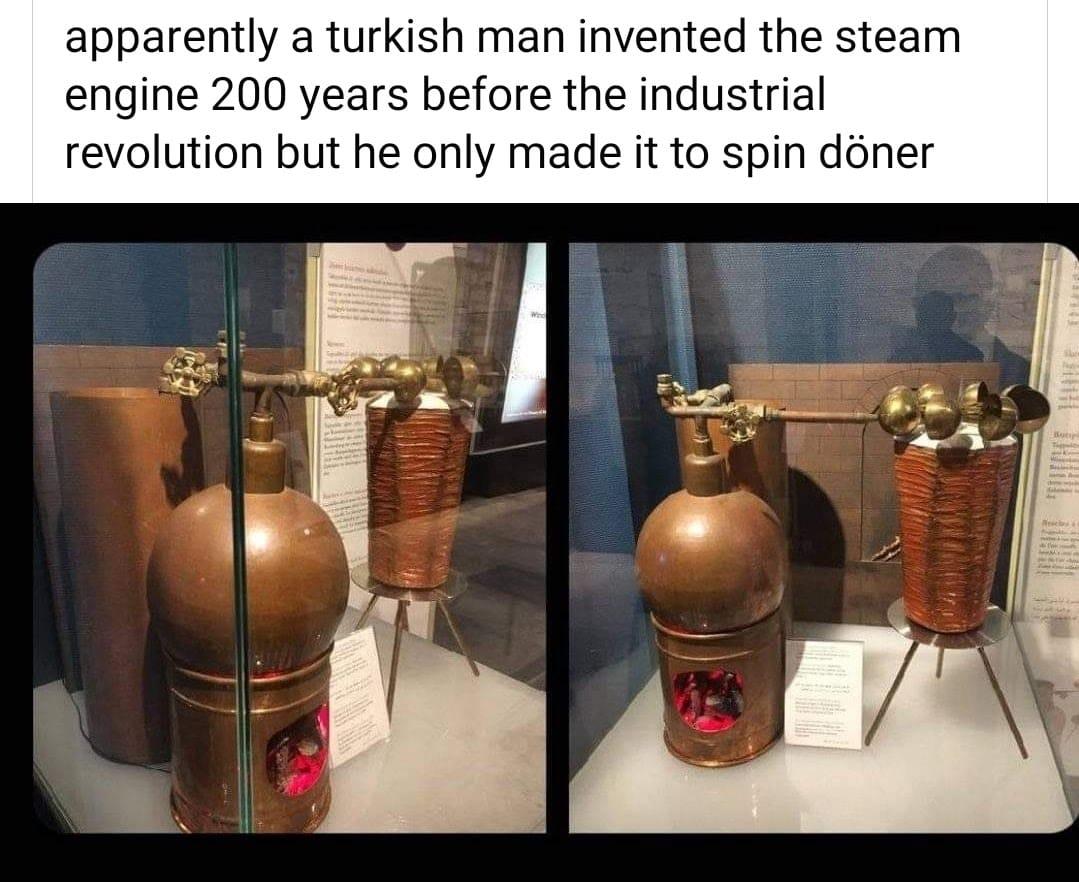 Is it true? Where can this machine be seen? What is it if it's not a steam engine?

Update: The pictures posted above show exhibit 75 in the Istanbul Museum of the History of Science and Technology in Islam (Wikipedia article, Museum website). Here is a picture I (T.S.) took during my visit there in December 2014: 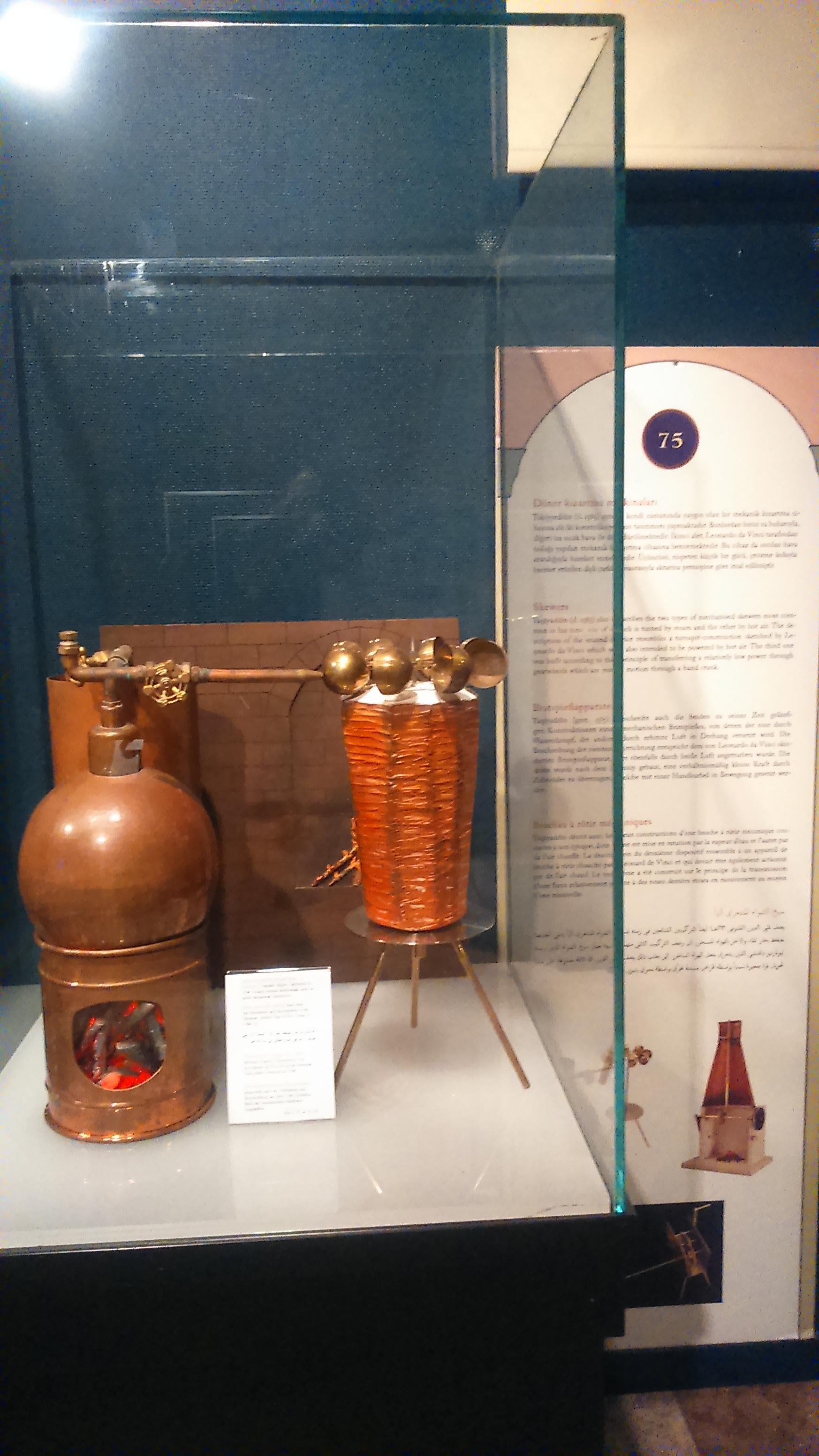 Unfortunately the resolution is not good enough to read what exactly is claimed there.

Further Update, 18-X-2021: I have contacted the museum and they were so kind to send me high-res photos of the two plaques next to the exhibit: 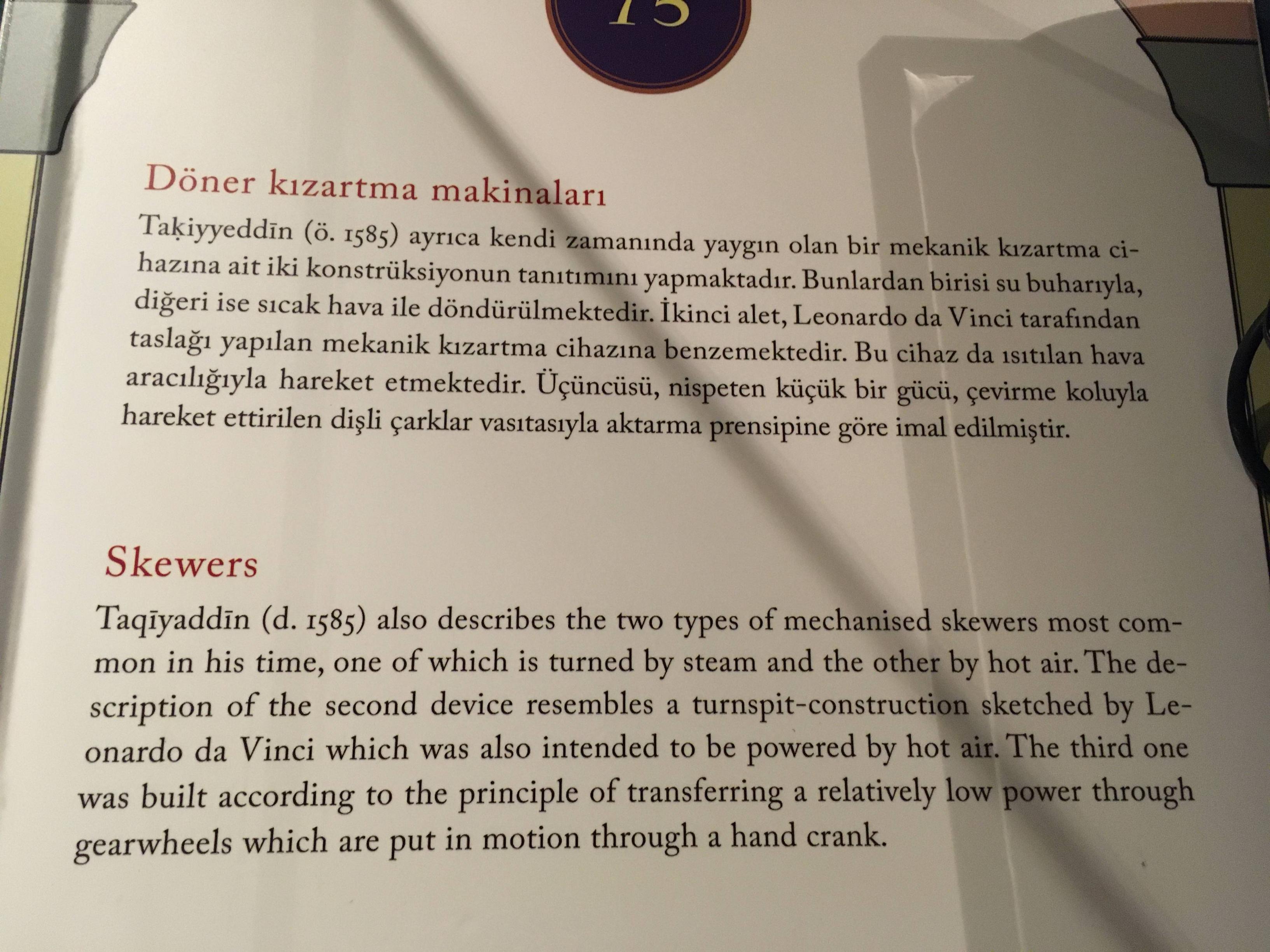 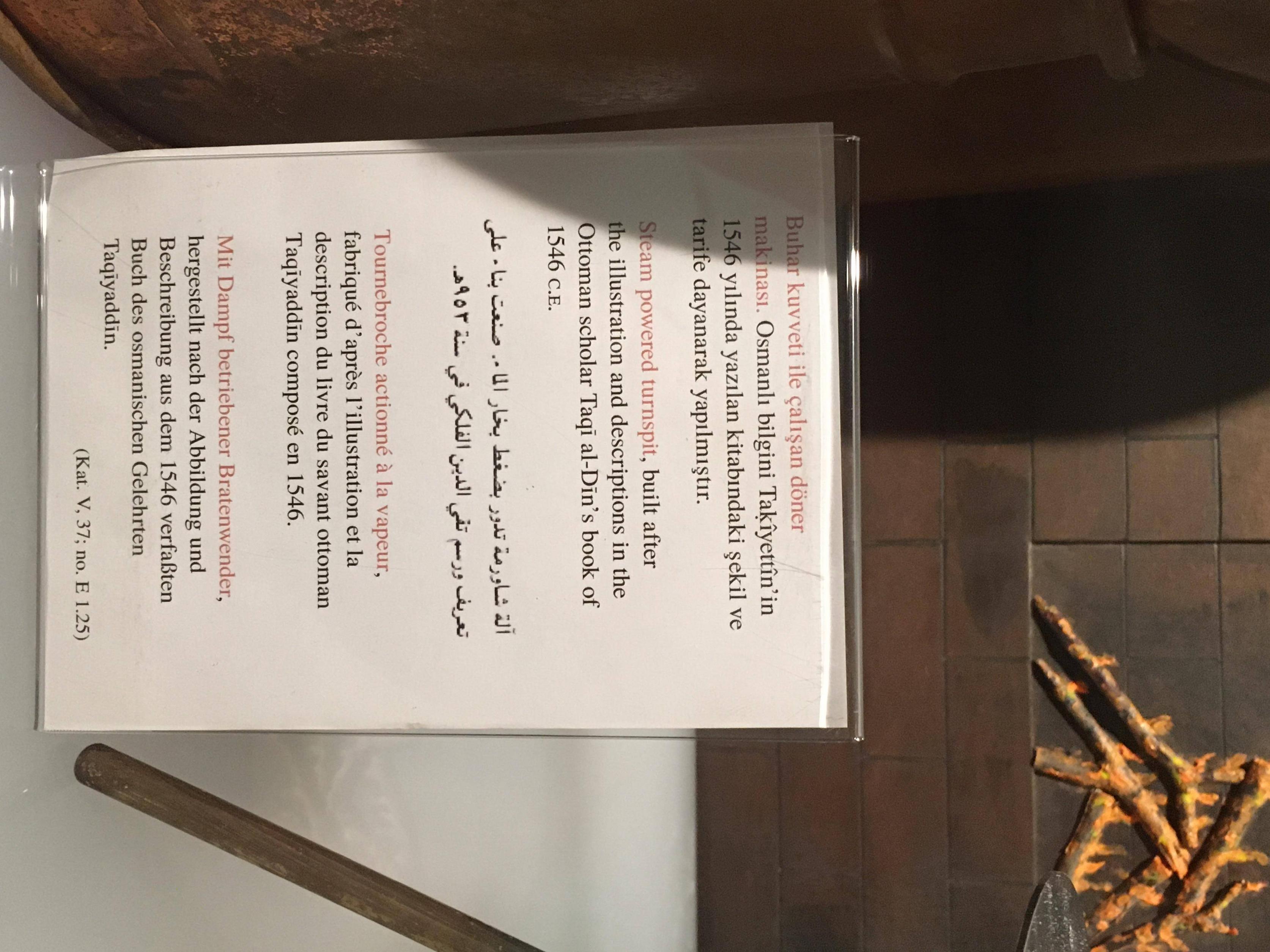 This actually matches Fizz' answer (just giving the year 1546 instead of 1551, and they are not consistent with transliterating the name Taqi al-Din / Taqiyaddin, who can blame them). The way I read it, the museum does not claim that "a Turkish man invented the steam engine 200 years before the industrial revolution". If whatever the museum claims is notable enough to re-open the question, I let the moderators decide (but I hope they approve of this edit which should make the question as good as it gets).

It's doubtful that this is an entirely accurate depiction because the vertical rotisserie depicted (no matter how powered) apparently was only invented in the 19th century, or at least we don't have evidence before.

On the other hand, that method of transmission is more like a steam turbine... and amusingly "In 1551, Taqi al-Din in Ottoman Egypt described a steam turbine with the practical application of rotating a spit." But it was probably a horizontal one... although Wikipedia cites that from a book review, which says:

There is also a self-rotating spit of obvious importance to the history of steam power: on the end of the axle is a vaned wheel driven by a jet of stem directed onto its vanes from the spout of a heated water-filled pitcher.

The original publication under review would be pretty hard find though, as it was published in Arabic in Syria. I don't know if there are other reproductions of Taqi al-Din's work, or if it was ever put in practice or was just a design. Also, the review gives the year as 1552; the manuscript is located at the Egyptian National Library in Cairo (item K3845), with a copy in Turkey and one at the Chester Beatty Library in Dublin (item 5232).

The (vertical) reproduction you have pictured seems to be pretty similar to what's displayed at the Museum of Science & Technology in Islam at the King Abdullah University in Saudi Arabia.

I'm not sure how reliable this Wikia site is, but supposedly a fuller translation of what al-Din wrote on the matter is

"Part Six: Making a spit which carries meat over fire so that it will rotate by itself without the power of an animal. This was made by people in several ways, and one of these is to have at the end of the spit a wheel with vanes, and opposite the wheel place a hollow pitcher made of copper with a closed head and full of water. Let the nozzle of the pitcher be opposite the vanes of the wheel. Kindle fire under the pitcher and steam will issue from its nozzle in a restricted form and it will turn the vane wheel. When the pitcher becomes empty of water bring close to it cold water in a basin and let the nozzle of the pitcher dip into the cold water. The heat will cause all the water in the basin to be attracted into the pitcher and the [the steam] will start rotating the vane wheel again."

1st century AD – Hero of Alexandria describes the Aeolipile, as an example of the power of heated air or water. The device consists of a rotating ball spun by steam jets; it produced little power and had no practical application, but is nevertheless the first known device moved by steam pressure.

The invention in the question is likely more efficient that the first known prototype (in fact, efficient enough to have a practical application: to spin a döner), but it's not exactly novel.

Steam engines cited as a crucial element of the industrial revolution are Watt steam engines, which were efficient enough to be a practical replacement for windmills and water wheels:

The Watt steam engine, alternatively known as the Boulton and Watt steam engine, was an early steam engine and was one of the driving forces of the Industrial Revolution. [...] Watt's design became synonymous with steam engines, and it was many years before significantly new designs began to replace the basic Watt design.

Not the answer you're looking for? Browse other questions tagged history technology history-of-science .

27
Did only a handful of people in Europe know how to do division before the 13th century?
4
Did hundreds of thousands of people die due to lack of seat belts in the period before they were made mandatory?
14
Did silver mostly not tarnish before the Industrial Revolution?
16
In the 1910s and 1920s in the US, did some people face death by government officials for challenging "industrial capitalism in American society"?