How can the J&J vaccine shot be effective against COVID-19 if it only has a ~60% efficacy rate? [closed]

Ask Question
Asked 1 year ago
Modified 11 months ago
Viewed 819 times
0
Closed. This question is opinion-based. It is not currently accepting answers.

According to the CDC's page on the safety of J&J vaccines, the reported efficacy rate of the vaccine is a staggeringly low 66.3%.

That said, the government is still promoting and touting the J&J vaccine as a reliable and effective way to protect oneself against the effects of the COVID-19 virus.

In a report published just yesterday, the CDC published an official study on 32,867 COVID vaccinated people and found numbers that closely matched those of the clinical trials mentioned above, in that Moderna is 95% effective at preventing hospitalization, followed by Pfizer at 80% and J&J at 60%.

So if the numbers are correct, why is J&J still touted as an effective protection against COVID-19 still? 60% isn't exactly the greatest confidence booster -- that's almost at the level of a coin flip. How can the J&J vaccine shot be effective against COVID-19 if it only has a ~60% efficacy rate? Pfizer/BioNTech and Moderna's vaccines offer a much more solid guarantee, but 60% for J&J?

How can 60% be considered effective?

60% isn't exactly the greatest confidence booster -- that's almost at the level of a coin flip.

That's actually not quite so.

So, for example, let’s imagine a vaccine with a proven efficacy of 80%. This means that – out of the people in the clinical trial – those who received the vaccine were at a 80% lower risk of developing disease than the group who received the placebo. This is calculated by comparing the number of cases of disease in the vaccinated group versus the placebo group. An efficacy of 80% does not mean that 20% of the vaccinated group will become ill. 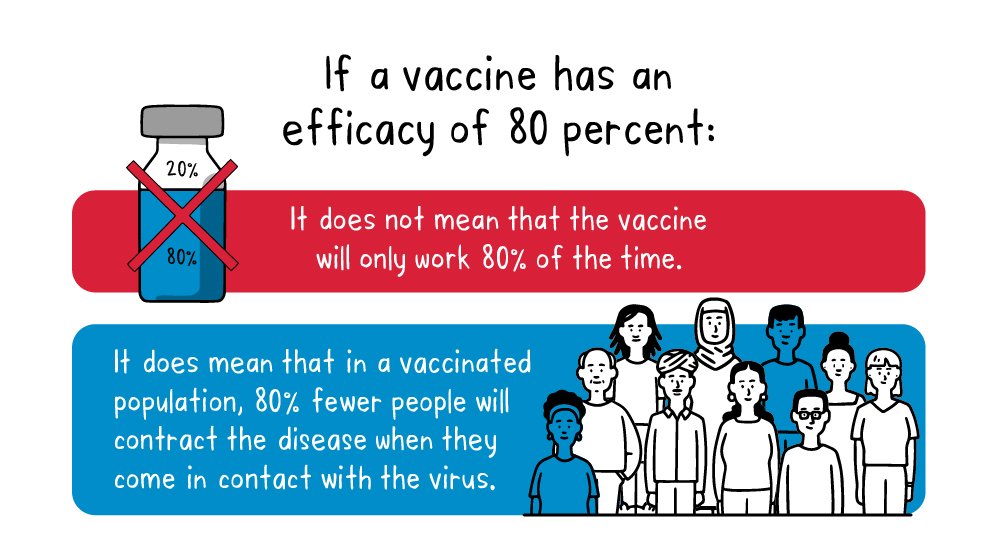 VE (vaccine efficacy) is calculated as (ARU - ARV) / ARU, where ARU and ARV are the attack rates among unvaccinated and vaccinated groups, respectively.

If the ARU is say 0.7, i.e. without a vaccine you get ill 70% "of the time" (more correctly 70% of the population would--something like this was estimated early in the pandemic) then a VE of 0.6 means that that ARV is just 0.28, i.e. only a bit more than a quarter of the vaccinated would get infected. And that's much better than a coin flip. So ARV, which is really what you want to compare with the coin flip, really depends both on the ARU and VE.

Also, the VE numbers you're talking about concern hospitalization... and the ARU for that is pretty far from a coin flip to begin with--something like 5% (based on an infection hospitalization rate of 7% among the infected, and assuming 70% of the pop gets infected). So, in this latter case, comparing two numbers (ARU, ARV) that are far from a coin flip... with a coin flip is not exactly insightful. ARV would be 0.02 in this case, i.e. your "hospitalization chance" drops from 5% to 2% when vaccinated, under these assumptions. That may not look like much (absolute) difference for individual protection, but it does mean needing less than half as many hospital beds etc.

Somewhat o/t, but in a 3rd world country (that can't afford mRNA vaccines) even the J&J vaccine could make quite a difference as anyone needing hospital care and not getting it at all is fairly likely to die; see what shortages of oxygen have caused in such counties.

And hospitalization isn't the only thing worth considering. Deaths were not considered in that CDC study you're quoting from, but the J&J vaccine seems to do better in that regard:

I'm not going to comment on how the CDC chooses to phrase their findings when comparing vaccines, but I'll just add that efficiency at single point in time is not the whole story.

By the way, there's a study based on a multiple-choice question in a sample from the general public that finds that the concept/measure of VE is highly unintuitive: only 3% of those questioned picked the correct definition; 64% confused it with (1-ARV) i.e. the percentage of individuals who do not develop Covid-19 among those vaccinated.

I wasn't too inclined to get into relative efficacy (of one vaccine vs another) here--since no numbers were disputed just the wording, but--in the meantime--the CDC & FDA have pretty much admitted that J&J isn't as effective as the mRNA vaccines, at least in terms of recommending a booster sooner for J&J (after 2 months instead of after 6 as for mRNA ones) and for everyone over 18 for J&J as opposed to select categories of risk for the mRNA vaccines; FDA's statement:

The use of a single booster dose of the Moderna COVID-19 Vaccine that may be administered at least 6 months after completion of the primary series to individuals:

The use of a single booster dose of the Janssen (Johnson and Johnson) COVID-19 Vaccine may be administered at least 2 months after completion of the single-dose primary regimen to individuals 18 years of age and older.

The CDC's statement is almost identical except for some minor wording differences:

For individuals who received a Pfizer-BioNTech or Moderna COVID-19 vaccine, the following groups are eligible for a booster shot at 6 months or more after their initial series:

For the nearly 15 million people who got the Johnson & Johnson COVID-19 vaccine, booster shots are also recommended for those who are 18 and older and who were vaccinated two or more months ago.

There's more (interesting) background on how this decision was reached reported on NPR on Oct 21; that story also notes that the recommendation for Moderna matched that for Pfizer.

And this is somewhat obvious given the technological parallel that J&J's vaccine has with AstraZeneca or Sputnik V used in other countries, but when this latter FDA & CDC announcement was in preparation news was that "Fauci said FDA panel's recommendation shows J&J vaccine 'should have been a two-dose vaccine to begin with'".

7
Do the COVID-19 vaccine candidates risk inducing infertility in women?
42
Are the mRNA vaccines from Pfizer and Moderna vegan?
10
Do young Pfizer COVID-19 vaccine recipients have 200x the background rate of myocarditis/pericarditis?
20
Did the New England Journal of Medicine determine that Sinovac is more effective than the Pfizer COVID-19 vaccine?
11
Does natural immunity offer better protection than mRNA vaccines against COVID-19 of the same variant?
31
Does the AstraZeneca COVID-19 vaccine (or any known vaccine) increase infection rates?
7
Did recently released internal Pfizer documentation show a much lower efficacy rate for the vaccine than previously claimed?
3
Does getting more doses of COVID-19 vaccinations correlate to more hospitalisations in NSW, Australia?