The official count of covid-19 deaths from the Indian government currently (2 September 2021) stands at about 440 thousand, a rate of about 315 per million people (see Our World in Data).

This is a much lower death rate than many Western countries where the reported deaths are often between 1,000 and 2,000 per million (UK, USA and several European countries are approaching 2,000 with most others seeing at least 1,000 deaths per million.

And some Indian data has been used to illustrate the benefits of ivermectin. So knowing whether the data is reliable might be useful to other countries.

But there have been longstanding doubts about the reliability of the official numbers from India. Recently, several studies have tried to estimate excess deaths in India as a way of estimating covid-19 deaths without having to rely on the official statistics.

And a recent comparison (July 2021) of different ways to estimate excess mortality concluded this (my highlight):

But all estimates suggest that the death toll from the pandemic is likely to be an order of magnitude greater than the official count of 400,000; they also suggest that the first wave was more lethal than is believed.

These estimates suggest total deaths of perhaps 4 million giving a death rate per million of over 3,000 per million, higher than the USA or the UK and possibly doubling the estimated total deaths worldwide.

Is it plausible that India's official numbers could be understating covid-19 deaths by a whole order of magnitude?

I'm honestly not sure how one could answer this question. The CGDEV paper you've quoted that from used 3 different methods to estimate the excess deaths in India... because there's no official data on those, due to the inefficiencies of India's data collection system. Even the (centralized) data that's needed for best estimates of excess deaths in India is delayed from release by several years. So the CGDEV paper does pass a "smell test" that at least they tried to "triple check" their way estimating excess mortality.

So, the best I can offer here (short of an in-depth critique of the paper's methodology) is that there's a JAMA Network Open paper that plots excess deaths vs. confirmed Covid fatalities for a bunch of countries (not including India though). 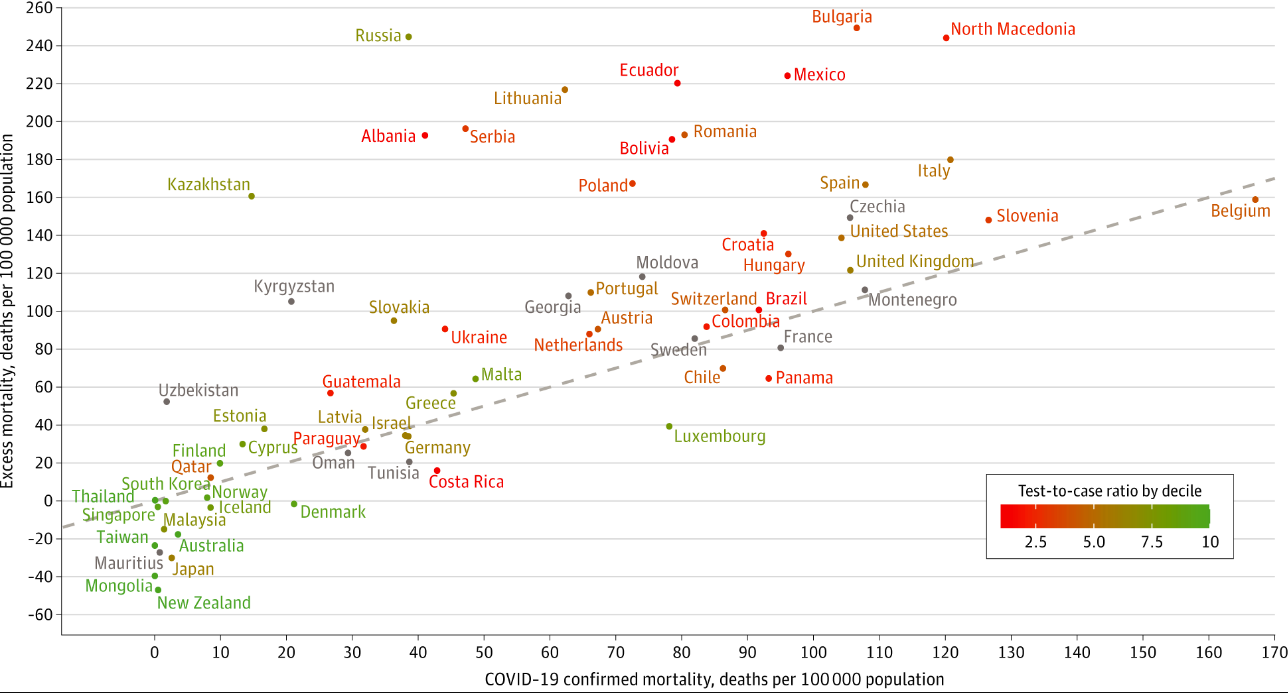 India would definitely be an outlier with a 10:1 ratio as per CGDEV's estimate... but there are a couple of countries with a similar or worse ratio in the JAMA paper, e.g. Kazakhstan has pretty similar 11:1 and there's even a 28:1 (Uzbekistan).

Also, according to a Times of India article, only 1 in 5 deaths in India had a certified cause of death... in 2019.

There's another estimate of the ratio of excess to registered-covid deaths in The Hindu, signed by the newspaper's data team; this analysis came up with a multiple of 8.2. Still, there's wide per-state variation in this study, between 0.42 (??) and 23.8 (Kerala vs Madhya Pradesh).

So, is the CGDEV estimation totally outlandish? Probably not. Does it require further investigation before a definitive conclusion can be drawn? Probably yes.

The peaks don't line-up temporally in different geographical places. From the charts below, the U.S. cases (and deaths) are rising on a new wave, while India seems to have recently descended from the previous one, and possibly just begun its ascent on another wave unfortunately. 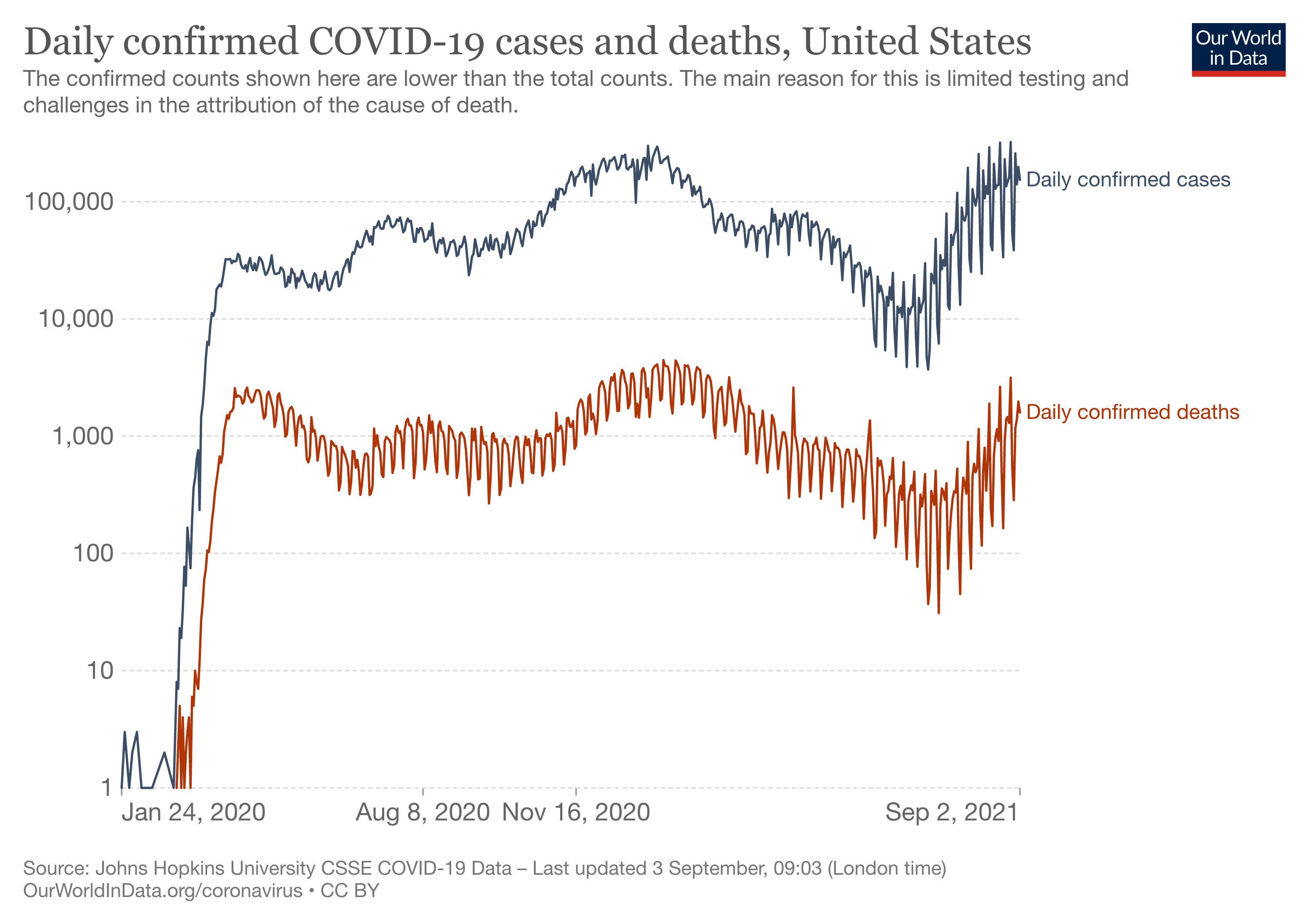 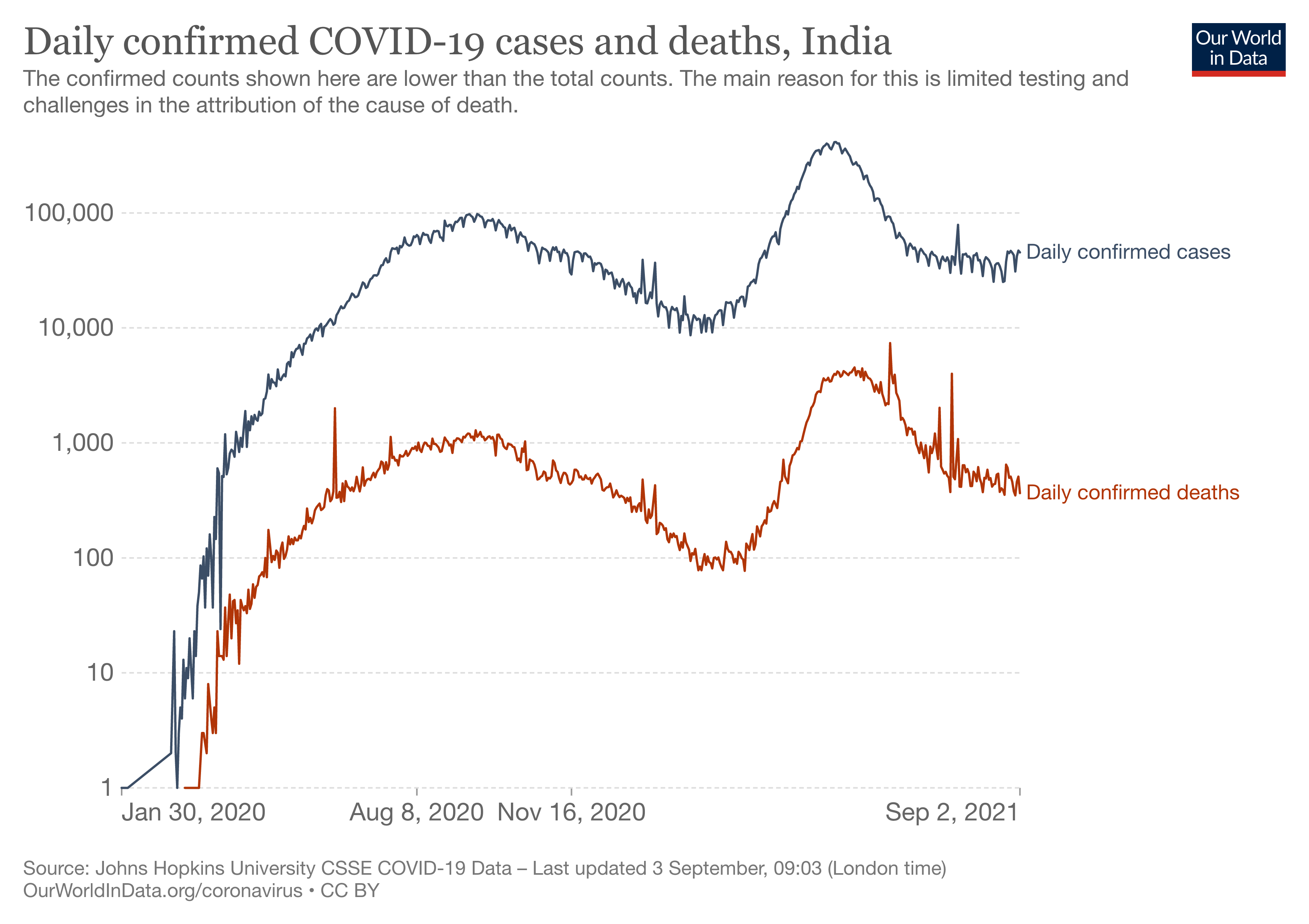 Not the answer you're looking for? Browse other questions tagged covid-19 mortality india .

1
Do African countries using Ivermectin have a better Covid-19 situation?