Did Kai Kostack provide an accurate representation of the NIST simulation of the 7 World Trade Center building collapse?

In it, he displayed the NIST simulation for comparison. 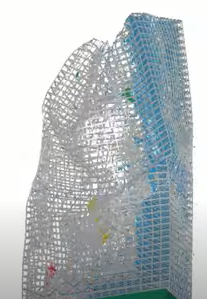 Image purportedly from the NIST simulation.

Ignoring his conclusion about the UAF simulation, his "NIST simulation" looks nothing like the real collapse.

The diagrams I saw in the NIST report look unlike the video provided: 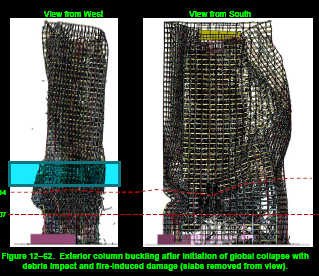 Was the video attributed to the NIST simulation an accurate portrayal of the results of the NIST report?

The video appears to be from the LSDYNA NIST Model of the WTC 7 collapse.

From the NIST website itself, we have the link to this video, which I have linked to the time in which a very similar simulation appears.

The video is also available from Wikimedia Commons, where the entire video, in its parts, are available to view. While the original sources from the bottom of the Wikimedia Commons page appear to now be down, they all link back to NIST websites.

Youtuber Mick West appears to have the actual LSDYNA model in his Youtube video Some Problems with the UAF/Hulsey/AE911Truth WTC7 Draft Report. He even addresses the issue with the deformation seen in the LSDYNA model.

You also see this deformation here, which you don't see in reality. A lot of people point to that as being a problem, but really that's just kind of indicative of the complex nature, the chaotic nature essentially of simulations like this. Once you've gone past the initial point, the actual outcome can vary quite a lot.

Kai Kostack made a mistake.

The simulation he used is the case without impact damage.

Whereas what he should have used is the NIST simulation with impact damage.

33
Was the BBC report of the WTC-7 falling before it happened a scripted event?
22
Are the 3 World Trade Center towers the only steel-framed high-rises to collapse due to fire?
70
Did Muslims celebrate the attack on 9/11 in New Jersey in 2001?
4
Did NIST edit WTC building 7 footage?