Is the COVID-19 vaccine 50 times more likely to kill young people than COVID-19 itself?

Michael Yeadon, a former vice president at Pfizer and lately known as, e.g., making unsubstantiated claims about covid vaccinations, has made the claim in question in a video interview (archived version available here). Specifically, in the interview he says that

Young people are not susceptible to COVID-19. If they acquire the virus they usually have no symptoms and they shrug it off very easily so they are not at risk. It's a crazy thing then to vaccinate them with something that is actually 50 times more likely to kill them than the virus itself.

This claim has recently started circulating in social media, e.g., in the form of the picture below. It should be pointed out that the girl in the picture is almost certainly completely unrelated to the claim since the same girl appears, e.g., in the thumbnail of this Youtube video posted in the beginning of May, 2019.

Is there any evidence supporting the claim that for young people, vaccinating against COVID-19 is substantially more dangerours than the virus? 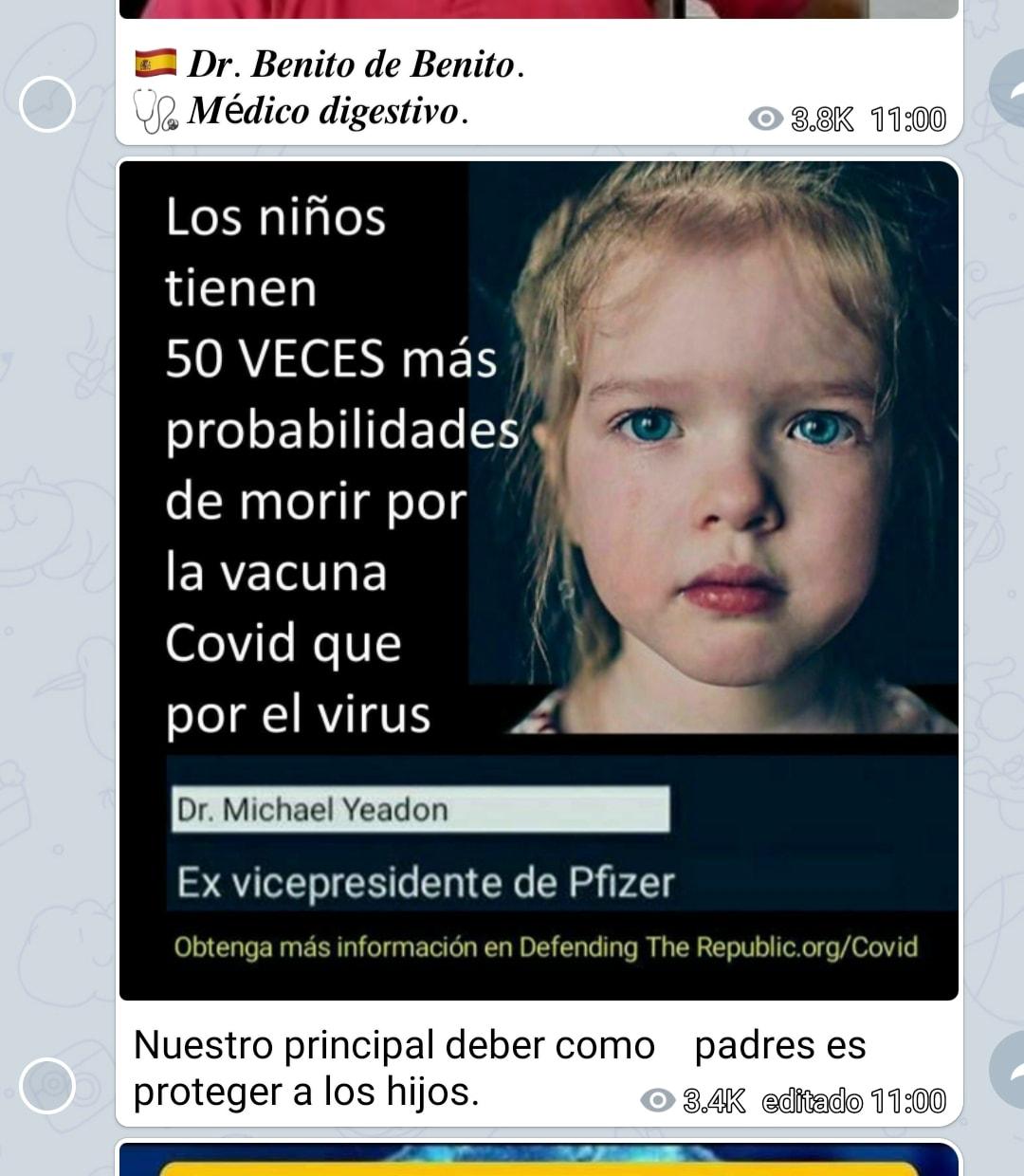 The text of the image (translated from Spanish) is:

Children have 50 TIMES more probability of dying from the Covid vaccine than from the virus.

Our principal responsibility as parents is protecting the children.

As per context from the Bannon-hosted interview, the claim was made in the context of the US FDA approval for vaccinating the 12-15 y.o., so I'll address it [only] in that regard.

The claims is unsubstantiated from what I/we know so far, simply because there were zero deaths in the vaccinated group in the clinical trial that led to this (provisional) approval.

No thromboses or hypersensitivity adverse events or vaccine-related anaphylaxis was seen. Few participants in any cohort (≤0.4% through 1 month after dose 2) had serious adverse events, and none were considered by the investigators to have been vaccine-related. No deaths were reported.

Now in the video, immediately after the quoted claim he goes on to talk about VAERS data, but this is not directly in support of his previous claim (on youth) but to make another one comparing VAERS data with that from previous years (i.e. on other vaccines), which is another anti-vaxxer meme by now.

Entertaining that he might have done a quick calculation based on VAERS data in youth... that still doesn't pan out for me to anywhere near his 50x claim. In a recent CDC report "8.9 million U.S. adolescents aged 12–17 years had received Pfizer-BioNTech vaccine" and the "CDC reviewed 14 reports of death after vaccination". The usual anti-vaxxer method (from the previously linked question) is to assume all are caused by the vaccine, which would give 14 / 8.9M = 1.57 deaths per million vaccines. On the other hand, again from CDC data (warning: it's a dynamic page, numbers may change in the future--see footnote below for what data was used) in the same 12-17 age group there are 125+102 = 227 deaths from Covid-19... out of (approx.) 1.136M + 0.773M = 1.909M infections in the same age group, so that's 227 / 1.909M = 118.9 deaths per million infections. So instead of 50:1, as Yeadon claims, the ratio I came up with is 1:75, in the opposite direction, even using anti-vaxxer methodology.

The CDC insofar could not attribute any of those VAERS deaths as being caused by the vaccine; the report additionally says:

Impressions regarding cause of death did not indicate a pattern suggestive of a causal relationship with vaccination; however, cause of death for some decedents is pending receipt of additional information.

Despite his credentials, Yeadon has made quite a few other unsubstantiated claims about the dangers of the Covid-19 vaccines and generally downplayed the risk from the virus. Some of his more recent claims have been so improbable... that there was fact checking that he even said that... e.g. he prognosticated that vaccine booster recipients will die in two years and that it's part of a "mass depopulation" programme amounting to "deliberate execution potentially of billions of people".

As a comment on the other answers, the mortality rate for a given disease (unlike the case or infection fatality rate) is obviously very dependant on the prevalence of the disease, meaning the mortality rate goes to zero as prevalence goes to zero, because the denominator for the mortality rate is the whole population, not just those infected (or showing symptoms). And surely enough, disease prevalence is a considered a factor in deciding whether to vaccinate a population, even if IFR/CFR for that disease is (or would be) high in case of an outbreak, e.g. there's no campaign or general recommendation to vaccinate Americans against Ebola, but there is one for those who work in specific areas. But it's a textbook case of faulty generalization to say something like "Americans don't get vaccinated against Ebola, therefore Ebola is not dangerous/deadly".

Even in the case of Covid-19 vaccination, some countries, e.g. Germany progressed from a recommendation (in June) to vaccinate just the adolescents who had additional risk factors to vaccinating everyone over 12 (in August). I haven't found a direct quote from STIKO (my German sucks), but they've been paraphrased as taking prevalence into account:

The advisory board to the German government said the U-turn had been made due to an evaluation of new scientific observations and data that showed young people face a high risk of getting Covid due to the more transmissible Delta variant.

and also the US rollout having had few problems in terms of side effects in children, plus the delta variant spreading...

STIKO said that they adjusted their recommendations based on new data about the potential side effects of the currently-available coronavirus vaccines, particularly after the large-scale vaccination rollout across adolescent populations in the USA. According to the committee, almost 10 million young people have already been vaccinated in the US. [...]

In addition, now that the Delta variant of COVID-19 is the dominant strain in Germany, STIKO said that mathematical modelling shows there is a significantly higher risk of young people getting infected in the event of a possible fourth wave in the autumn.

So, yeah, disease prevalence matters in such decisions, but it's not clear at all [to me] from the Bannon interview that Yeadon is talking about this issue.

The reported number of 14 adolescent "deaths from vaccination" is entirely consistent with the expected background mortality in that age group from unrelated medical reasons.

The CDC database https://wonder.cdc.gov/ permits designing your own queries. The overall mortality from medical causes (i.e., no accidents, suicide and assault) excluding certain obviously unrelated causes like congenital/chromosomal defects in the age group 10-19 years was 85 per million. If we simply use the crude criteria that the death occur within two weeks of the second vaccination, the death rate should be 1/26 of that (2 weeks of the 52 in a year), ignoring seasonal effects. That amounts to an expected mortality for medical reasons of ~3.2/million in any two-week period, or ~29 expected deaths in any two-week period among the 8.9 million vaccinated pre-teen and teenagers.

The reported number is well below the expected medical background mortality.

It is possible that his claim is less wrong than other answers suggest(1:5, 1:75), if you are very creative with defining what young people are.

In other words you would need to define young people to mean healthy young white people. And probably you could also add other factors like BMI, to further narrow down your definition.

They checked England's public health data and found most of the young people who had died of Covid-19 had underlying health conditions:

tl;dr he is wrong, but not less than math in other answers says if you consider only healthy kids.

Not the answer you're looking for? Browse other questions tagged medical-science covid-19 vaccines .

48
Have more deaths occurred after Covid-19 vaccines than from vaccine injuries in the previous 15 years in total?
7
Do the COVID-19 vaccine candidates risk inducing infertility in women?

47
Is COVID-19 more dangerous than typical annual coronavirus variants?
19
Did the U.S. refuse coronavirus testing kits offered by the World Health Organisation?
13
Is wearing facemasks the reason South Korea, Japan, Singapore and Hong Kong have more control of Covid-19
3
Has China not published an official number of Covid-19 tests performed in its territory?
66
Do the majority of doctors in the USA support hydroxychloroquine use for covid-19?
42
Is the flu more deadly than COVID-19 for children?
7
Do the COVID-19 vaccine candidates risk inducing infertility in women?
5
Were summer colds up in 2021?
3
Are unvaccinated people 10 times more likely to get COVID-19 than vaccinated people?