Are 99% of US beef cattle given steroids to promote faster growth?

Top google result The Meat You Eat: Steroid Use in Livestock claims

Each year, U.S. farmers raise some 36 million beef cattle. 99% of all beef cattle entering feedlots in the United States are given steroidal hormone implants to promote faster growth

There are six anabolic steroids given, in various combinations, to nearly all animals entering conventional beef feedlots in the U.S. and Canada:

How much of this is true?

TLDR: roughly true, although the overall percentage of US feedlot cattle given such implants is around 90%, not 99%, according to 2013 USDA data, although it's higher in some US regions, for some types of cattle (and lower in others). Some corroborating evidence: only 2% of [2016] US beef exports (by weight) were in the Non Hormone Treated Cattle program.

Basically, steroids are approved for used in beef for such purposes, but the amounts are [supposedly] regulated by testing the end-product. From AskUSDA (2019)

Are hormones used for livestock safe for consumers?

The Food and Drug Administration (FDA) is responsible for ensuring that animal drugs and medicated feeds are safe and effective for animals, and that food from treated animals is safe for humans to eat. Certain steroid hormones have been approved for use at very low concentrations to increase the rate of weight gain and/or improve feed efficiency in beef cattle. No steroid hormones are approved for use in poultry. All of the steroid hormonal growth-promoting drugs are available for over-the-counter purchase in the United States, and are generally administered by the livestock producer at specific stages of production. Residue levels of these hormones in food have been demonstrated to be safe, as they are well below any level that would have a known effect in humans. Food Safety and Inspection Service enforces FDA rules through a sampling and testing program that is part of its overall meat and poultry inspection program. For more information visit FDA Center for Veterinary Medicine's website.

If you want some kind of confirmation-by-repetition, albeit somewhat free of stats on the exact angle you ask, University of Minnesota [2019] says that the issue comes up in US trade disputes, with China nowadays. (There were similar disputes with the EU in the past. The US apparently won the latter at the WTO, although Wikipedia could be fairly misleading in that regard; the dispute apparently continued for one or two decades.):

An update on beef exports and the hormone dispute [...]

Unfortunately, there are barriers that prevent U.S. beef products from reaching their full export potential. China’s growing middle class makes it a prime location for U.S. beef exports. However, U.S. beef exports to China have been much less in volume than predicted. This is due to China’s restrictions on beef from cattle implanted with growth promoting hormones. Most cattle producers in the U.S. implant their cattle to improve production efficiency. China would need to revise its trade barriers to be more open to beef that has been implanted with growth promoting hormones for the U.S. to increase beef exports to that country. [...]

Europe has had a non-hormone treated cattle (NHTC) program since 1999. Although the U.S. has been able to supply specifically to this program for a premium, the duty-free volume is limited to 20,000 metric tons and there is a loss of production efficiency. [...]

The Food and Drug Administration has approved the use of growth promoting hormones such as estradiol, progesterone, testosterone, trenbolone acetate and zeranol. More than 20 countries use these hormones regularly [...]

Small pellets are implanted under the skin in the animal’s ear between the skin and the cartilage on the backside of the ear. The implants release the hormone compound over time into the bloodstream. Once the animal is harvested, the implanted ear is discarded. So there is no chance that an implant could enter the food supply chain. [...]

In the retail case, beef cannot be marketed as “hormone-free” because all plants, animals and humans produce hormones naturally to properly regulate biologic functions.

Beef can be labeled “naturally raised” or “raised without hormones” and must abide by the USDA voluntary claim standards “FSIS Labeling Guideline on Documentation Needed to Substantiate Animal Raising Claims for Label Submissions.”

So I guess you/one could try to find out how much of the beef in the US is raised under the latter labels, which seemingly preclude the aforementioned implants.

And finally some stats that may answer your question quantitively

Implant formulations containing steroidal hormones with anabolic activity have been used safely in U.S. beef production since 1956. Commercially available implant formulations for use in U.S. beef cattle production contain naturally occurring estradiol-17β (E2), the synthetically modified prodrug of E2, estradiol benzoate (EB), or an estrogen-like compound (i.e. zeranol). These compounds are utilized either alone or in combination with progesterone, testosterone propionate, or trenbolone acetate in differing amounts and ratios of active compounds in the final implant pellets. [...]

APHIS (2013) reported that more than 90% of all cattle entering the feedlot were administered an anabolic implant once, and approximately 80% of steers and 99% of heifers weighing less than 318-kg received 2 or more anabolic implants.

This paper has a lot more detail on the compounds used.

And the APHIS report cited has this graph: 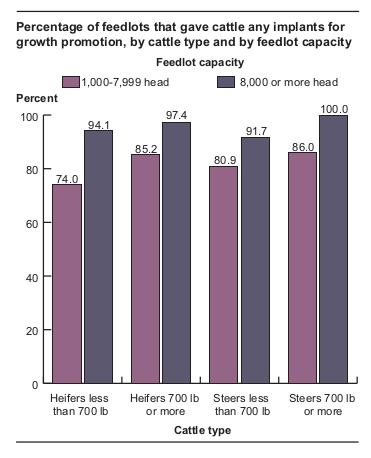 Unfortunately, as it's somewhat typical of other USDA reports I ran into, they break things down by farm ("feedlot") rather by number of heads/cattle...

You'll note in that graph that the more intensive (larger headcount) farms have a higher use of implants. So claiming that usage is north of 90% by headcount overall in the US is probably not an unreasonable extrapolation/conclusion, although 99% may be pushing it into exaggeration. Actually, the report itself says:

Regardless of cattle weight or feedlot capacity, about 90 percent of heifers and steers were implanted at least once. (table 1) 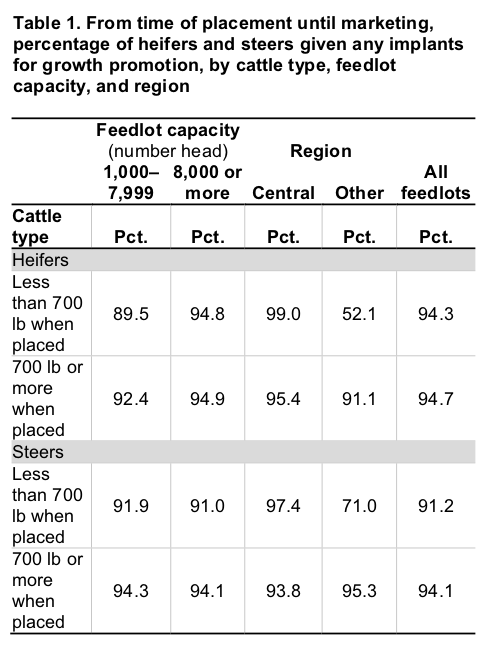 Somewhat interesting perhaps, the "Central" US region reached 99% for one category of cattle.

According to some newer data, the number of NHTC (non-hormone treated) cattle has been increasing in the US, but again, this is [annoyingly] reported in feedlots not heads...

The NHTC program is a USDA-approved program created in 1999, when the European Union and the United States agreed to control measures for trade of non-hormone treated beef. By definition, these cattle could not receive growth-promoting implants. The percentage of lots enrolled in the NHTC program grew from 5.2% to 23.8% from 2010 through 2018 (Table 1) [omitted here]. The largest increase was 8 percentage points from 2017 to 2018.

Unfortunately, just because a feedlot participates in the NHTC programme doesn't help knowing what proportion of their cattle is NHTC. Also that data is based on a sample of "67 summer video auctions" so it may or may not be representative of the US production as a whole...

Some equally vague-ish 2020 data just from Nebraska, vague-ish because it lumps together all "value added programs", which include NHTC, but also unrelated brandings...

A multitude of value-added programs are available to producers. Non-Hormone Treated Cattle (NHTC), Verified Natural Beef, Verified Grass-fed, organic, Nebraska produced, Whole Foods, Walmart-Prime Pursuits, and BeefCARE, are some examples.
It is estimated that 15-20 percent of the cattle in Nebraska are currently entered into some form of value-added program, up from 5-10 percent five years ago.

And some 2017 export (numbers-based) discussion suggested that the NHTC programme didn't amount too all that much, tonnage-wise... only 2% of US beef exports by weight:

CBW’s Steve Kay was the first to start applying scrutiny to qualifications for entry. He reported earlier that while USDA’s Non Hormone Treated Cattle (NHTC) program has been in existence since 1999, it appeared that only a tiny percentage of the 30 million cattle slaughtered in the US in 2016 went through the program.

“This was just 9pc of the amount to beef shipped to Japan, the US’s largest market, in 2016, and just 2pc of total US exports of beef and beef variety meats. The US only half-filled its 45,000t tariff-free quota to the EU last year. Only 13 US entities are currently approved sources of NHTC, and all but one are small businesses.”

“The tiny production of NHTC beef is important to consider when looking at prospective exports of US beef to China,” Mr Kay said.

Zoetis produces a range of products under the Synovex name including:

These products indications include statements like "For increased rate of weight gain for up to 200 days in pasture steers and heifers (stocker, feeder and slaughter). " (from Synovex Grass).

This answer addresses whether giving cattle to increase yield is a relatively normal practice in US ranching, and the details of some of the compounds involved, but, unfortunately does not provide a quantitative estimate of the fraction of cattle where these types of products are used.

Zoetis has a large scale manufacturing facility in Lincoln NE, so these are mass market products. However I have not been able to find indications of exactly how widespread these, or related, products are.

Not the answer you're looking for? Browse other questions tagged united-states medications agriculture .