Is Alberta ending coronavirus restrictions because of failing to provide evidence of SARS-COV2 virus existence in court?

Variations of this image circulate claiming that a man named Patrick King won a court case in which he challenged the province to provide an isolated sample of the virus, which they failed. The rumors claim that for this reason, Alberta is ending all restrictions soon. Is this take accurate? 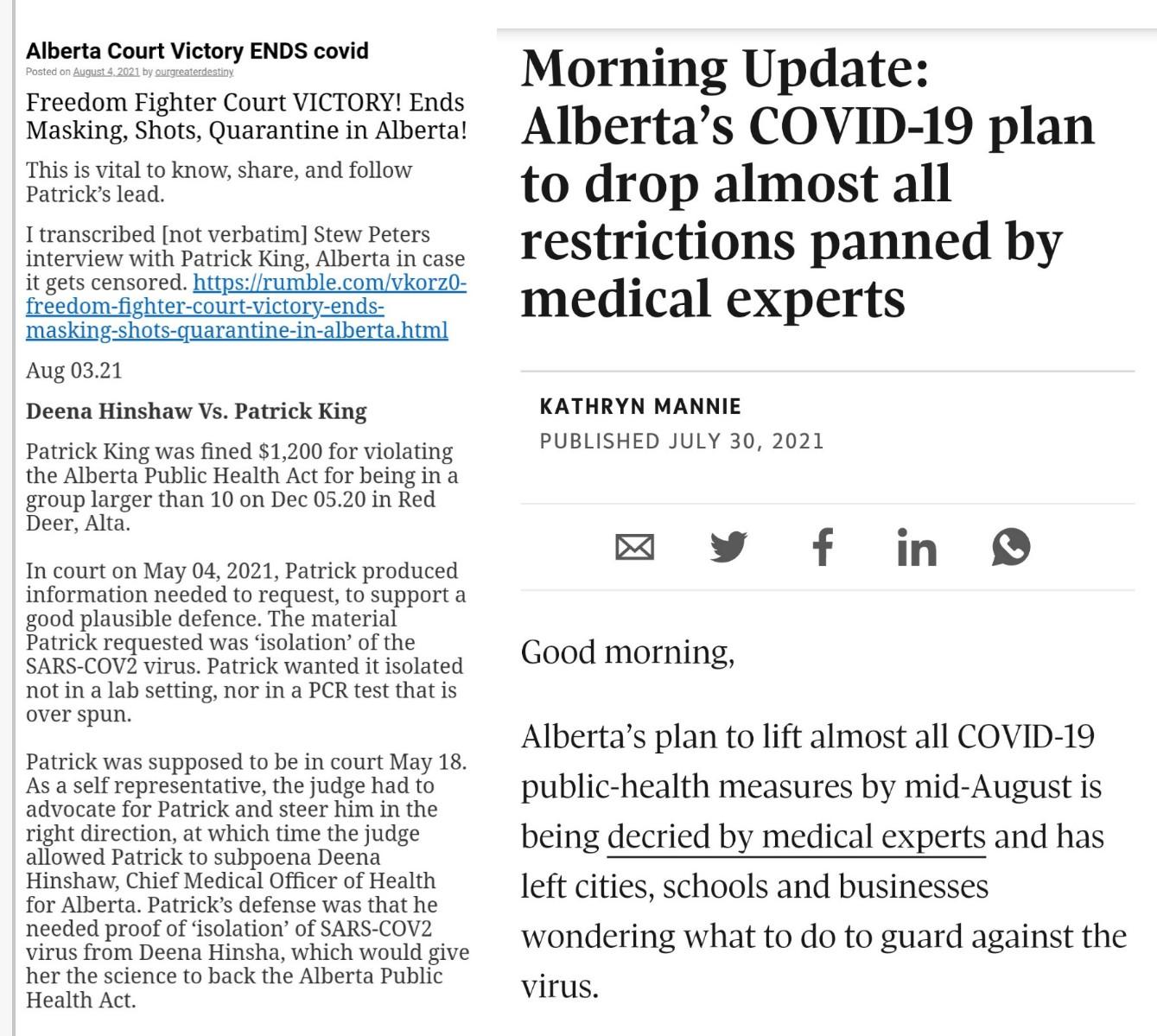 Longer version with (some) references.

This appears to be a disingenuous conflation of a completely misrepresented text in a court document with events that happened independently of the court case against Patrick King.

Patrick King is trying to get out of paying a $1200 fine for flouting public health regulations that were aimed at reducing the spread of COVID19. Last December, he took part in a protest and was fined for being part of a group of more than 10 persons assembled in public, in violation of the then active rules limiting public gatherings.

His defense is based around his belief that COVID19 is a hoax and does not exist. No virus, no basis for the public health regulations, no basis for him to pay the $1200 dollar fine.

There have been ongoing hearings since May 4,2021. Mr. King has been representing himself in court.

Mr. King had tried to get a subpoena issued to get proof of the existence of the virus that causes COVID19 from the chief medical officer of health (CMOH) for Alberta, Canada.

His application for the subpoena was denied.

Mr. King showed a picture of part of a document he received from the court. This document gives various reasons why the request for a subpoena was denied.

The only way to actually see this document is to watch the video recording of the interview (document is shown at about the 5 minutes, 30 seconds mark.) Edit: see below. The document itself is now available.

Screenshot of the video: 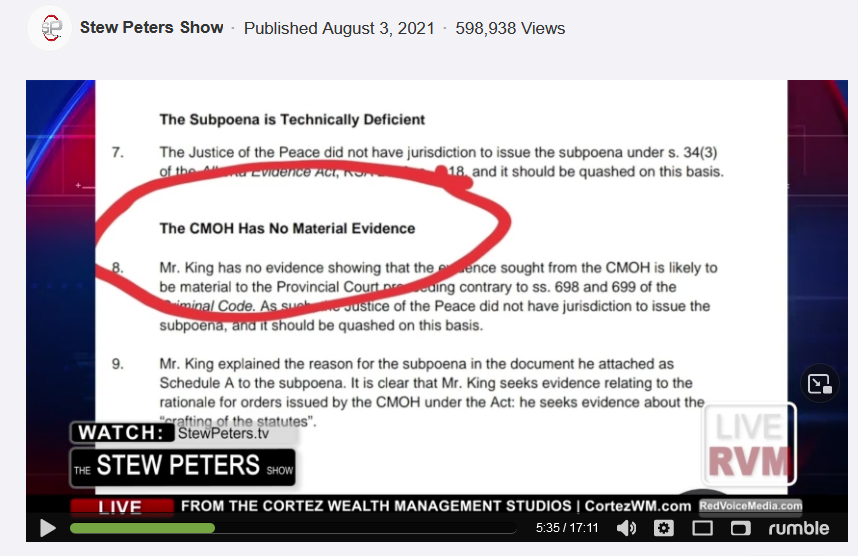 Point number 8 is the part that seems to have caused all the excitement:

There's two important things to take from that passage:

The thing that everyone is all excited about is the line above that:

The CMOH Has No Material Evidence

The COVID deniers are all claiming that "The CMOH Has No Material Evidence" means that the CMOH can't prove that the COVID virus exists - but all that line means is that the proof is irrelevant to the case.

On July 28, 2021, the CMOH for Alberta announced plans to lift many public health restrictions.

This occurred at about the same time that Mr. King received the document mentioned above.

The result was that the COVID deniers have taken their misinterpretation of the words from the court and combined the independent announcement of the lifting of COVID restrictions in Alberta, Canada as a victory for their ideals.

Mr. King and his followers are totally misrepresenting the facts so that they can claim a "victory" for their beliefs.

Note 1: This is not just my interpretation. Even in the places where Mr. King's video is spread and supported, many people who deny that COVID19 exists are also stating that Mr. King's interpretation is wrong.

Thanks to @richardb for providing more information on the background. Things actually get worse for Mr. King's view when you see the entire background.

The Justice Center for Constitutional Freedoms has obtained copies of the court transcripts and the subpoena denial.

You can download or read the full documents at the given link.

Because he is not a lawyer and is representing himself, Mr. King failed to provide notice before the trial that he was going to challenge the Canadian Charter of Rights and Freedoms (like the US Constitution.) Without that notice, the trial is only about whether or not he actually broke the law at the time he was issued the ticket for not following the health and public safety regulations during a protest on December 5, 2020.

In July 2021, Mr. King tried to subpoena Ms. Hinshaw from the CMOH in order to get information he believes will prove that the regulations were invalid since COVID (he believes) doesn't exist.

The page after the one shown in the video puts the lie to the whole thing as it makes very clear why the subpoena request was denied.

Here's what the video shows:

Here's the page after:

You might make an argument that Mr. King misunderstood point (8.) because he doesn't understand the special use of the term "material evidence."

Points (10.) and (11.) are so clear as to exclude any misunderstanding. Mr. King ignored them, and misconstrued point (8.) to claim his "victory."

They aren't at all connected. It helps to understand the legal terminology and process. @JRE's excellent answer is on the nail.

Courts are extremely focused entities. If a point doesn't matter to a case - if it makes no legal difference to the outcome - they will say so, quickly and decisively, and often in legal terminology.

In this case, the court states that King has requested information or materials be disclosed by the CMOH, and asked the court to force the CMOH to disclose it. But instead the court rules that even if the CMOH were to disclose it, King has totally failed to show that it would make the slightest difference to the outcome of his case in legal terms ("[King] has no evidence showing that the evidence [he seeks] from the CMOH is likely to be material"). Presumably because whatever documents or materials exist that the CMOH might or might not possess, could not possibly in a legal sense, change the fact that the law says King had to comply with restrictions on gatherings, and King didn't do so.

The court summarizes this by saying that no evidence relevant to the case appears to be in the possession of the CMOH. They don't possess any evidence likely to change whether or not, or how severely, King will be found guilty. Any such documents or materials (even if they exist) that King wants to get from the CMOH would not make any difference to the case, at all, even in theory.

The only reason to request any information or testimony from anyone, in any way, is to help the court decide the legal outcome of the case. That's what courts do. They exist to decide cases, they aren't there as a way to provide platforms. So if it won't matter to that outcome, then it's merely a distraction to the court and should (in legal terms) be ignored, whether or not its arguably got significance to some other debate or issue.

So in the court's ruling, the judge says there is zero benefit to the court in deciding King's outcome, from coercing the CMOH to produce the things King wants, because it wouldn't change anything even if the CMOH did so. Even if by some miracle the CMOH said they had exactly the materials King believes, that still wouldn't change the legal conclusion of his case. So the court flatly refuses King's request.

The court unfortunately sums this up in usual legal terseness, by saying that the CMOH "has no material evidence", meaning, (1) there isn't any reason to believe that CMOH possesses any evidence that is relevant (could make a difference) to deciding in * this * legal case, whether or not King is guilty of breaking the law as it stands; and (2) because of how criminal law works, the court's conclusion after hearing King's request, is to refuse him the order he seeks, because realistically the CMOH does not have, and has never had, any evidence that would matter legally, in this prosecution.

You can see how this has been totally misunderstood by King, who is not a lawyer, and who has strong views and seizes on that summary. But if he was a lawyer he would understand what it is saying, it is not even slightly ambiguous, it's crystal clear - to a lawyer that is :)

The other news is pure coincidence of timing.

In case anyone's curious, the covid virus Sars-Cov-2 was isolated in March 2020, shortly after the pandemic started, by teams from Sunnybrook McMaster (NY, USA) and Uni of Toronto (Canada). Just in case anyone wondered....

Update 2: Although the meaning of the documents is plain English, its nice to see them backed up by sources too. Courtesy of @Fizz (see comments), source 1, source 2.

Not the answer you're looking for? Browse other questions tagged law covid-19 canada .

-12
What evidence is there to say a SARS-COV2 virus exists?

12
Do elements of the genetic code of SARS-CoV-2 provide evidence that SARS-CoV-2 originated in a lab?