Is the decline in polio symptoms directly caused by the banning of pesticides such as DDT?

According to Forest Maready's "The Moth in the Iron Lung" and several other sites brought to my attention by social media posts, the poliovirus wasn't as virulent as thought. Claims by the book's author include (as summarized by their YouTube video):

The authors then attribute the "polio" epidemic to the use of arsenic and DDT Poisoning as shown by this graph: 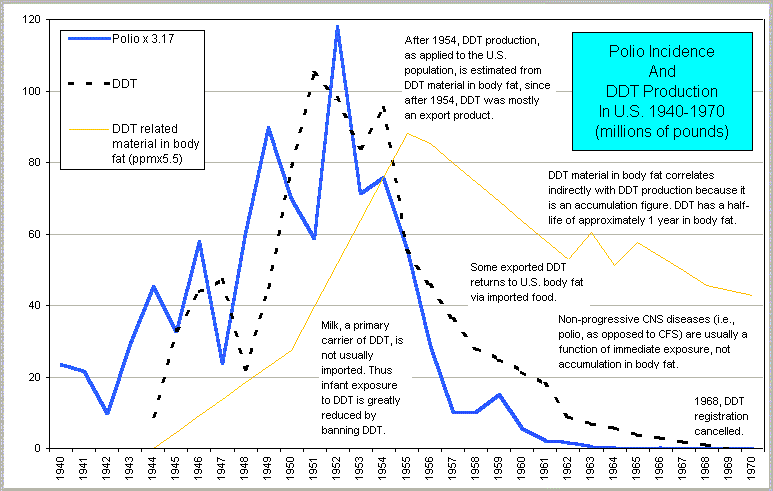 (Both graphics from: Jim West: "Pesticides and Polio: A Critique of Scientific Literature", February 8, 2003.)

The purpose of this presentation from the author is to show that the polio vaccine wasn't as effective (if not effective at all) as once claimed. Many anti-vaxers are using this as a reason to prove that vaccines aren't actually as effective as claimed.

My question is if there has been any research into the claims that pesticides used during that time caused paralysis that was attributed to the poliovirus. Has there been any research into the lowering of poliovirus diagnoses directly related to the reduction in the use of these harmful substances? Finally, is there strong evidence that the vaccine is directly tied to the reduction in poliovirus diagnoses?

I'll address your last question first, starting with the mantra of science and statistics:

There is a common anecdote in my home country about the mayor of a coastal city that commissioned a study to understand factors that relate to the number of drownings. One of the factors that the study showed to be strongly correlated to increase in drownings was the increase in ice cream sales in the beach kiosks. Therefore, the mayor decided to ban ice cream sales in beach kiosks.

Of course it didn't work; ice cream sales correlate to drownings because they share a common cause: the number of people at the beach

That's why for a vaccine (or any new medication to be cleared for use, for that matter), there is a need for clinical trials. They exist to document evidence of a cause-and-effect relationship between receiving the vaccine and not getting the disease.

If the vaccine was not effective in preventing polio, all three groups would have the same infection rates. This was not the case. The group who received the vaccine had SIGNIFICANTLY lower infection rates than the other two control groups, who either received a placebo shot or no shot at all.

Additionally, the Sabin vaccine was developed and rolled out in the 60s and it is still prevalently used in many countries due to ease of transport and application (it is oral drops) - and the added benefit of flushing out pathogenic strains from the water supply, creating another layer of protection

The person who made this graphic only looked at US data, so another thing to be considered is the polio-free country list with the dates, the large majority of the countries achieved polio-free status far before the worldwide ban on DDT and it also includes countries that still use DDT to this day for malaria vector control

Polio went up before DDT in most cases, as well as going down before DDT use was reduced, not to mention that polio went down during an increase of DDT use in 1951.

Also, polio was dramatically reduced in the late '50's while DDT in the body fat was still climbing.

There's really only a few places where polio and DDT are similar, but that's definitely not enough to make this sort of claim.

This is even if those charts are accurate, which I highly doubt, since they are on a conspiracy theory site.

Overall, we rate the Weston A. Price Foundation a quackery level pseudoscience source based on the promotion of anti-vaccination propaganda and dangerous alternative nutrition.

Founded in 1999, the Weston A. Price Foundation is a nonprofit organization that promotes alternative health, nutrition, and pseudoscience.

Through this intellectually paralyzing atmosphere, Dr. Biskind had the composure to argue what he thought was the most obvious explanation for the polio epidemic: Central nervous system diseases (CNS) such as polio are actually the physiological and symptomatic manifestations of the ongoing government- and industry-sponsored inundation of the world’s populace with central nervous system poisons.

The CDC plainly says polio is a virus, not a poison.

Polio, or poliomyelitis, is a disabling and life-threatening disease caused by the poliovirus.

The virus spreads from person to person and can infect a person’s spinal cord, causing paralysis (can’t move parts of the body).

Polio is absolutely a virus, as can be seen through an electron microscope and has RNA, which poisons don't have.

Poliovirus is composed of an RNA genome and a protein capsid. The genome is a single-stranded positive-sense RNA (+ssRNA) genome that is about 7500 nucleotides long.[2] The viral particle is about 30 nm in diameter with icosahedral symmetry. Because of its short genome and its simple composition—only RNA and a nonenveloped icosahedral protein coat that encapsulates it, poliovirus is widely regarded as the simplest significant virus.[3]

This can be confirmed many places, including the Mayo Clinic site, which also mentions that the last naturally occurring case of polio in the US was in 1979.

Polio is a contagious viral illness that in its most severe form causes nerve injury leading to paralysis, difficulty breathing and sometimes death.

In the U.S., the last case of naturally occurring polio was in 1979. Today, despite a worldwide effort to wipe out polio, poliovirus continues to affect children and adults in parts of Asia and Africa.

The United States banned the use of DDT in 1972, but some countries still use the chemical.

As far as proof of the polio vaccine being shown to reduce the cases of polio, there's a significant repository of research and other information compiled here and here. And the WHO states that since the resolution to eradicate polio in 1988, in India alone the cases of polio have dropped by 99%, and this is still an ongoing fight to get rid of polio. India still uses DDT in limited instances to kill mosquitoes carrying dengue, but going from a 350k cases in 1988 to 160 in 2020 doesn't correlate at all with the use of DDT. If we look at the graph for polio cases in India, we see that the cases dropped dramatically in the 80's and 90's, which is well before DDT was even partially banned in 2008. 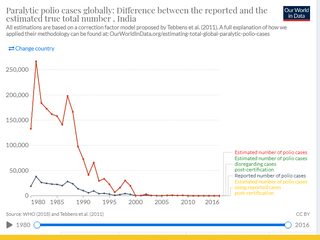 Not the answer you're looking for? Browse other questions tagged vaccines pesticides .