Did Truman say this about helping whichever of Germany and Russia were losing during the war?

I've tried searching on Google Books but couldn't find a first-hand source for this statement. Did Harry S. Truman actually say this during World War II?

An image slightly manipulated to show the date and source:

In its surrounding context: 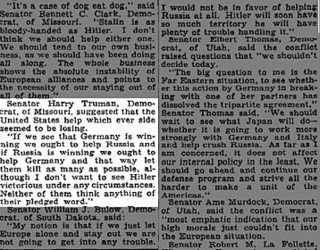 Senator Harry Truman, Democrat, of Missouri, suggested that the United States helps whichever side seemed to be losing.

Note: this is then subsequently always quoted to show “his firmness” towards “totalitarian adversaries”. Although at the time it was perhaps not always understood as really all that cynically “serious”, but even somewhat flexible, if not meaning that the above quote is to be read rather differently. Note the word “then” giving this a different spin: 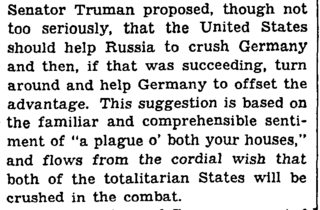 There was another disturbing consequence of the war, and this happened at the Capitol. Several Senators and Representatives took the short view which Hitler and his advisers doubtless hoped they would take. Senator Truman proposed, though not too seriously, that the United States should help Russia to crush Germany and then, if that was succeeding, turn around and help Germany to offset the advantage. This suggestion is based on the familiar and comprehensible sentiment of “a plague o’ both your houses,” and flows from the cordial wish that both of the totalitarian States will be crushed in the combat.

This saying was never disputed, but also not repeated anywhere else apart from this quoted source. And the one time source is usually characterized as:

Truman’s philosophy of foreign affairs was, at best, nebulous. Just after Hitler had invaded the Soviet Union, Senator Truman had casually commented to a New York Times reporter:

Compare this with how David McCullough describes this as “when asked what he thought he spoke his mind” ( — David McCullough: “Truman”, Simon and Schuster: New York, 2003. p308 gBooks)

Not the answer you're looking for? Browse other questions tagged quotes world-war-ii .