Is there a breeding population of big cats living wild in the UK?

In an October 2020 Daily Mail article, a 'big cat tracker', Rhoda Watkins claims the UK has a healthy wild population of leopards and pumas.

However, when I search on Wikipedia and other wildlife/conservation sources, the distribution range of pumas and leopards does not include the UK. Pumas live in the Americas, and leopards live in Africa and South Asia.

Is there a viable breeding population of pumas and leopards living in the UK?

There have been numerous reports of a "beast of Bodmin/Dart moor". There is a list of reports of contacts with big cats here thanks to Weather Vane. The best evidence is blurry photos that seem to indicate there is a large cat, but certainly do not allow one to definitively confirm that they are leopards and pumas, or that they are breeding.

The Telegraph reported in 2016 that they had 'solved' the mystery and traced it back to the release of three pumas in 1978 by Mary Chipperfield, the famous circus owner, after her zoo in Plymouth was forced to shut down. If this is the source, then recent sighting would be evidence that there is a breeding population, as the life expectancy of pumas in the wild is 8 - 13 years with a maximum of 20 years in captivity. However, others discount the story: Roger Cawley, the husband of the late Ms Chipperfield, said: "We had no dealings with the old Dartmoor Wildlife Park all those years ago and certainly never released pumas or any other wild animals on Dartmoor."

This is a still from a video reported by the BBC to show a three-and-a-half foot animal. 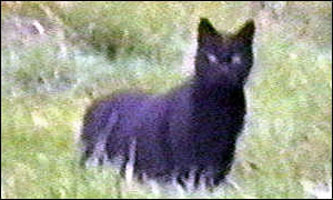 Not the answer you're looking for? Browse other questions tagged zoology united-kingdom cryptozoology .

14
Are there any sightings of the Loch Ness Monster before 1933?
11
Has there ever been a thorough search of Loch Ness (for the Loch Ness Monster)
13
Are there no camels in the Qur'an?
10
Was there an electoral fraud during the referendum for the independance of Scotland?
10
Was there a spike in hate crimes after the Brexit referendum?
2
Have there been polls in the UK that show that most British people support the idea of a Muslim ban?
1
Do praying mantises kill lizards in the wild?
14
Did the submersible 'DSV Alvin' spot a living plesiosaur?