Is this the flag of Niobrara County, Wyoming?

I recently encountered this image, stated to be the flag of Niobrara County, Wyoming: 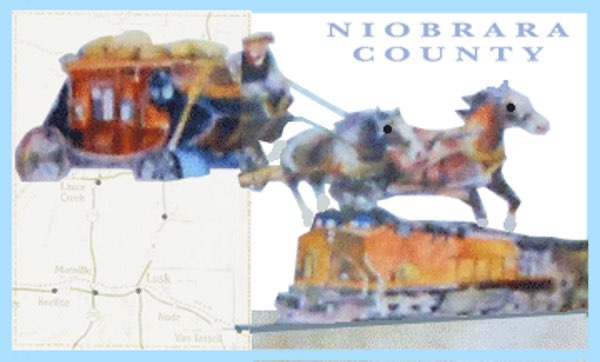 It was posted specifically as an "eye hurting flag"; that is, it was noted as especially ugly. I know many strange flags exist, but several elements of this strike me as possibly fake:

It may be a poor recreation of the real thing just as well as a bizarre hoax targeting the least populous county in Wyoming.

What I've looked in to

Searching both for this image and for "niobrara county flag" are yielding only this page on Flags of the World, which contains the disclaimer:

The quality of images and news varies very much: the website contains not only well-known flags but also sketches and rumours, often seized on the spot from a TV report or a magazine. In any case we disclaim any responsibility about the veracity and accuracy of the contents of the website.

It credits the image to "Fred Drews". The linked page on county and municipal flags of Wyoming also indicates that this flag would have had multiple physical copies produced and flown in 2012, as part of the State Fair that year.

The county's website's banner graphic contains part of a flag, but it looks like it's just the state flag of Wyoming:

Likewise, the Google Maps Street View imagery (taken in 2018) of the Lusk Town Hall shows only the national flag of the United States: 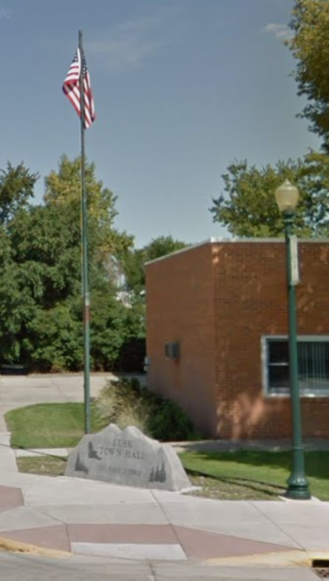 and the location of the county government at 424 South Elm shows none at all--though this photo was taken in 2011.

I found two images of the State Fair county flag parade, and attempted to cross-reference them with the aforementioned Flags of the World page, but could not quite identify a good number of the flags, and saw a few more that seem entirely unlike any on the website: (neon lime green numerals correspond to the alphabetical order of the counties; I applied a sharpen filter because I noticed after the fact how indistinct the text is otherwise and I can't be bothered to do anything smarter at the moment) 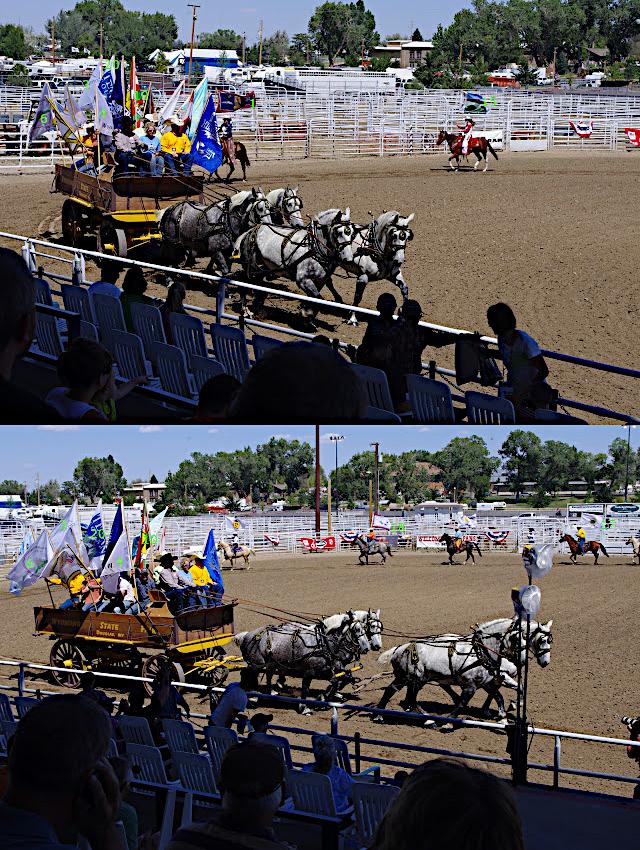 Is this image representative of a flag used by or assigned to Niobrara County, Wyoming in some official or popular capacity? If so, how faithfully does it represent it?

Is this the flag of Niobrara County, Wyoming?

I emailed Becky Freeman, the county clerk of Niobrara County. She clarified that the flag depicted in the image @Unrelated String encountered was created for the 100th year of the Wyoming State Fair (which would seem in line with their comment yesterday1), and that Niobrara County does not have an official flag. 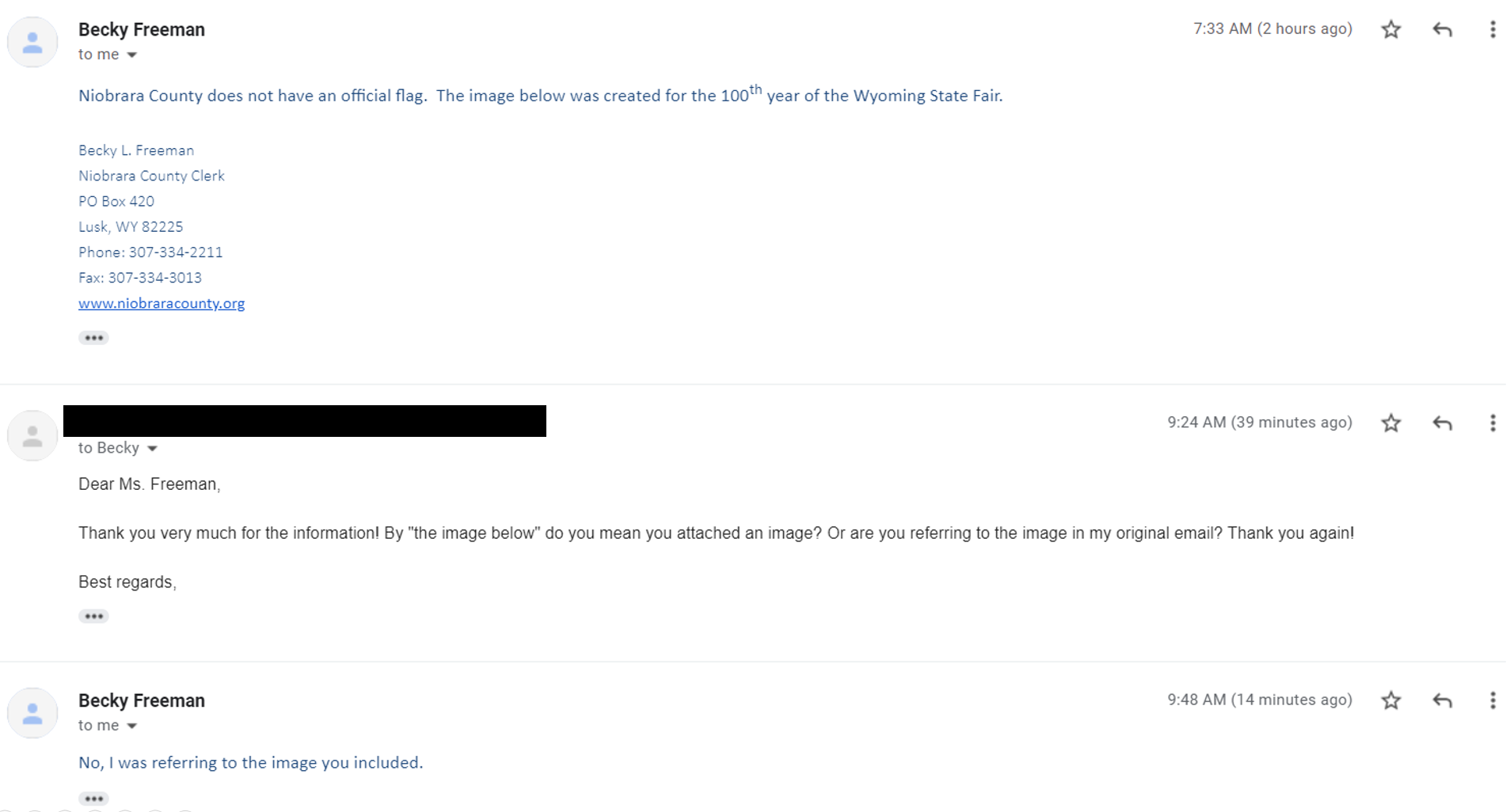 The Flags of the World page for the similarly strange flag of Park County, Wyoming states that the Wyoming State Fair requested that each county in the state have a flag for its 100th anniversary, and that that flag was designed by a fifth grader participating in a contest that was then held by Park County. That flag does appear in one image of the flag parade (marked 15 in the top one). I suspect there may be a similar story for Niobrara, but there being so many flags I couldn't identify in the images just raises more questions.

No, it is not the official flag of Niobrara County.

Niobrara County does not have an official flag. 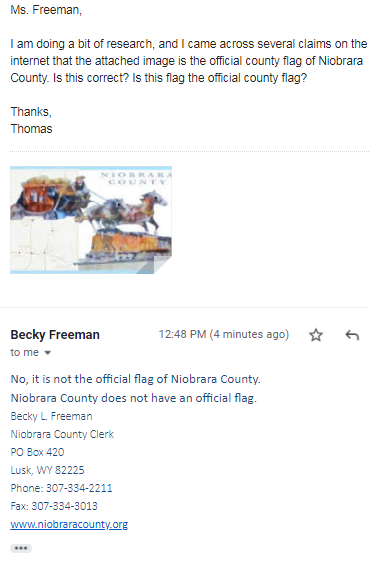 Barry Harrison had the same idea and Ms. Freeman's response to their email indicated that the flag was designed for the 100th Anniversary of the Wyoming State Fair.

11
Do the 3 red stars on Washington DC's flag represent 3 city states?
13
Does majority-white and majority-republican Owsley county have the highest SNAP usage?
11
Did Betsy Ross make the first US flag?
4
Was George Floyd a Masonic Sacrifice or even a Mason?
151
Do vote counts for Joe Biden in the 2020 election violate Benford's Law?
8
Did COVID-19 kill ~5 times more people per capita in Jun-Aug 2021 in US counties that >70% voted for Trump than in those which voted <26-32% Trump?