Did Louis Pasteur keep a gun in the laboratory while developing the rabies vaccine?

Is it true that while developing the vaccine for rabies Louis Pasteur kept a gun in his laboratory and had instructed all his lab assistants to shoot anyone in the head who accidentally got infected with the virus?

Other places making the claim:

The work was so dangerous that the assistants kept a loaded gun in the room so that, should a terrible accident happen, they could end it all then, rather than suffer death from rabies.

The risk of losing control of these animals loomed large, but the bullets in the revolver weren’t intended for the dogs. Rather, if one of the assistants was bitten, his colleagues were under orders to shoot him in the head.

The story appears to be mostly true. It was told by the niece of one of the men who participated in the early experiments.

The story is quoted in the Louis Pasteur biography by Patrice Debré. 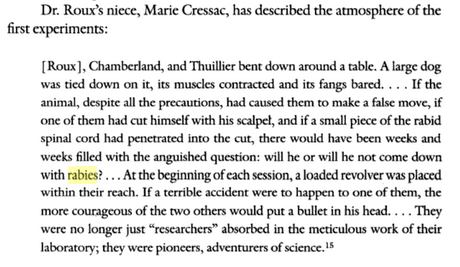 Dr. Roux's niece, Marie Cressac, has described the atmosphere of the first experiments:

[Roux], Chamberland, and Thuillier bent down around a table. A large dog was tied down on it, its muscles contracted and its fangs bared... If the animal, despite all the precautions, had caused them to make a false move, if one of them had cut himself with his scalpel, and if a small piece of the rabid spinal cord had penetrated into the cut, there would have been weeks and weeks filled with the anguished question: will he or will he not come down with rabies?... At the beginning of each session, a loaded revolver was placed within their reach. If a terrible accident were to happen to one of them, the more courageous of the two others would put a bullet in his head.... They were no longer just "researchers" absorbed in the meticulous work of their laboratory; they were pioneers, adventurers of science.

There is a reference number (15) to a footnote that unfortunately isn't available in the online copy of the book. That footnote would presumably give a more accurate source for the quote.

Note: "Mostly true." The story as it is repeated around the internet mentions Pasteur himself keeping the gun at hand. The quote from those involved don't mention Pasteur actually having the gun in hand. It is all about his assistants who actually handle the infected animals.

I can't find anything that says that Pasteur himself really ever touched the weapon or was involved with it in any way.

Not the answer you're looking for? Browse other questions tagged medical-science zoology vaccines history-of-science .

15
Did the lead developer of the HPV vaccine come out against it?
25
Did a US court rule that the MMR vaccine causes autism?
13
Did an experimental Oral Polio Vaccine (OPV) cause the AIDS pandemic?
13
Did Dr Jacques Grancher accidentally infect himself with rabies during Pasteur's rabies vaccination experiments?
9
Did Pfizer intentionally delay the COVID vaccine until after the election?