Were "ancient nanostructures" found in the Ural Mountains in 1991?

This article tells a fantastic story of mysterious nanoscale artifacts found in the Ural Mountains in 1991.

These manufactured coils were initially discovered during geological research associated with the extraction of gold in the Ural mountains. These pieces include coils, spirals, shafts, and other unidentified components.

According to an analysis from the Russian Academy of Sciences in Syktyvkar, the largest pieces found are mostly copper, while the smallest are made of tungsten and molybdenum.

While the largest of these objects measure 1.18 inches, the smallest are only 1/10,000th of an inch, and many exhibit Golden Mean proportions. Their shape suggests that they are manufactured and not naturally occurring metal fragments. In fact, they have been found to closely resemble the same miniature components of contemporary nanotechnology.

They have apparently been known and studied for some time too:

The artifacts have been studied at four different facilities in Helsinki, St. Petersburg, and Moscow. However, further research into these tiny structures seems to have ended in 1999 with the death of Dr. Johannes Fiebag, a principal researcher of the find. 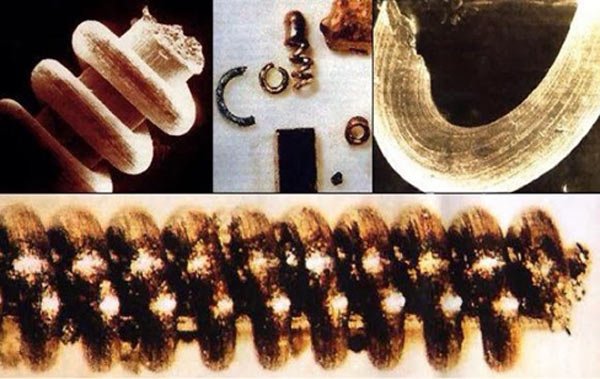 Were these nanostructures found in the Ural Mountains?

All the references I could find on the web post-date and either copy from or reference the original Epoch Times article in the link. I would guess that the original source of the information is one of the books written by Dr. Johannes Fiebag, mentioned in The Epoch Times article, trained as a geologist, but a writer of popular science books focused on speculation about extraterrestrials.

I would suggest that the correct question is not whether these were found in the Ural Mountains. It is rather whether they are in fact ancient, contemporary with the 20,000-300,000-year-old strata in which they were said to be found.

A key quote from The Epoch Times article is:

Though some have asserted that these tiny structures are merely debris left behind from test rockets being launched from nearby Plesetsk space station, a report from the Moscow Institute determined that they are far too old to have come from modern manufacturing.

The question is how is this age determined? As of 2019:

Dating metals poses an even bigger problem than dating ceramics, with currently no widely used scientific dating method. No one had found a measurable property that changes regularly with time.

There is no way to assess the parts age other than the geology of the strata where they were found. The most likely explanation is that these are modern artifacts that somehow came to be associated with old rocks, although Dr. Fiebag seemed to be convinced otherwise.

4
Did ancient people have flying vehicles?
33
Were pyramids of glass found under the Bermuda Triangle?
13
Does the Hueyatlaco site show human habitation in Mexico >50,000 years ago?
32
Did the Ancient Egyptians use twenty-sided dice?
19
Were technologically advanced artifacts found at the Durupinar "ark" site?
7
Are approximately 95% of the Mayan ruins of Palenque still buried and unexplored?
20
Have giant human skeletons been found?
3
Has a holographic library been found in tunnels under the Bucegi mountains?
33
Is this "ancient Hebrew leather manuscript" seized by police in Turkey authentic?