Bret Weinstein claimed in an interview on Triggernometry:

Did Youtube take down Dr. Pierre Kory's congressional testimony about how he treats his COVID-19 patients?

Yes, YouTube removed in February of 2021 a US Senate testimony video of Dr Pierre Kory given December 8, 2020, that largely argues Ivermectin as a treatment for COVID-19. The YouTube link now displays:

This video has been removed for violating YouTube's Community Guidelines. Learn more

This "learn more" leads to Google's COVID-19 medical misinformation policy, which is presumably the cited reason for the censorship:

[...] Claims that Ivermectin or Hydroxychloroquine are effective treatments for COVID-19

As evidenced by Senator Ron Johnson on his webpage "Youtube Censored Me": 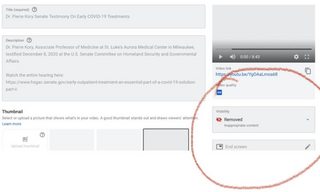 The censors at YouTube have decided for all of us that the American public shouldn't be able to hear what senators heard. Apparently they are smarter than medical doctors who have devoted their lives to science and use their skills to save lives. They have decided there is only one medical viewpoint allowed, and it is the viewpoint dictated by government agencies. Government-sanctioned censorship of ideas and speech should frighten us all.

Read my full piece on this Big Tech censorship in the Wall Street Journal: YouTube Cancels the U.S. Senate

Evidently, the 8 minute and 42 second video is still to be found on YouTube, included in various long videos on other channels. The apparent arbitrariness of the selective censorship left many curious:

Kory he was "unsurprised" [sic] by YouTube's recent actions since he was "already made aware of that testimony video being taken down from numerous other people’s Youtube channels," but questioned the timing.

"Why this week? After two months of it accumulating a massive amount of views?" Kory wondered.

A spokesperson for YouTube defended its actions, stating "We enforce our Community Guidelines considently, [sic] regardless of speaker and without regard to political viewpoints. In accordance with our COVID-19 misinformation policy, we removed the two videos in question."

If anyone is interested in precisely what Kory said in his testimony before the committee, it is also available in written form from the US Senate website, with additional 'evidence' in the form of references he used to base his statements on: Testimony of Pierre Kory, MD — Homeland Security Committee Meeting: Focus on Early Treatment of COVID-19 December 8, 2020

Not the answer you're looking for? Browse other questions tagged covid-19 social-media censorship .

3
Has Dr. Pierre Kory pioneered treatments that are now the standard of care for COVID-19 patients?

66
Do the majority of doctors in the USA support hydroxychloroquine use for covid-19?
76
Did COVID-19 take the lives of 3,100 Americans in a single day, making it the third deadliest day in American history?
3
Has Dr. Pierre Kory pioneered treatments that are now the standard of care for COVID-19 patients?
8
Did Near, a prominent emulator developer, take their own life?
27
Did China shut down a port for one COVID-19 case and did this closure have a bigger impact than the blocking of the Suez canal?